With thanks to Life Style Sports, we're bringing the Champions League team of the week, with all the stats to back it up.

Instead of having to listen to mere opinion, we've decided to team up with the good people of whoscored.com to show you the best team from a goal filled weekend of Champions League action. 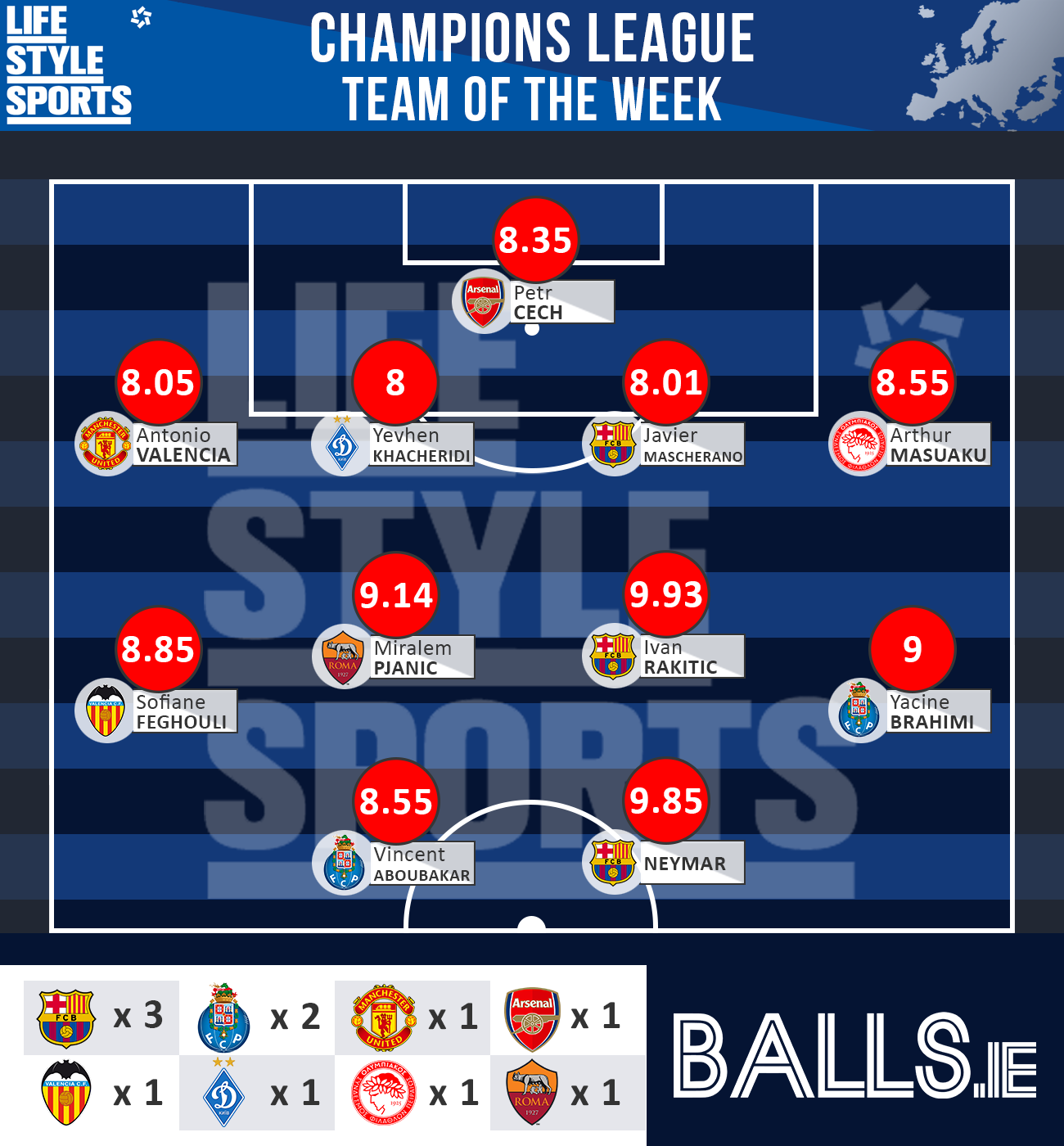 The Czech goalkeeper had a solid and assured game between the sticks for Arsenal and this will surely make Wenger question his decision to leave him out in the previous Champions League match against Olympiakos.

The converted right back was undoubtedly Manchester United's best performer in their underwhelming 1-1 draw away to CSKA Moscow. Valencia won all his tackles and had a 90% pass success. Antonio Valencia wears Nike Tiempo Legend available here

The centre half was impressive at the heart of the Dynamo Kyiv defense as he won 78% of his aerial battles. This is even more impressive considering he was up against the combative Diego Costa. Yevhen Khacheridi wears Adidas F50 available here

The diminutive Argentinian had a composed game for the Catalan club. He was his usual fearless self winning 80% of his tackles and had a pass completion percentage of 87. Javier Mascherano wears Nike Magista Opus available here

The left back had a fine game for Olympiakos in their 1-0 win away to Dinamo Zagreb. The former under-age French international impressed with his pace and dribbling ability down the wing that caused Zagreb hassle all night. Arthur Masuaku wears Nike Mercurial Superfly available here

The 25 year-old Algerian international caused mayhem for the Gent defence all night in Valencia's 2-1 win. He capped off his stellar performance with a goal. Sofiane Feghouli wears Adidas Ace 15 available here

The Croatian scored two goals and had a stormer at the centre of the Barcelona midfield. His performance is even more remarkable considering he didn't even start the match but rather came on for Sergi Roberto. Ivan Rakitic wears Adidas Ace 15 available here

The midfield maestro scored a wonderful free kick for AS Roma in their 4-4 draw against Bayern Leverkusen. This will no doubt give Irish fans some restless sleeps in the lead up to the playoff game against Bosnia. Miralem Pjanić wears Adidas Ace 15 available here

The Algerian international scored a goal and was a constant threat as Porto recorded a 2-0 win over Maccabi Tel Aviv in the Estádio do Dragão. Yacine Brahimi wears Nike Hypervenom Phinish available here

The Cameroon international had a strong game up front for Porto and his physical style complemented Brahimi's incisive running. He also scored a goal and had an 82% pass completion rate. Vincent Aboubakar wears Nike Mercurial Vapor X available here

The Rewind
9 hours ago
By Mark Farrelly
The Rewind Random Quiz: Guess The Year From The "Reeling In The Years" Screengrab
14

Basketball
13 hours ago
By Balls Team
PREVIEW: Could Dayna Finn And Maree Steal The Super League From DCU Mercy?
4