The Team That Should Start Ireland's Next Tournament Game

As the dust settles after a promising tournament for Ireland - we look at the players who cemented their places in this tournament and those who will be pushing to take the field the next time Ireland line up in a major tournament - which should hopefully be in Russia in two years' time. 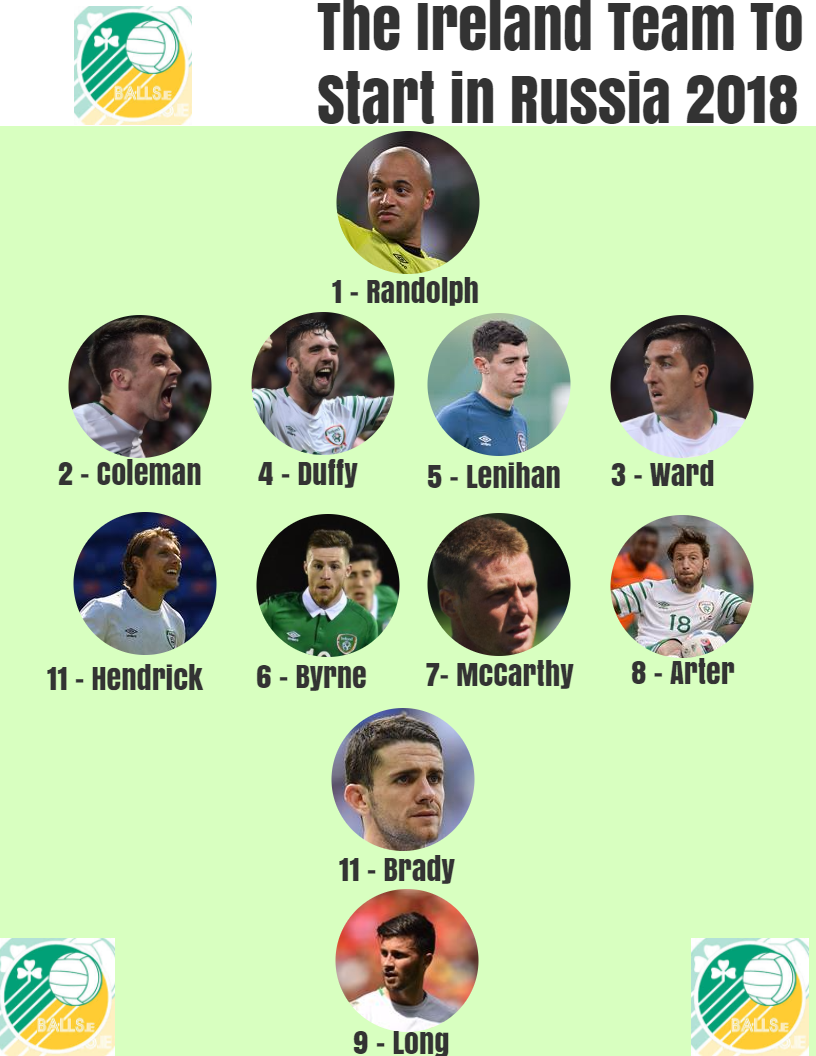 The West Ham goalkeeper will only be 31 should Ireland qualify for the World Cup finals in 2018. While he firmly established himself as Ireland's number one in this tournament; Randolph does need to consider his club future. Sitting on the bench behind Adrian at West Ham is unlikely to do much for Randolph's prospects - particularly if Kieren Westwood moves to Hull City and is playing regular Premier League football. Manchester City youngster Ian Lawlor is very highly rated by all at the Etihad and if he makes a breakthrough in the next two years - Randolph's position could be under threat.

Coleman really grew into the captain's role during this tournament and should retain the armband going into the qualifiers for Russia. The Everton man will only be 29 going into the World Cup finals so should be right in his prime. One of the nailed-on certainties for this team, despite the emergence of Cyrus Christie.

Ward will be pushing 33 when the next tournament comes around and though he acquitted himself well in France, his selection has more to do with the paucity of options than his strenghth. A year ago, it looked as if Sean Kavanagh at Fulham was best poised to make the breakthrough after making 22 appearances in the Championship but he fell out of favour at Craven Cottage and ended the season on loan at Mansfield.

Duffy will only be 26 when Russia comes around. By then he should have a lot more caps under his belt - and will have the experience to avoid situations like the one he got himself in against the French. Blackburn are not the most stable of clubs but Owen Coyle should steady things - and Duffy could see himself as part of the club's Irish contingent with Anthony Stokes and Darragh Lenihan.

It might be harsh on Richard Keogh, who at 32 will still be in contention in Russia, but Lenihan is a real prospect at centre-half. He only made his debut for Hull a few weeks ago after joining from Cork City two years ago. Injuries delayed his impact over the water but Lenihan, who will be 24 in Russia, has already been called into the Irish set-up by O'Neill - before he even made his Hull debut. He can also offer cover at right-back and it's clear that O'Neill rates him.

Debutant Brian Lenihan clears one off the line for City #hcafc #BOLHULL #0-0 pic.twitter.com/cD4xSRt7Sb

Byrne will be 22 coming into Russia so should have established himself in the side at that stage. He spent the season on loan from Manchester City at Dutch side SC Cambuur where he was compared to Wesley Sneijder. It promises to be an interesting pre-season for Byrne as he tries to catch the eye of Pep Guardiola at the Etihad and Pep sees in him what he did with the likes of Thiago Alcantara at Barcelona (and subsequently at Bayern Munich), the sky could be the limit for the young Dubliner.

McCarthy will only be 27 in Russia, so like Brady and Arter, should be in his prime. Despite being criticised after the Belgium game - McCarthy showed he operates best as the only defensive midfielder against Italy and again versus France. Somehow, the presence of Glenn Whelan dimishes McCarthy's game but Whelan will be 34 by the time Russia comes along so hopfully McCarthy can continue to prosper in his absence and make the position his own.

The Bournemouth midfielder adds a creative element to the midfield and at 28 going into Russia, is another who should be in his prime. Martin O'Neill delayed naming his squad until one hour before the UEFA deadline in part because he wanted to give Arter as much opportunity as he could to prove his fitness ahead of the tournament. Arter had a stop-start season at club level too but is a player O'Neill clearly fancies. With two years' club football ahead of him, Arter should be in pole position when it comes to Russia.

Wes Hoolahan will be 36 coming into the finals in Russia so it could be time to hand the creative reins over to Brady, who will only be 26 coming into the tournament. Brady is being strongly linked with a move to Leicester City so could have Champions League experience under his belt too.

The Tipperary man will be 31 by the time Russia comes around so he should still be near the top of his game. Long started later than many strikers of a similar age. In his ten years in England - Long has only played 374 games - with less than two-thirds of those games coming as a starter. Long should have plenty left in the tank to lead the Ireland attack in Russia.

Hendrick was, along with Robbie Brady, Ireland's best performer in France. He has caught the attention of many in the Premier League and even Serie A and should have the benefit of another two years first-choice football under his belt for Russia where he will only be 26. Callum O'Dowda - who played a wonderful cameo against Belarus in Ireland's last warm-up game for France will also be in contention along with the ever consistent James McClean.