The Top 10 Football References In Only Fools And Horses

There remains much confusion over which football team Derek 'Del Boy' Trotter supported. It's made plain that his mother was a Charlton Athletic supporter (for the purposes of a joke about Rodney's middle name) and that their old dad was a hopelessly optimistic Millwall man. 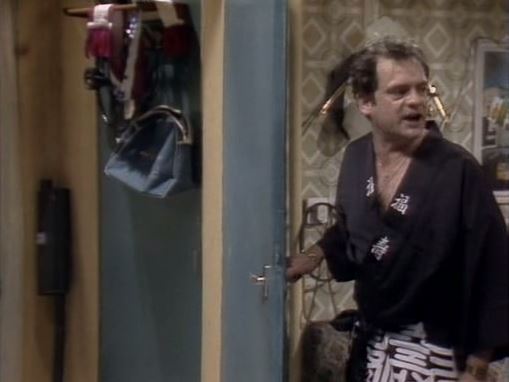 There was what many attest to be a Crystal Palace scarf hanging limply in the hallway in the early episodes (see above) but the club's name is never mentioned after that. A throwaway comment seems to peg Rodney as a Chelsea fan. But Del, we don't know. One is tempted to conclude that his Thatcherite, win-bar loving, yuppy pretensions incorporated a disdain for the sport but this doesn't seem quite true...

Until we get to the bottom of this, here are the ten best football references in Only Fools and Horses.

1. Boycie has no grounds for complaint here.

This episode was screened in 1982.

This would be the equivalent of responding to a Chelsea loss in 2014 by blaming it on the decision to let Gavin Peacock go.

3. In a tumultuous thirty minutes, Del Boy fell in love, proposed marriage once more, only to be left jilted at the end. During the course of the episode he predicted that Heather's son was destined for an international career. He proceeded to express his low opinion of the crop of players Ron Greenwood had to work with in the early 80s.

4. An episode that jammed a couple of football references into it. The brief reconciliation with Slater led to a bout of nostalgia where they recalled their underage football careers. The ever humble Del Boy described himself as a midfield dynamo in the mould of Paul Gascoigne, then at the absolute peak of his powers.

5. Del feels he has some sense of what it is like to be winded by a John Barnes free kick, which are described, somewhat curiously, as 'short and curly.

6. Grandad reckoned old Reg Trotter's prophesies about Milwall cast doubt on his powers as a clairvoyant.

7. Rodney derived his middle name from his mother's club

8.  A topical reference to hooliganism during their eventful sojourn in Benidorm in 1982.

9.  Del Boy was familiar with the staff down at Stamford Bridge

10.  Post-Italia 90, Del was more concerned about England's fortunes. His outrage at the referee's performance in the England-Yugoslavia match was palpable.