This Weekend Could See Some Major Transfer Movement At Man United

Aside from the arrival of Memphis Depay in May, Manchester United have been relatively quiet in the transfer window this summer, but this weekend could see the beginning of overtime hours being clocked in United's HR department.

David de Gea has long since been linked with a move to Real Madrid, and the Daily Mail report that De Gea has jetted into Madrid on vacation, fuelling reports that he is edging closer to a move to the Bernabeu. For those of us who like to critically analyse a player's social media posts, De Gea posted this potentially significant picture on twitter: 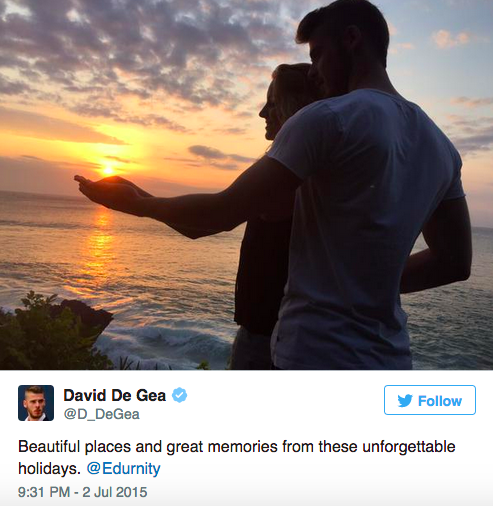 Should De Gea join Real, it seemes likely that Sergio Ramos will go in the other direction. It was reported last week that Ramos has told Real Madrid he wants to leave the club, and Sky Sports reported five days ago that United lodged a 28.6m bid for the Spanish defender. The bid was rejected, but it is expected United will return with another offer. According to Marca, things are at breaking point and the next few days could be crucial.

Ramos again on front page of MARCA. Reckons he's livid, won't back down and wants to go. Says it's not about money. pic.twitter.com/mDNA4upFyO

Elsewhere, United have been linked with a raid on Louis Van Gaal's former team Bayern Munich, particularly with Bastian Schweinsteiger. When quizzed on the link Pep Guardiola responded thusly:

If Schweinsteiger wants to stay here then that’s perfect. He’s a top player. Of course I am planning to work with Basti next season. Basti has to decide. Basti has managed a great career. He must decide what he does alone. I told him, the future depends on you.

Schweinsteiger is now 30, and it is possible that working once more under Van Gaal appeals to the German. It was Van Gaal who converted Schweinsteiger from winger to a world cup winning central midfielder. United have also been linked with his club and international teammate Thomas Muller, but Bayern are, understandably, extremely unwilling to sell even though it would more than likely mean United would have to break their transfer record to sign him.

The man who currently holds that record, Angel Di Maria, has been linked with a move away from Old Trafford. Paris Saint Germain this week learned that their Financial Fair Play restrictions regarding player recruitment have been lifted, and are reported to celebrate this by splurging vast amounts of cash on Di Maria. L'Equipe among others are reporting that PSG have made Di Maria their top priority: