Tony Cascarino And Andy Townsend Thought Charlie Haughey Was A What Now!? 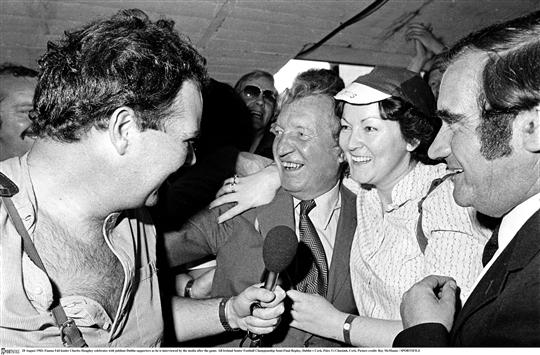 We haven't got to the episode where Aidan Gillan strides around the Stadio Olimpico with a tricolour in his hand (last night's instalment of 'Charlie' only ran from 1979 to 1981) but hopefully the makers won't overlook this important event in Charlie's career.

Fresh from his stint leading the EU Presidency, Haughey landed in Rome for Ireland's World Cup quarter-final with Italy. After the 1-0 defeat, he arrived down to the Irish dressing room, flanked by old pal and cabinet minister Brian Lenihan (Senior).

Niall Quinn, in a story which may be apocryphal and is surely embellished, described the scene when the Taoiseach said his piece to the Irish heroes of 1990.

If Quinny's story bears any relationship to the truth, then Haughey, a big nationalist and an even bigger egotist, can't have been too pleased by the reaction of the lads with English accents.

Those of us brought up in Ireland stood there in amazement and he made a speech about the sporting sons of Ireland. It was hair-standing-on-the-back-of-neck stuff. Tony Cascarino was behind me and said loudly 'Who the f**k is that?' ruining the moment.

I thought, Oh my God, and said 'that's the Taoiseach' and Andy Townsend was beside him and said really loudly again 'Who is it, Cas?' and he said 'I don't know, Quinny said he owns a tea shop'.

We cannot confirm whether Townsend or Cascarino have brushed up on their knowledge of the Irish offices of state in the intervening years.