We make no secret of it here at balls.ie, we absolutely loved everything to do with Pro Evolution Soccer.

Well, maybe not everything. PES 3 was the beginning of something truly special, and PES 6 was seen as the last great adventure for Konami's football simulation, so the "glory days" as it were fell between the years of 2003 and 2007. 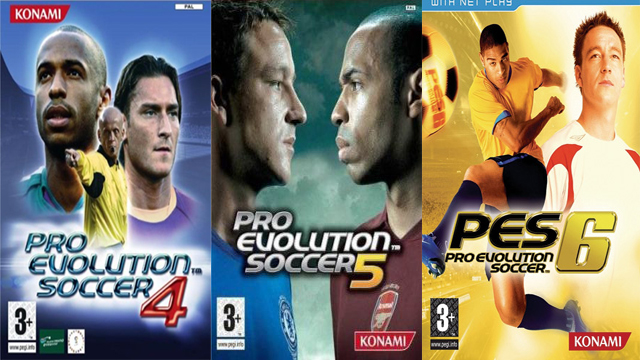 But one thing is for certain, the music in those games was something truly unique, and for anyone who spent as much time in the menus of those games we did, then you grew to love those so-bad-they-were-good blends of trance, funk, and j-pop. EA Sports and the FIFA franchise splashed the cash on fancy tunes from "real artists" and "bands", but it never had the soul that Konami's in-house music team could provide.

It has taken much deliberation, and a seriously bloody enjoyable hour on YouTube, but we can finally present to you our Top 5 Pro Evolution Soccer soundtrack songs.

If you were a true, hardcore PES fan back in the days of PES 4, then you no doubt spent hours in the Edit Mode making sure all the Premier League teams had accurate names, kits, and badges. If that was the case, then you would have loved the epic thumping drums and the eerily beautiful drawn out guitar riffs of the Edit Mode music.

The intro to PES 4 was great. The animation was brilliant, and it was just an all-round enjoyable experience. The music also had a key part to play, as it's cheerful melody rang through the ears of everyone who played the game. This one surely has a special place in the heart of anyone who left the 'Press Start' screen on when everyone fell asleep at a sleep-over/KO'd at a session/fell asleep on the couch and inadvertently listened to the thing on repeat for around 6 hours.

Bruno Mars knows absolutely nothing about funk. This is true funk. Countless hours were spent editing minor details and bopping along to this absolute master-piece in the PES 5 edit mode. Just listen to that sax, it's a work of art.

If you say that you didn't shout "GABBADALOODALAY!" along with this absolute clusterfuck of awesomeness then you are quite simply lying. This song (which is titled "Existence", by the way) always got you in the mood for some Pro Evo, and a Random Select Match in particular, as it was the only game mode crazy enough to do this little number justice.

The daddy of them all. PES 5 was the first Pro Evo that Konami put lyrics in the music, and these lyrics were absolutely poetic. What were the words exactly? We don't know. There were three schools of thought:

I'm so obssesed about you... I'm so obsessed! Wow!

I'm so obssesed about you... I've soiled myself! Wow!

But it doesn't really matter which one you sang, the important thing was that you sang, and boy did you sing. What a great tune, it instantly brings you back to a firm grip on that PS2 controller as you nervously click into Team Management to see which of your superstars you couldn't play because they were on a 'Down-Grey' form arrow.

See also: REVIEW: Pro Evolution Soccer 2015 – The Return Of The King?
See also: What Made Adriano So Damn Good In Pro Evo? A Statistical Analysis

Gaming
3 years ago
By Balls Team
Watch: Reacting To The Irish Player Faces In PES 2018
47