Picking up on a conversation from last weekend's Saturday Sport on Newstalk, Ger Gilroy discusses the 5 best sporting event he's seen in person. 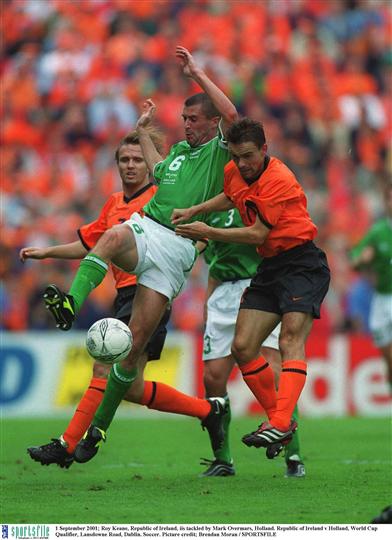 Scrawled at the bottom of a list I have stuck to the fridge door in our kitchen, in barely comprehensible handwriting, is the message "DON'T MAKE LISTS – THEY ONLY SHAME YOU". I'm not much on heeding my own advice so today I offer you a list of the Top Five Sports Events I've Been To (or TFSEIBT). I'd like to claim a trademark on this but really it's the result of a piece I read on Grantland.com which I'll link to when I can find it again.

That piece made the argument that watching sport on television is now in many cases preferable to watching sport in person - it's an argument I'll return to sometime when I've thought it through a bit more.

One thing about the list - I've tried to pick five sports events that I wasn't there for in a professional capacity (as you'll see I failed.) I was a cub radio reporter for FM104 for the entire 1998 Kildare campaign, I was at the Meath-Kildare '97 saga and almost all of the great hurling games in the early naughts. I was getting paid to go to. As for recent ommisions, I've been working weekends for the past couple of years. I'm sure Tipperary-Kilkenny in 2010 would have made list had I been at the game because of the sheer brilliance of the match. Likewise Bernard Dunne winning the title at The Point was just an incredible night of sport but I was commentating on it and feel that kinda misses the point of the piece. 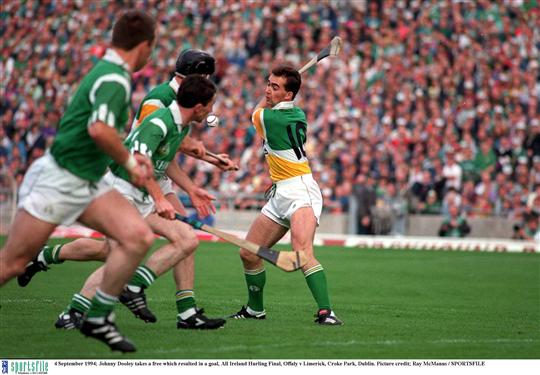 I was 17 and an Offaly fan. Growing up a hurling fan in Kildare with parents from Antrim, we always supported the Leinster team. While there was respect and awe for Kilkenny, there was genuine love in our house for that Offaly team.

As an aside, it seems to be a peculiarly northern thing to support the provincial team in Croker though I think it's an enlightened sports fan who will transfer allegiance to a provincial team left in the Championship as opposed to silently hoping your neighbour fails. We did break that rule if ever Galway were involved because they were the closest thing spiritually to Antrim, our real team, but that would never be relevant on All-Ireland final day.

The Limerick fans around me were annoyed. So they rubbed it in, in that gentle style Limerick folk have of letting you know they're superior to you in every imaginable way.

For 60 odd minutes, they were loud and had the air of the bully about them – saying things they didn't believe to be true but hoped they could make true by mere utterance.

And then they were quiet.

It was an incredible event to witness: their stillness and heartbreak justified in my teenage mind. The Guinness music blared out on the PA as we all poured on to the pitch and I really did believe my teams would always have the power of incredible comebacks. Not a good betting strategy.

The Italian fans were amazing but the German fans were even better, given they'd anticipated going out in the previous round when Pekerman refused to put Messi on to attack the tiring German defence, so here they were in bonus territory and dreaming. Afterwards there was no recrimination from the Germans I spoke to, just delight that this young team had done the country proud. There too were Pirlo and Gattuso, with an immense display of controlled passing that I'd never seen to that point – now we see Xavi and Iniesta dominate games and it's normal but then it was mesmeric.

They were human metronomes. 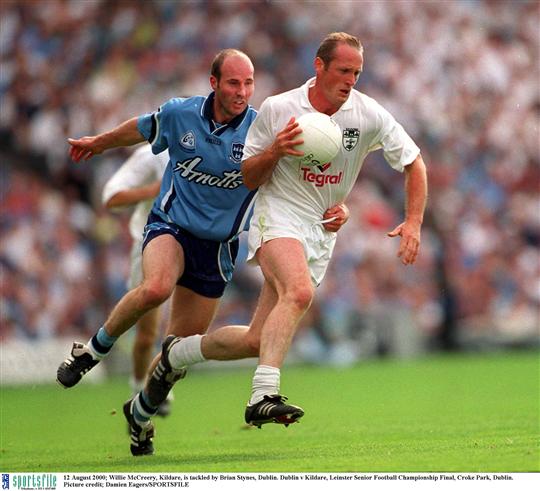 Again, it was a game I went to on my own. I'd low expectations heading in. Kildare had kicked a last minute wide in the drawn game and we'd seen that film before. The first half was drifting along with Dublin winning all the individual battles and seemingly set for a semifinal against Galway as they went in 6 points up. Within two minutes of the restart, Early and Fenin had stuck the ball in the Dubs net, right in front of the Hill.

I was hugging strangers in the Canal End, directly at the opposite end of the field. I have no idea how the goals were scored or what actually happened.

This win meant 1998 hadn't just been a one-season thing, that the team were worthy of football in August. In one afternoon, an entire generation of Kildare fans changed their outlook. Of course we haven't won Leinster since, but for the fans there's at least a culture of belief and statistical recorded history of winning written down in the record books. And it was against Dublin at Croke Park. With two goals in a minute. In front of The Hill. 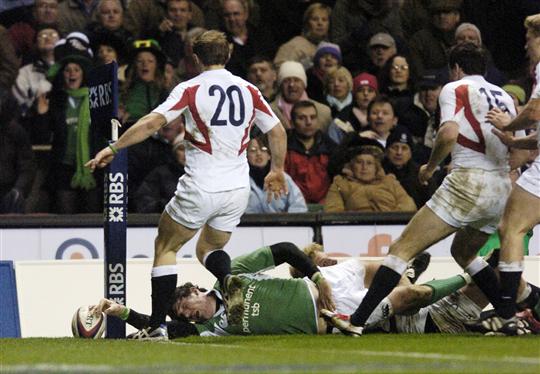 This is the year France went 43-3 up and beat us 43-31. It's the year France lost to Scotland and needed a converted try and a late penalty to beat Wales which wrapped up the Championship before kick off at Twickenham. It was also the first time I'd been to Twickenham.

It's amazing – a real homely atmosphere where people cook massive roasts in their front gardens and sell you roast-in-a-roll and homemade cider and might even offer you a nip of whiskey depending on how cold it is. Our tickets meant we're around the ground and separated so I found my seat beside this giant Londoner who's about 18 stone, a hulking black man, wearing only an Irish t-shirt. It's freezing but he doesn't care.

We became friends as we ran up and down the steps in the moments after the Horgan try was awarded. The best part about it was that we could see O'Gara and O'Driscoll plan the move - or at least discuss the possibility of the kick through, chase and pass to Horgan - right in front of where were sitting. The old O'Gara instructions, using the ball as a shield from the opposition shot.

It worked. We won. Like beating the Dubs at Croker to the power of ten. 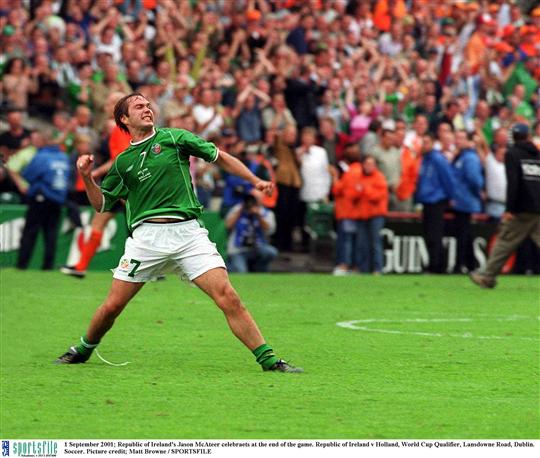 Prelapsarian. This was the afternoon of the evening when Michael Owen scored that hat-trick against Germany that made Sven Goran Eriksson rich beyond his wildest dreams. It was ten days before September 11. It was the old Lansdowne Road and Mick and Roy were still talking, just about. I've never sat down since and watched this game through. I might just about be able to bear the tension now.

The only thing that mattered that day, and indeed right up to Saipan, was that we had Roy Keane and he was the best there ever was. In any conversation with any fan of any team in the world, we always had a trump card.

That was his finest day for Ireland.

Others argue that the game against Portugal was an even greater performance from Keane, that Figo's side were slightly better than the Dutch, that he crowned that performance with a goal. Whoever's right, it's a beautiful argument to be involved in: 'No I think Keane was better when he was rampaging against Rui Costa than Van Bommel and Kluivert'. I'm happy to spend an hour parsing the nuances with anyone who wants to.

The fact that we'd guaranteed a play-off place that day in front of the amazing Dutch fans, and against Van Gaal and the bones of that Ajax team from '95. The weather, U2 in Slane, a summer in 2002 so ripe with potential.

Don't make lists, they only shame you. Feel free to shame yourself in the comments below I'll respond in a couple of days when I get a chance. Or hurl your abuse to me on twitter @gergilroy