In what has been the most drawn out saga since Lost, Paul Pogba finally looks set to join Manchester United after The Express have reported that the Frenchman has touched down in LA to complete his medical. It's not over the line yet and until his name is on the contract, the world will continue to wait with bated/exasperated breath.

The Mirror are reporting that Manchester United are making a move for West Ham's Dimitri Payet. Inter Milan are also interested and Payet should cost somewhere in the region of £50m. Nice little profit for West Ham if they decide to cash in.

France Football are reporting that Man United are not abandoning their pursuit of Payet.

Although let's be real, there's more chance of Luke Chadwick re-signing for United than Payet joining signing for them but hey, if United don't get linked to the best players in the world every transfer window is it even a transfer window? 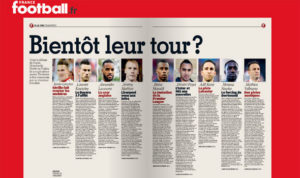 The Guardian are reporting that Arsenal are not going to go above a laughably precise £33.7m for Alexandre Lacazette.

However, Wenger is willing to spend to get a defender; Shkodran Mustafi could be on his way t Arsenal for a fee believed to be around £34m, some way shy of his £42m release clause.

The Sunderland Echo are reporting that Sunderland are close to a £20m deal to sign Benfica's Eduardo Salvio. The Black Cats are reportedly operating with a tight budget in this window so Moyes will need to be sure that he wants and needs the Argentine international.

According to The Guardian, both Arsenal and Liverpool are interested in signing Jese Rodriguez from Real Madrid, although Zidane is not interested in selling.

Barcelona have made a bid of £15m for Ayoze Perez although Newcastle are not prepared to sell. They're trying to keep a Spanish native on Tyneside when the Catalan giants come calling. Good luck with that.

Manchester United are in the process of a significant clear-out and Mourinho is carrying over his Chelsea tradition sending players out on loan, Adnan Januzaj, Andreas Pereira and James Wilson among those being loaned out.

Liverpool been dealt a blow in their pursuit of Leicester City's Ben Chilwell. The left-back signed a new 5-year deal with The Foxes which means that Klopp may have to get comfortable with the fact that he will have to put all of his eggs in Moreno's shaky basket.

Jurgen Klopp has had a dig and United and their spending policy saying that he would never spend £100m on a single player. "Hello officer, I'd like to report shots fired."