Troy Parrott and Gavin Bazunu continued their fine starts to their respective League One campaigns with strong performances last night.

Parrott scored one as MK Dons ran out 2-1 winners against Charlton Athletic, as Bazunu kept a clean sheet in Portsmouth's 1-0 win home win over Shrewsbury Town.

The strong performances follow impressive showings from many other Irish players plying their trade in the English third-tier last night.

Parrott opened the scoring for his side last night after they fell behind in early in the first-half.

The Dubliner pounced on a deft through ball from former Waterford midfielder Scott Twine to slot home into the net.

That goal proved to be the catalyst for MK Dons to make their way back into the game, and they would clinch the win thanks to a Mo Eisa winner.

It was their first league win of the season, with the victory sending them into 12th in the League One table.

Speaking after the game, new MK Dons boss Liam Manning spoke of his excitement with his front three that includes Troy Parrott.

"I think we have a really good blend," he said.

"We’ve only been in a couple of games together and it’s a completely new front three.

"It’s really exciting when you see the variation in play.

"They really excite me and I hope the fans are the same. They were terrific tonight."

'Bazunu did what top goalkeepers do'

It wasn't just Parrott who impressed his manager last night, Bazunu did as well in a big win for Portsmouth.

Portsmouth boss Danny Cowley stressed that the Manchester City did what all top keepers do best as they ran out 1-0 winners.

"Gavin Bazunu did what top goalkeepers do," he said. "He hardly had a shot to save, but when called upon made a brilliant stop late on.

"We’re pleased to win and keep accumulating points, although there’s a lot of learning for us and plenty to improve on."

It was a game where Pompey also relied on their Irish players at the top end of the pitch.

Meanwhile, in the Championship, Alan Browne played the full ninety minutes as Preston nabbed a 1-0 win against Huddersfield Town. 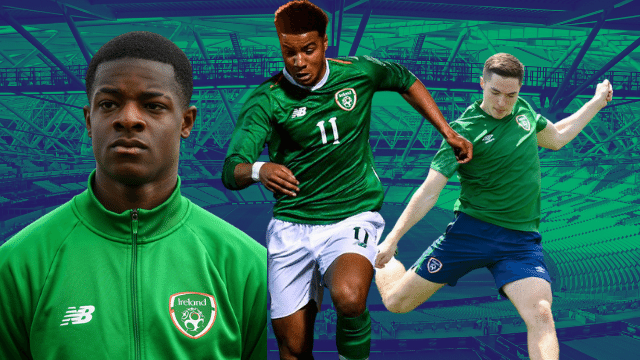 Football
5 months ago
By Andrew Dempsey
Report: James McClean Set To Join League One Side After Stoke Contract Terminated
Football
1 year ago
By PJ Browne
Heartbreak & Cringe: 9 Standout Bits From 'Sunderland Til I Die' Season 2
Football
2 years ago
By Maurice Brosnan
Six Irish Managers Abroad Who Could Have A Big 2019/20 Season
Previous Next

Football
5 months ago
By Andrew Dempsey
Report: James McClean Set To Join League One Side After Stoke Contract Terminated
Football
1 year ago
By PJ Browne
Heartbreak & Cringe: 9 Standout Bits From 'Sunderland Til I Die' Season 2
Football
2 years ago
By Maurice Brosnan
Six Irish Managers Abroad Who Could Have A Big 2019/20 Season
Popular on Balls
Rugby
3 hours ago
By Colman Stanley
The Terraces Won't Forget: Ian Madigan At Leinster
Basketball
12 hours ago
By Eoin Harrington
Kieran Donaghy And Tralee Warriors Claim National Basketball Cup Title In Tallaght
Rugby
13 hours ago
By Colman Stanley
Michael Lowry Backs Up Farrell's Faith In Him With Superb Display For Ulster
Rugby
16 hours ago
By Colman Stanley
Jimmy O'Brien Announced His Arrival On The Biggest Stage This Afternoon