The buzz around Stephen Kenny's talented U21 side continues to grow as they secured a remarkable 3-1 win away to Sweden in their Euro 2021 Group One qualifier.

It had a mix of everything. The Irish side went away and had steel and skill in equal measure to land a huge result. 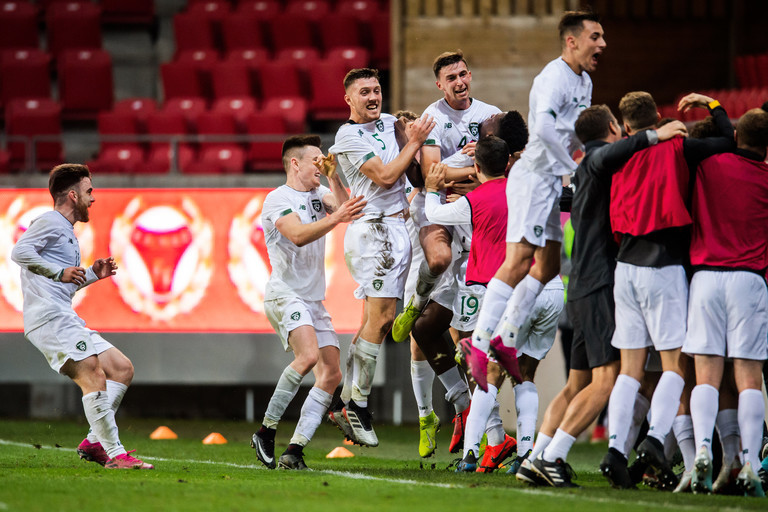 Once again, it was Spurs sensation Troy Parrott who scored as Ireland continued to build on their good form. Coming into today's game, they had back-to-back victories over Luxembourg and Armenia.

The goal came shortly after Brighton's Aaron Connolly missed a penalty. Ireland went behind in the first half but had chances aplenty to equalise. Danny Mandroiu and Connolly were both denied after well-worked opportunities failed to find the net.

Ireland pushed for a late winner, with Connolly cutting off the left wing to fire into the side-netting. Kenny cut a man determined to secure all three points and introduced striker Adam Idah in the final ten minutes in place of Jonathan Afolabi and ultimately, their class shown out with a Conor Masterson header from a corner making it 2-1.

What a header and look at what it means to the squad ?

It was left to Troy Parrott to finish it out in style. A breakaway run saw the 17-year-old race down on goal and once he sorted out his feet, a cool chip made the deserved win safe.

Pure ? as Stephen Kenny's side turn on the style in Sweden ?

The result means Ireland now sit in the promising position of nine points from three games. Many questions were asked of this young side during the biggest test of their campaign so far and they answered every single one of them. A sensational performance and superb result.