First week of Europa League action for SSE Airtricity League clubs and all 4 teams are still in the hunt for progression. Some are in better shape than others but let's have a look at what we've learned this week.

UCD claimed the result of the week with a terrific 1-0 win at home to Dudelange of Luxembourg. Dudelange have a decent European pedigree having beaten Red Bull Salzburg of Austria in the Champions League 3 years ago. Their team contains several internationals (not all from Luxembourg) and they were heavy favourites with bookmakers all across Europe.

UCD, currently 3rd in our First Division, used 12 players last night and their average age is 21 years and 11 months old. The goal scorer Ryan Swan turned 19 in May and is having a great first season with the club with 10 goals in 11 starts. Older LOI fans will know his dad Derek of Bohs and Rovers fame.

Having had to listen to crap about their "Fair Play" spot being a potential embarrassment for the League, they've every right to crow about this result. Dudelange are still favourites to progress but if UCD can score again, they'd be confident of not conceding 3.

#UCD gaffer Collie O'Neill says all the tweets slagging off UCD before the game were used to motivate the players #Europaleague — Stephen Doyle (@dubsoulrebel) July 2, 2015 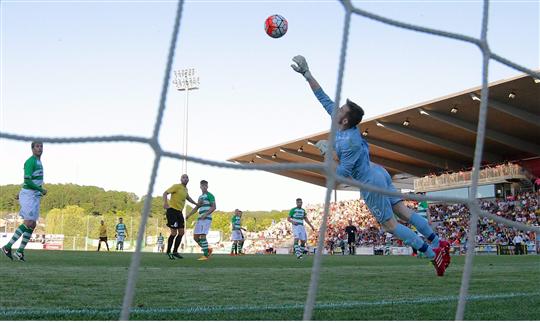 Shamrock Rovers drew 0-0 away to Progrès Niederkorn of Luxembourg on Tuesday. It was a tough game for the Hoops with keeper Craig Hyland making 2 important saves in the second half as the heat caused Rovers to tire. Injuries deprived Rovers of the 2 players most suited to European football in Stephen McPhail and Keith Fahey and in a sign of how thin their squad was they brought youngster Cian and Dylan Kavanagh off the bench.

In the early exchanges Rovers were in control and Mikey Drennan hit the post. Rovers will be confident that they'll have enough to win in Tallaght on Tuesday night. Pat Fenlon's sides are always pretty defensive away from home but you'd have to think they'll adopt a more positive approach knowing a win of any kind is enough for them to progress.

St Patrick's Athletic took the lead away to Skonto Riga of Latvia with this smart Aaron Greene finish. They couldn't maintain their excellent start and lost 2-1 on the night with their hopes of progressing hanging on by that crucial away goal.  A combination of poor defensive lapses and unlucky injuries gifted Skonto 2 goals and Pats will feel they can beat the Latvians in Richmond Park next Thursday.

A major stumbling block to that may be the three injuries sustained by the Saints last night.  Captain Ger O'Brien went off at half time. Star centre back Sean Hoare looked to pull his hamstring in the lead up to the winning goal and striker Christy Fagan turned his ankle with 20 minutes to go. If they want to have any real chance of progression, they'll need Fagan and O'Brien out there as both are crucial to their style of play. 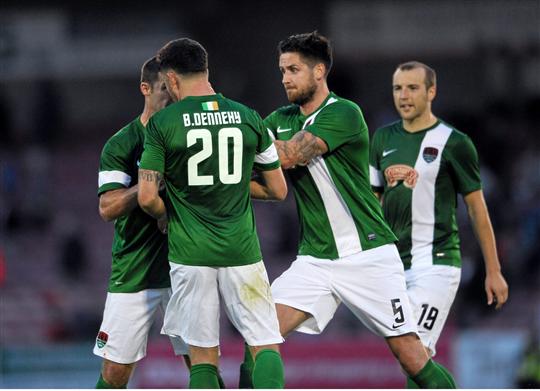 Cork City drew 1-1 with KR Reykjavik of Iceland in Turners Cross last night. Alan Bennett flicked home Billy Dennehy's cross to give City the early lead before KR equalised just before the half hour mark.  After a very tight contest, KR will be much happier with the result and the seeds will be confident of going through next Thursday (live coverage on Setanta Ireland BTW). Most online chatter last night related to an altercation between Billy Dennehy and Mark O'Sullivan, with Billy's brother Darren getting involved too.

Outside the ground, there were plenty of Cork City fans happy to blame Dennehy and back O'Sullivan.

As pictures emerge, it became less clear who the aggressor was. While team mates fighting isn't a new thing, it showed a sense of frustration within the City ranks at yesterday's result. Manager John Caulfield played down the incident telling the assembled media;

I wouldn’t worry about that, maybe they should square up to each other more often but it was just a bit of frustration. I have that every second day of my life so I wouldn’t worry too much about it.

Caulfield has been quick to play up how passionate and committed his team is since getting the job as manager. He'll have to do a helluva job if Cork are to travel to Iceland and get a win next Thursday.

The Europa League week starts again on Tuesday in Tallaght with Rovers v Progrès Niederkorn kicking off at 8pm. On Thursday the only LOI club at home is St Pats who take on Skonto with a 7:45 kick off. First in action on Thursday is UCD with a 5pm (Irish time) kick off in Luxebourg. Cork's tie in Iceland kicks off at 8:15 our time. All 4 could progress but as ever, 2 Irish sides progressing is a decent return.