UEFA's position on the rainbow flag in Munich continues to dismay and disappoint.

Their handling of the request by the city of Munich to light up the Allianz Arena with the colours of the rainbow flag ahead of Germany v Hungary tonight has been tonedeaf and in clear opposition to its own position on inclusion and diversity. The refusal of the request keeps UEFA in Viktor Orban's good books as UEFA clings to an impossible position of neutrality at the risk of causing any offense. Yet the whole point of the rainbow flag is that expresses solidarity with LGBTQI+ people in their on-going battle for equal rights. UEFA is only delighted to drape the rainbow flag around itself and all over its social media avatars, until of course, it comes to the time that it might ruffle feathers. Supporting LGBTQI+ rights is political.

Unfortunately, UEFA has made the situation worse by releasing a hamfisted statement trying to explain its position.

Some people have interpreted UEFA's decision to turn down the city of Munich's request to illuminate the Munich stadium in rainbow colours for a Euro 2020 match as political. On the contrary,  the request itself was political linked to the Hungarian football team's presence in the stadium for this evening's match with Germany.

For UEFA, the rainbow is not a political symbol, but a sign of our commitment to a more diverse and inclusive society.

UEFA's stance was clear yesterday. It's unclear what they thought would be gained from defending itself. Its position on the rainbow flag is at odds with most people who campaign for gay rights. The statement has been pilloried across social media and quickly ratioed.

Yesterday the Mayor of Munich released a statement highly critical of both EUFA and the DFB over the the decision to forbid its request..

"I find it shameful that UEFA forbids us to send a message here in Munich for openness, tolerance, respect and solidarity with the LGBTQI + community.

"I am also very disappointed that the DFB (the German football federation), despite the unbelievably clear positioning here in Munich, in Bavaria and also in Germany, has not achieved or wanted to achieve anything.

However, as has been said, what exactly is stopping the good people of Munich from lighting up the stadium? Surely UEFA interns aren't monitoring the electrical output in the Allianz Arena mainframe.

Thousands of rainbow flags will be distributed to fans attending the game. There is a growing clamour on social media for the stadium to be lit up any way. 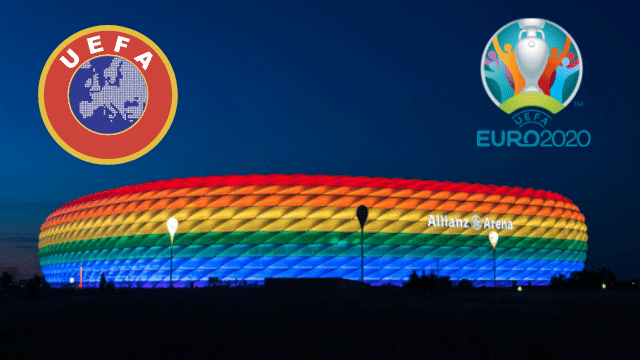 Football
1 week ago
By Eoin Harrington
How To Get ITV In Ireland For The FA Cup Final
Football
2 months ago
By Eoin Harrington
Watch: Christian Eriksen Makes Heroic Return To Football For Brentford
Football
3 months ago
By Jonathan Byrne
'I Won't Change My Style Of Play' Christian Eriksen Relishing Brentford Debut
Popular on Balls
Football
1 day ago
By Gary Connaughton
Latest Spurs Transfer Rumour Could Be Good News For Gavin Bazunu
Golf
3 days ago
By Gary Connaughton
Padraig Harrington Glad He Didn't Have To 'Make A Decision' On Saudi Golf League
28