Since the transfer window was made compulsory by FIFA back in 2002, Manchester United's activity on Transfer Deadline Day has been a constant - if occasionally farcical - source of intrigue for Premier League fans.

On the one hand, United can generate exactly the kind of drama Sky Sports are looking for; they signed Wayne Rooney on Deadline Day in 2004 for £27m. They signed Dimitar Berbatov on the same day in 2008 for £30.75m. In 2013, they paid over the odds for Marouane Fellaini having botched an entire summer mulling over moves for Cristiano Ronaldo and Thiago Alacantara. Last summer, they smashed a proverbially wayward effort through the closing window when they made an unforeseen move for Radamel Falcao from Monaco, while also attaining the services of Daley Blind from Ajax.

On the other hand, United can generate exactly the kind of drama Sky Sports are looking for; Remember the impostors that put a kibosh on the Ander Herrera deal back in 2013?

With Di Maria gone, Adnan Januzaj off to the Westfalenstadion on loan (because, as we all know, if a physically slight no.10 thrives in Dortmund, he's destined for success at Old Trafford) and Javier Hernandez presumably set to continue to resemble a child star who discovered the true horrors this world holds about three years too young over at Bayer Leverkusen, Ed Woodward - whose stock has once again plummeted dramatically since his 'genius' recruitment of Morgan Schneiderlin and Bastian Schweinsteiger - has another busy day ahead.

And Manchester United's official website want you to be able to deal with the all the drama, or lack thereof, that looks set to unfold, or not.

Here are some of their rather amusing tips for surviving Transfer Deadline Day, including a couple of 'playful' jabs at social media and '24 hour news coverage':

Beware the rumours: Our club dominates the sporting news agenda on a daily basis and at a time when the squad is evolving, we must accept our place in the eye of the storm. Modern journalism has also recognised fans' hunger for transfer updates, and monetised it with rumours that boost certain apps, websites and Twitter accounts. So when you read an explosive headline, or so-called breaking news, check the source and its credibility.

All that's missing is the hashtag, '#AgainstModernJournalism.'

Clean up your timeline: Twitter is a brilliant source of news, but for every must-follow account there are many more that post 140 characters of speculation, particularly on deadline day. Therefore, I suggest scrolling down your followers list and unticking those you do not trust or know. It's a simple way to avoid tweets such as, 'Cristiano Ronaldo has just been spotted at Manchester Airport, wearing a United shirt and flagging a taxi to Old Trafford!'

The Ronaldo quote has since been deleted, meaning the 30-year-old will almost certainly be a United player by close of business today.

Turn the TV down: Deadline day was compelling viewing when it was introduced back in 2002/03, but the 24 hour TV coverage can become slightly repetitive. There are only so many times you can watch a bedraggled reporter outside a training ground, reminding reporters that absolutely nothing has happened. You may wish to mute.

Bitchy enough, lads. Who could you be talking about there?

The quotes do seem a bit un-United-like, especially from the club's website, but - correctly assuming they'd be edited almost immediately - we managed to grab a screenshot. How's this for a credible source? 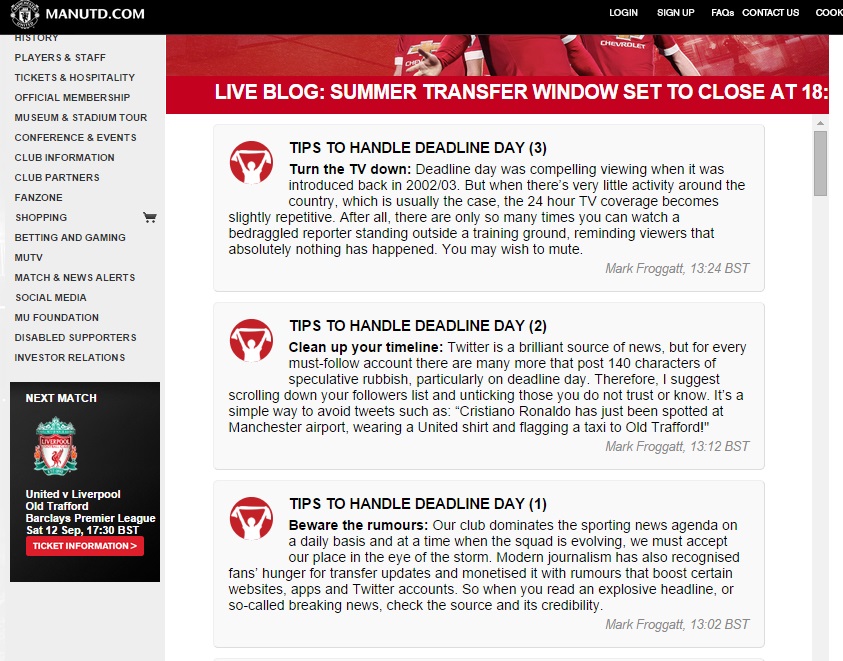 Football
1 year ago
By Michael McCarthy
How Did The Big Names Vote At The FIFA Best Awards?
2

Football
11 months ago
By Balls Team
Watch: Cristiano Ronaldo Scores Winning Header After Extraordinary Leap
Football
1 year ago
By Michael McCarthy
How Did The Big Names Vote At The FIFA Best Awards?
Football
1 year ago
By Aonghus Ó Maicín
Watch: Son Of Cristiano Ronaldo Scores Seven Goals Before Half-time
Popular on Balls
GAA
21 hours ago
By Gary Connaughton
Mickey Harte Has Been Appointed As The Manager Of Louth
1