View From A Dublin Pub: There Were 3 Distinct Reactions To Ireland's Brutal 2nd Half

There were a couple of proper cheers in Murray's Pub in O'Connell Street this afternoon. The first one was when John O'Shea won the toss against his Belgian counterpart. The other was when Belgium had a goal ruled out for offside in the first half. That was about it.

It was clear early doors that this was going to be a very different game from Sweden, more in tune with the kind of game we've grown accustomed to since the beginning of the Trap era.

Watching Ireland play in those kind of games is a grim business.

It is about survival. The type of game where one spends every minute praying nothing will happen. In the words of the man beside me - 'No news is good news'.

It was hard work getting into the livelier pubs around the city centre this afternoon. There were lengthy queues outside nearly all the big sports pubs in the hour before kick-off. The Fibber McGee's-Murray's shared beer garden boasted a big screen. But the concourse was wedged a full half hour before kick-off. No access.

Had Ireland prevented the concession of that first goal, it's easily conceivable that we might have escaped with a scoreless draw. After all, we endured far more sustained pressure in Moscow in 2011. Unfortunately, shit did happen in the second half.

As the game ran away from Ireland, the reactions of those in the pub can broadly be separated into three categories. 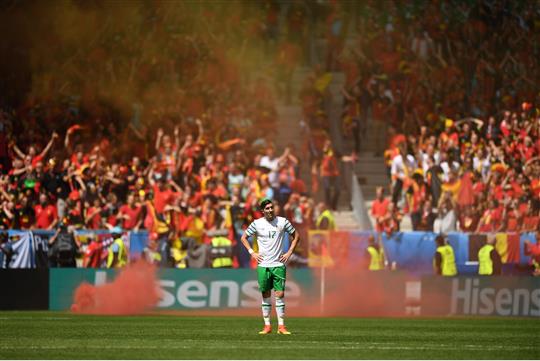 One group tuned out of the game, and returned to gabbing happily with their clique. They didn't give the impression that the loss would affect their sleep. By and large, they didn't bother looking at the screen for the last twenty minutes. Only the oohing and aahing of those who were still watching caused them to glance up at the telly occasionally. "This isn't like the rugby", observed one girl.

Another group, wound up and irate, roared abuse at the screen whenever the camera zoomed in on one of the popular scapegoats, in the tone of a Joe Duffy caller berating a politician for the shortfall in vital services.

The cameraman facilitated this subsection of the crowd by giving us a closeup of James McCarthy, towel on head after he was substituted. Duly prompted, one man nearby choose that moment to give a pithy assessment of McCarthy's career so far.

"Never in your life did you do anything for Ireland or Everton," he said, addressing McCarthy personally from his perch in Dublin 1. It was generous of him to think of Everton's grievances at a time when Ireland were so preoccupied with their own concerns.

The third group gazed at the screen dolefully, eyes glazed, like they were surveying the wreckage of a horrible accident. Still and uncommunicative.

One group, notable by its absence, were those determined to let the world know they were still enjoying themselves in spite of the scoreline. It turns out that this resilient community is largely confined to the stadium itself.

There was perhaps one exception.

In the urinal, with fifteen minutes remaining in the game, one lad blasted out the Fields of Athenry as he pissed. What heart and defiance.

The referee became a talking point, as he usually does when a team is losing. Unfortunately, Cuneyt Cakir abandoned his longstanding hostility to the sight of a high foot on a football pitch right at the moment when Thomas Vermaelen and Toby Alderweireld attempted to decapitate Shane Long. And so the man whose main claim to fame is sending a player off for a high foot challenge decided not to even halt play for treatment following an infinitely more dangerous example of the genre. Belgium scored their opener from the breakaway. 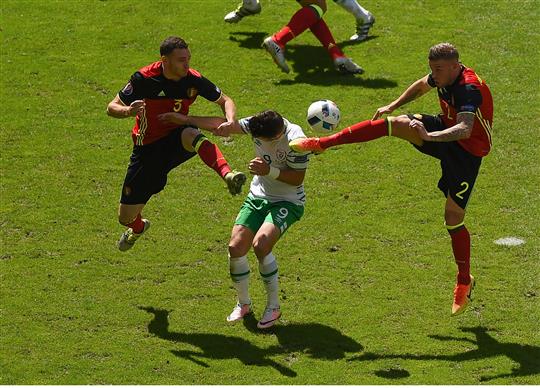 Cakir has always given off the kind of haughty and uncompromising air one might find in an Israeli soldier patrolling the Gaza Strip. He is a classic little Hitler. Or a 'miserable cunt', as the man beside me put it.

Still he wasn't instrumental in Ireland's loss today. Most of the heavy lifting in that regard was done by the Irish players themselves who, after a refreshing performance on Monday, reminded us again of their limitations.

The final whistle barely seemed to register in the pub.

While straining to hear the RTE autopsy over the pub chatter, a no-nonsense, remote control brandishing barman buzzed around switching each and every telly over to the rugby. Most of the pub remained disengaged, at least initially, from events in Johannesburg, their spirits still battered by what had gone down in Bordeaux.

As we were leaving, one man did utter the cheerful phrase, 'Ah, fuckit, we'll beat Italy. Be grand.'

Read more: Irish Player Ratings: How We Rated The Irish Players In A Gut-Wrenching Defeat To Belgium