The lights were on in the Aviva Stadium this evening as Georgia had a leg stretcher on the Landsdowne Road turf before tomorrow night's meeting with a Republic of Ireland side, who may well be under a little more pressure to perform in front of their home crowd than is usual.

Mick McCarthy's side laboured to a 1-0 win at minnows Gibraltar on Saturday evening in what was a display underscored by Ireland's lack of fluidity, chances and a worldie of a save by Darren Randolph to spare blushes.

After an awkward couple of days for the FAI in general, a convincing win tomorrow night would at least quieten some of the dissenting voices that were incredibly calling for McCarthy's head on Saturday.

Georgian manager Vladimir Weiss believes that the recent appointment of McCarthy will in itself be an obstacle for his team to overcome come Tuesday evening. 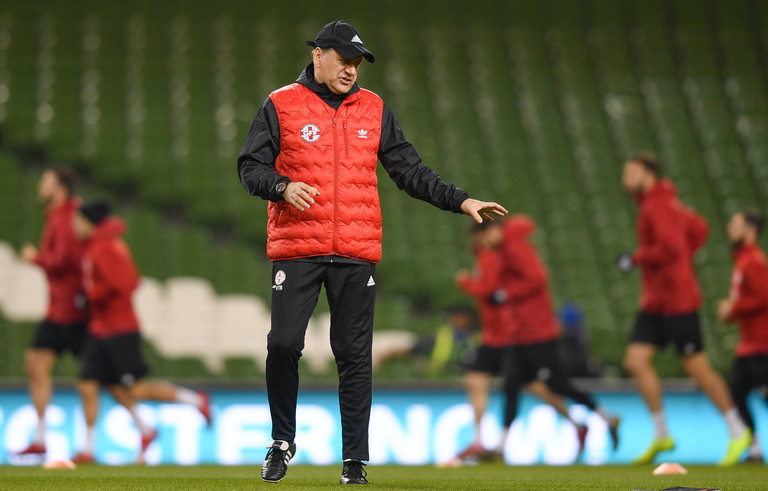 The Slovakian coach explained, that “A new coach every time brings something new to the team and new spirit", before bizarrely stating he didn't want to discuss McCarthy any further - for a reason we all quickly found out.

I won’t speak about it because Martin O’Neill was my good friend and he did an amazing job for the national team.

He’s a lovely, lovely guy. I love him so much and I wish him all the best at his club.

Well, there you go.

The Georgians, who are already guaranteed at least a playoff spot when the dust finally settles on Group D in November, by way of their performance in the UEFA Nations League, come into the game on the back of a defeat, albeit a plucky one, against the Swiss at the weekend.

And causing Ireland problems is something which has not been unfamiliar to the Eurasian side in recent seasons, despite never actually gaining a win over the Boys in Green.

It's a record that Weiss and his side will be aiming to alter.

Every game is not easy. In history, we lose or draw sometimes. But tomorrow, we will try to change this history and try to win because if we want to challenge in the group, we need some points from this game because we lost against the favourite in the group, Switzerland, at home.

We will see tomorrow if we can do it. We know how we can play, but we must show that on the pitch.

Sometimes in life, miracles happen, but tomorrow this game will show what our chances in the group will be for the next games.

With no significant injuries to any of his squad after the trip to the Med, McCarthy has been spared the headache of having players unavailable for selection. However, eyes will be on the Yorkshire man to see if there are any changes to personnel and perhaps more pressingly, team shape.

The Irish went with a very standard, very rigid and more-times-than-not very boring 4-4-2 out on the Rock and the question is would a change in shape allow for more creative players, much of the ilk of inform Preston midfielder Alan Judge, to start at the Aviva tomorrow night?

SEE ALSO: "It's A Charade!" Quinn Calls Out FAI Over Delaney Handling