Meyler Wore The Armband, But Several Leaders Stood Up To Be Counted In Cardiff

Our player ratings published in the moments after the final on whistle on Monday night told the story, across the board the players in white jerseys (New Balance must be absolutely chuffed by the way, an iconic moment already) put in a tremendous shift and showed enough quality to go into the heart of Welsh football and take their opportunity away from them.

I can't fault a single player for their performance last night, and by not mentioning them in detail here is not to suggest they did not influence the result, but there were a few things that stuck with me; moments in the game having watched it again, that I wanted to highlight in particular.

That was a great result. They team needed to weather the storm, make our presence felt and grab a foothold in the game, take our one chance when it falls to us, and then batten down the hatches. They did all of that about as well as we possibly could have.

The squad is going to change a good bit over the next two years, but the following players have shown they can be relied upon when the chips are down. 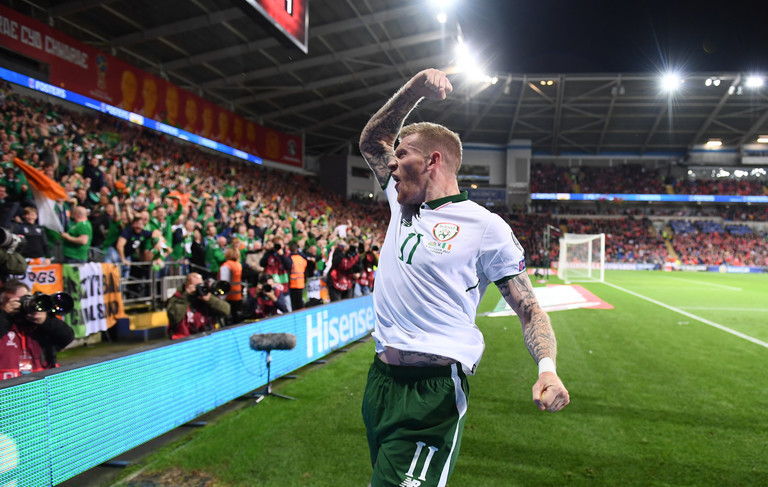 What else can really be said about James McClean at this stage?

Pounding the badge on his chest as he sprinted to the delirious Ireland fans - who the entire nation is still jealous of today - had McClean accidentally over-asserted himself and drawn blood, you can be damn sure it would have been green.

His goal came from instinctive positioning - the right place at the right time - and finishing without thinking. To connect as sweetly as he did, to deliver that audible 'THUMP' that can only be met by the roar of the crowd.. Something about the way he came into frame and approached the shot, I just knew it was going in. There's no better feeling as a football fan than the moment you know it's going in. That's why home fans mock away supporters for celebrating too early, because they were robbed of that feeling.

I had that feeling in Lille when Wes Hoolahan looked up and spotted Robbie Brady on the charge, and I had it again the second Harry Arter hopped over that ball like it was covered in shite. It's a truly beautiful thing.

That's another leadership moment. After Vienna, refusing to accept mediocrity away to Moldova and bagging a brace, and the fact that he would rather die than lose a 50/50 in general, he has been our best player over this qualification campaign and is someone that has been there for us when we need him most. 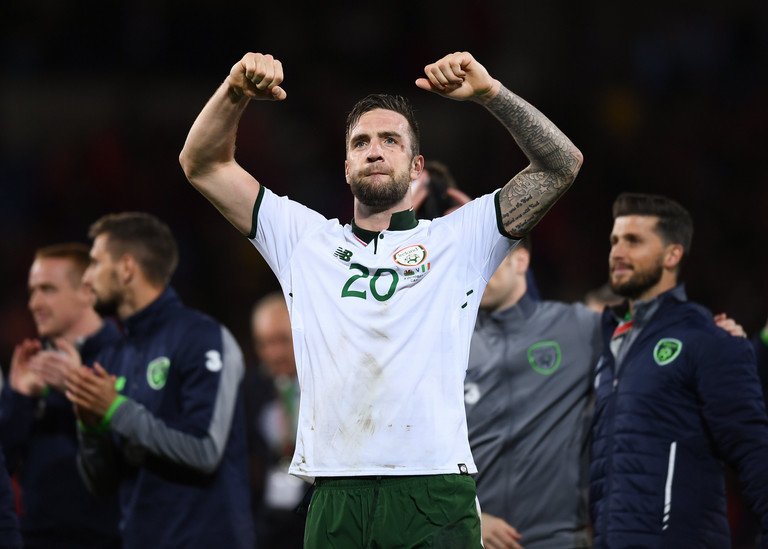 As we approached the playoff for Euro 2012 at the end of the last qualification campaign, the idea of Shane Duffy playing in the backline would have made most Irish fans feel uneasy. Fast forward to now, as we approach the playoff once again, Duffy is our best defender and one of our most influential players.

His leap is nothing short of incredible. We're lucky he's playing alongside Lewis Dunk at Brighton and not dunking in peoples' faces in the NBA, because he has athleticism that looks out of place at times on a football pitch. He jumps over aerial duels, and he can't be marked from set-pieces because his standing jump is higher than most with a run. He is arguably our biggest goal threat as a result.

He was thrown in at the deep-end somewhat at Euro 2016. After Belgium exposed our lack of mobility at the back, Duffy was called on and played out of his skin. He hasn't looked back since.

He had one bad brain-fart against Moldova earlier in the campaign, and is prone to the odd lapse in concentration, but he rises to the big occasion and is well worth the occasional scare for his total domination of the air. And he's getting better with every game. 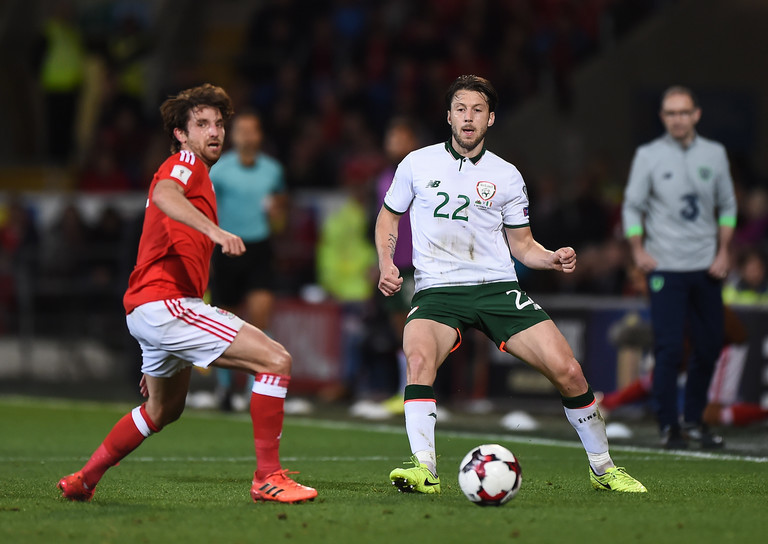 It is no surprise that Bournemouth's streetwise midfield nuisance has enjoyed his best games in an Ireland shirt away to Austria and away to Wales. Big games, backs against the wall for the most part, the kinds of games that require a certain personality to prosper in; a gritty determination.

He reminds me of an Irish Ander Herrera in the way that he absolutely infuriates opposition fans with mastery of the 'dark arts' while maintaining a stance of total innocence with the referee, and in the way he flies about the midfield hassling opponents for 90 minutes.

That said, he's a decent player too. His decision to leave that ball for someone else to hit shows a level of awareness we don't usually see in an Ireland jersey. How many other players would have blasted that in the general direction of the near post in the same situation?

He knew McClean was coming in behind, he took three defenders out of the game, and proved that he can deliver on the big occasion. Again. 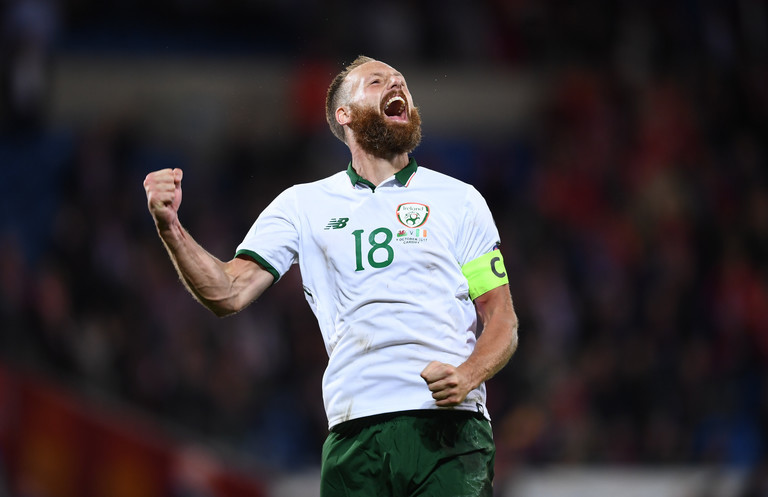 The armband suits him, it must be said. Another suggestion that would have raised eyebrows even a year ago, Meyler has gone from someone on the periphery of the team, hoping for sub appearances and friendlies, to being someone that has to be in the side.

How? By making the absolute most of every sub appearance and friendly match. He so desperately wants to play for Ireland that he doesn't allow himself a second of rest in a game. Look at him at any moment in a game, he's shouting at someone, pointing at someone, even when the ball is out of play he's barking orders.

Aside from a crazy decision at the very death of the game that will rule him out of the first leg of the playoff, Meyler was exactly what we needed in the middle of the pitch against Wales, and is a noticeable upgrade on Glenn Whelan due to his dynamism.

Also, taking time out to salute the true captain of this squad and call him your hero? That's a classy move right there. 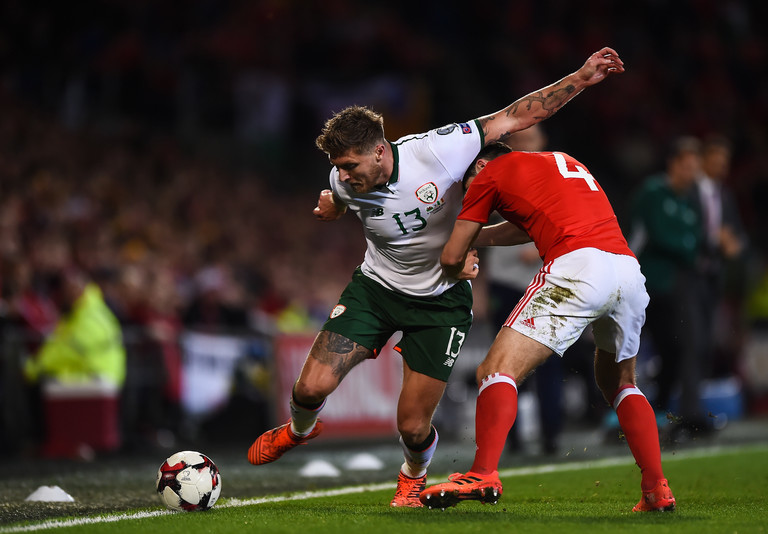 I have been critical of Jeff Hendrick over his last few games in an Ireland jersey, as he has been himself, but look at that photo above and what do you see?

A 'scruff of the neck' moment.

I stood up and shouted my appreciation for Hendrick closing down Ashley Williams initially, because it was what I was crying out for to give us a chance in the final third. His fancy footwork on the touchline - side note: fair play to the linesman for not bottling it in front of the Wales fans - and subsequent cross was enough quality to win us the game.

That alone justifies his selection in the team. We don't have many players who can come up with that moment, in fact I counted three on the pitch last night in McClean, Brady, and Hendrick, so we badly need them to provide at least one or two sparks of creativity in each game or we are resigned to set-pieces. McClean applied the finish, Arter played a huge role, but Hendrick made that goal thanks to determination and, most importantly, quality.

If he can continue to do it, he will be the player we all know he can be. 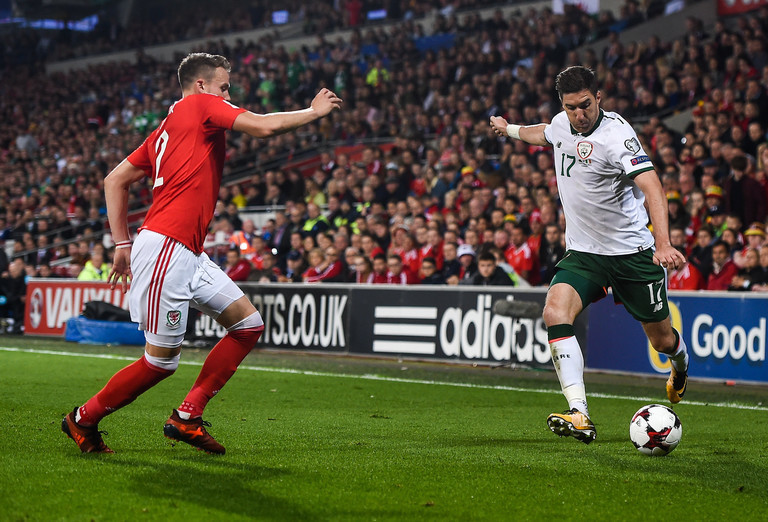 Thankfully we are long past the point of Stephen Ward being an underrated member of the Ireland squad. Dunphy had his revelation last night; that Robbie Brady should not be played at left-back because we have an extremely reliable Premier League quality player occupying that position, but the rest of us clued in some time ago.

Defensively he is extremely reliable and when he attacks, he does so with purpose. Keep it simple, but make it effective.

For a good while I looked at Stephen Ward and knew there was potential but he looked like he didn't believe he belonged where he was. Since working with Sean Dyche his confidence is through the roof and it's allowing him to perform as well as he has been for club and country in recent times. The next campaign will possibly be his last, but he will be a hugely important player once again.

Wardinho is the 4th highest scoring defender in Fantasy Premier League this season too, by the way. 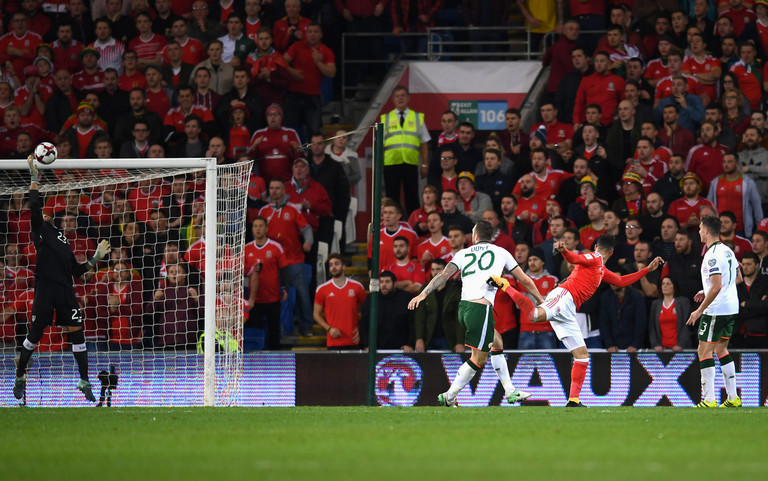 Having been comfortably our best choice since he replaced Shay Given on that unforgettable night against Germany, Randolph has held a remarkable level of consistency after stepping into regular international football like it's no big deal.

He is now making terrific athletic saves to preserve his clean sheets on a regular basis, and never gives the opposition a hint that he might give them an easy opportunity. He also does this one thing all the time; when Ireland are under heavy pressure, he'll get a hold of the ball from a save or catch and just lie down on it for a bit, maybe breathe a visible sigh of relief. It's become a really reassuring sight.

In international football, not everybody can say they don't have to worry about the goalkeeper. We can for the next two or three campaigns at least.

A great performance, a great result. Not only mission accomplished in terms of reaching the playoffs, but also a sign that we can go out and qualify for Euro 2020 with confidence.

Oh, and Ciaran Clark pulled off a pretty tasty roulette at the edge of the Welsh box in the first half, I'm not letting that go without acknowledgment.

Football
2 hours ago
By Mark Farrelly
Beat The 5:15 - Get At Least 4/7 In Our Irish Sports Trivia Quiz
1