Was Giovanni Trapattoni A Good Ireland Manager? - The Pros And Cons

In Italy, he remains a revered figure, synonymous with the great Juventus side of the 1980s. It becomes necessary to dwell on the numbers here. As a manager, he has won seven Serie A titles, to go with his two as a player. He guided Juventus to six Scudettos between 1977 and 1986 and then led Inter Milan to their first championship in over 20 years back in 1989. In total, he has won 10 League titles in four different countries.

The record books inform us he is one of only two managers in history to win the European Cup, the Cup Winners' Cup, and the UEFA Cup. The abolition of the Cup Winners Cup means that he and the late Udo Laddek will hold onto that distinction for eternity.

Not even his grossly underwhelming exploits with the Italian national team in the early noughties diminished his standing for too long.

Indeed, when Ireland played Italy in Bari in 2009, Trap's successor Marcello Lippi, the manager who won the 2006 World Cup, was barracked by the home crowd, while Trap was warmly received. This was chiefly down to Lippi's hostility towards local boy Antonio Cassano, a player who Trap had always selected. 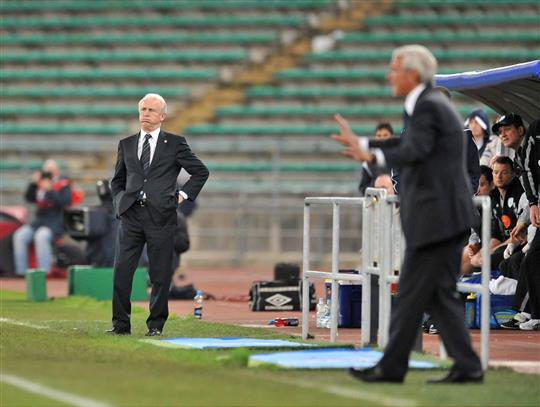 As far as Ireland goes, Trap resides in an odd space in terms of historical assessment. Opinion is sharply divided between those who straightforwardly insist he did his job by qualifying Ireland for Euro 2012 and those who carp about the style of play and lament the performance in the tournament itself.

Let us then examine the pros and cons from the Trapattoni era, the good times and the bad. Most of the former fell between the years 2008-11, while the latter began to properly accumulate during the dog days of his reign, from the summer of 2012 onwards.

Eamon Dunphy, you might remember, was giddy with excitement when Trap's name was first floated. On RTE, he gleefully juxtaposed Trapattoni's managerial trophy haul with the rather paltry collection amassed by previous favourite Terry Venables, a candidate whom Dunphy had worked tooth and nail to discredit. Dunphy said the appointment of Trapattoni would be the "greatest thing to to happen the game in this country in my time."

Eamo told Richard Keys and Andy Gray on TalkSport that when he first met Trap, he told him "Hello, Mr. Trapattoni, you won't know me but I want to welcome you to Ireland." Trapattoni apparently responded by saying, "I know you! Man from telly. Very bad!!!" Dunphy concluded that Liam Brady must have given him the lowdown.

Inevitably, the early vote of confidence wouldn't survive the first few competitive games. Ireland's 1-0 win over Cyrpus in Croke Park in the third qualifying match of the 2010 campaign formally brought down the curtain on the honeymoon period. Dunphy and Giles lambasted the style of play adopted that night. This would be constant complaint for the remainder of Trap's time with Ireland. 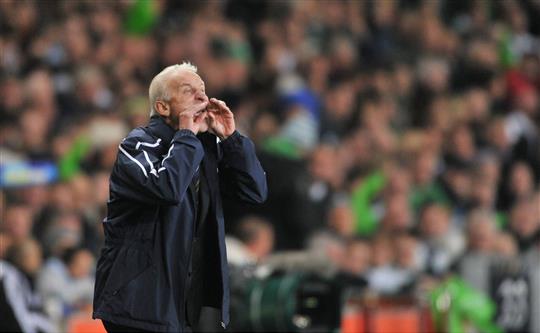 It's usually forgotten that Ireland had played far better football in the opening two games of that campaign, a period which coincided with the rare fitness of Stephen Reid. For Trap, Reid was capable of playing constructively without sacrificing defensive solidity. Reid's absence seemed to push Trap into a more defensive posture.

Arguably, Ireland's most impressive campaign under Trapattoni was the first qualifying adventure for the 2010 World Cup. Had they been blessed to meet dummies like Estonia in the playoff, they'd have assuredly qualified for that competition as well as Euro 2012.

It's often ignored by Trap's critics that not only had Ireland not qualified for a tournament since 2002, they hadn't even reached a playoff. Ireland finished 3rd in their qualifying group for Euro 2004. They slumped to 4th (albeit rather unluckily in an odd group) during the 2006 World Cup campaign. And they finished a very distant 3rd in the qualifying campaign for Euro 2008, playing out three dead rubbers at the end.

Trap sorted that immediately. Our chief rivals in the group were Italy and Bulgaria with international newbies Montenegro - the booby prize among sixth seeded teams - pegged as the dark-horses.

With Italy the front-runners, Ireland easily saw off Bulgaria in the battle for the playoff spot. Ireland disposed of the lesser opposition while drawing wherever possible.

Trapattoni settled on a deeply conservative approach with two defensive-minded midfielders protecting the back four. In attack, we relied on the ingenuity of the wingers as well as Robbie Keane and, usually, Kevin Doyle up front. Keane seemed to enjoy the responsibility heaped on his shoulders. He scored a mightily impressive 28 goals in 50 matches under Trapattoni's tenure. Trap was utterly aghast when anyone suggested that Keane should be dropped. He was adamant that no one else could be relied upon to score so many goals.

The country groaned when we drew France in the 2010 playoff. On closer inspection, France were in disarray and their manager was an oddball who remained bizarrely well got within the country's footballing hierarchy. After a demoralising 1-0 loss in Croker, Ireland produced a performance for the ages in Paris.

Ireland won 1-0 over ninety minutes, with Robbie again the scorer. The circumstances of their exit don't need to be rehashed but Trap handled it with a dignity which wasn't as strongly in evidence within the FAI itself. He didn't make a spectacle of himself. 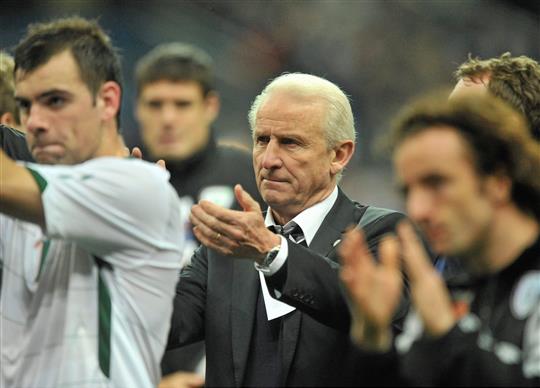 As far as crediting Trap for Ireland's display in Paris, there was a sharp difference between the native press and the international coverage.

Those abroad praised Trapattoni for generating such an exceptional performance from Ireland. The Italian press praised him as a magician.

Alex Ferguson said "Well, my thoughts were with Trapattoni I must admit. He's prepared that team and it's absolutely magnificent performance by them. You couldn't ask for better from a coach. And it's taken away from him..."

In the Guardian, Amy Lawrence said that it was tempting to see France-Ireland as a "duel between a skilled team with a duff coach and a mundane team with an ingenious coach. Ireland's performance was so special that it was impossible not to reflect on the wonders that one of the masters of coaching in the modern age pulled out of his hat."

The views of many at home were rather more sour. One would want to be wary of accepting the RTE panel's take as an accurate barometer of public opinion but, on this issue, they appeared to enjoy considerable support.

Far from crediting the coach, they argued Ireland's strong display in Paris was an indictment of Trap's approach more generally. The manager's obsessive conservatism was preventing the team from playing like this more often. They wondered aloud whether the players had taken the lead in the dressing room that night.

Ireland hardly improved from the 2010 campaign and the evidence from the games against Russia suggests they got slightly worse. But in November 2011, Ireland secured qualification to their first major tournament in a decade.

Ireland finished runners-up in their group once again, behind the Russians but ahead of rivals Armenia and Slovakia. Ireland's most important victory in the group was the 1-0 away win in Armenia, a result which was greeted with a shrug and a sigh at the time but which, predictably, was later re-cast as vital once all our rivals began shipping points there.

Qualification was assured after the 4-0 away win over Estonia in the first leg of the playoff. Trapattoni appeared to grow quite teary in his post-match interview with Dave Kelly.

One of the forgotten achievements of the Trapattoni reign occurred in the middle of 2011. Between the 3-0 win over Wales in Dublin on May 24th and the 2-0 victory over Andorra on October 7th, Ireland managed eight clean sheets in a row. Only four of the games were competitive (unless one classes the Carling Nations Cup as "competitive", which few did).

Ireland's display in Euro 2012 served only to parade our deficiencies to a wider audience.

Liam Brady and co sometimes appear to argue that Trapattoni had accomplished his mission as soon as the Irish team stepped on the plane to Poland. But some even might suggest we might have better preserved our dignity had we avoided the tournament altogether. 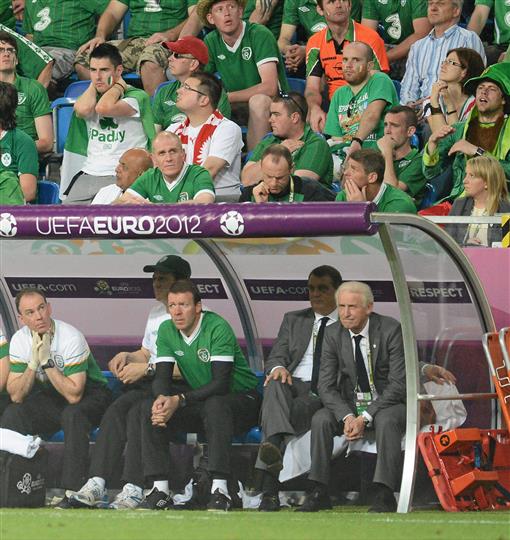 The consensus on the Guardian Football podcast was that 'Ireland 2012' may well have been the worst team ever to play in a European championships, though the Bulgaria team of 2004 would surely have something to say about that.

In retrospect, it would have been better had Trap departed there and then. Even the most headless of optimists would have concluded that Trapattoni limping on for another campaign was a straightforward waste of two years.

So it proved. Any goodwill accrued in his early years had been torpedoed by the misery of Poland.

In modern times at least, Irish football has never known a flatter campaign than the quest to qualify for the 2014 World Cup. The Euro 2008 campaign under Steve Staunton's leadership may have been more harrowing but the rising levels of fan anger indicated there was a greater degree of interest. For the 2014 campaign, apathy reigned supreme.

A few heretics implied that Trap's impressive CV didn't necessarily mean he was all that. During Euro 2012, Ken Early wondered aloud whether Trap, as a manager, mightn't be ill-suited to tournament football. Early suggested that he might be better suited to managing a brilliant club team with more money than every other team in the League. This resembled Zdenek Zeman's comments about Fabio Capello - "even my dead grandmother could win with the teams he has." 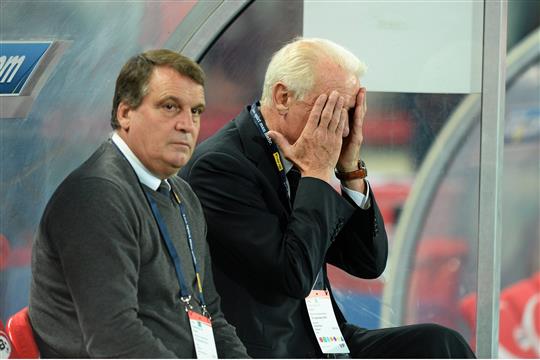 The 6-1 defeat to Germany in October 2012 was the lowest moment, and might have ended his tenure there and then. A 4-1 win over the Faroe Islands calmed the speculation. Fans were resigned to Trap seeing out the campaign. There was a glimmer of hope in early 2013 as Ireland achieved a decent 0-0 draw in Stockholm.

His selection decisions grew ever more perverse and baffling to people. Ireland's slight hopes of reaching the World Cup in Brazil were killed off by a 2-1 loss to Sweden. A few days later, Ireland headed to Vienna to fulfill their fixture with Austria. In many pubs and hotels of the country, those out barely turned their heads towards the television. Ireland were beaten 1-0, a result which condemned to 4th place in the group. The following day, Trap resigned.

In Ireland, there was widespread relief. The outside world concluded that Trap had worked miracles to get Ireland to Euro 2012 and he was eventually let down by shite players. "Suckers for a reputation", replied our native iconoclasts.

Football
10 months ago
By Gary Connaughton
On His Birthday, Here's The Best Giovanni Trapattoni Snaps From His Time With Ireland
Football
1 year ago
By Balls Team
Quiz: Name These Obscure Ireland Players From Trapattoni's Era
Football
2 years ago
By Arthur James O'Dea
Richard Dunne Urges Martin O'Neill To Follow Trapattoni's Example
Previous Next