Is Frank Lampard starting to feel the pressure? Having been the golden boy of the British media last season, the Chelsea manager has found praise a bit tougher to come by during this campaign.

There is no mystery as to why. Having spent a huge amount of money during the most recent transfer window, Lampard has failed to integrate many of the star recruits into his team. The likes of Kai Havertz, Timo Werner, and Hakim Ziyech look like shadows of the players they were at their former clubs.

They have all found themselves out of the team in recent weeks, with results also deteriorating at a rapid pace. While Lampard continues to put this down to each player's personal responsibility, questions must be asked of an inexperienced manager who has shown that he struggles to get the best out of his most talented squad members.

Chelsea have been credited with an interest in a number of different managers in recent times, with The Athletic reporting that they are keen to recruit a German speaking manager to get the best out of Werner and Havertz.

Considering recent results, you could understand why such reports would be surfacing at the moment.

That isn't to say Lampard is taking any of this lying down. Speaking in a press conference ahead of Chelsea's FA Cup tie against Luton Town, he launched a strange attack on The Athletic's Liam Twomey for some of the articles he has written about their recent form.

All of this came after a fairly innocuous question about the impact of Petr Cech's presence around the first team squad.

To be fair Liam, I think their confidence would be shot if they were to read some of the pieces that you write at the minute.

I read some of them and some of the confirmation bias that you reflect on games with is almost like a social media pundit to try and get a reaction in a negative way. I read the pieces when we were doing well as well and they didn't go both ways.

I think for a journalist to be objective would be a big start because if players do real it I'd fell like that.

In terms if Petr, I feel his experience is vital. It's vital for the club that we use our experiences. Even in the years that we were successful and look back at us holding trophies, there were tough moments in them to whatever degree.

We had some really solid squads in those years as well. We've been there before and knows what it takes to turn the corner, so we work together on that.

Perhaps Lampard feels that he been fairly untreated during his team's recent disastrous run, but to suggest that he received little praise during positive spells is completely disingenuous.

He got some incredibly over-the-top praise for Chelsea's achievements last season. In fact, it was so ridiculous that we were prompted to write an article on the subject.

Some of the things he was praised for included holding a team meeting after being appointed and telling his players to score goals. That is without even mentioning his groundbreaking move in setting up a WhatsApp group for his coaching staff.

Lampard set up a WhatsApp group for his coaching staff to remain in constant contact. The chat is thought to be very busy, especially after a defeat. [The Athletic] #CFC

Things have now balanced out a bit, with Lampard clearly unable to handle any sort of criticism. If results continue on their current trajectory, he might not have to endure it for too much longer.

SEE ALSO: Is Frank Lampard In Danger Of Doing A Steve Staunton To His Chelsea Legacy? 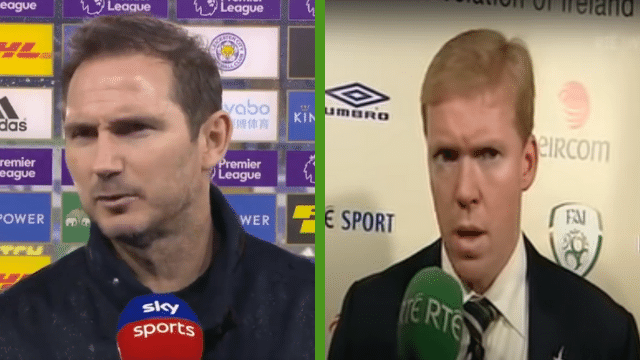