Ireland went in at the break drawing 1-1 with Uruguay after Jon Walters opened the scoring with a peach of a strike from outside the box in the 28th minute.

Walters' glory was quickly quelled when Darren Randolph failed to claim a long ball which resulted in a rogue Jose Giminez header looping into the net.

Ireland responded well and just before half time Robbie Brady looked to have gifted Jon Walters with his second of the night when he knocked a first time volley across the six yard box into the big man's path, giving him simplest of tap-ins from three yards out.

Another look at that miss by Jon Walters! 🙈🙈🙈 #COYBIG pic.twitter.com/7VWMr3zAnE

Unbelievably, Walters managed to hit the bar before throwing his hands onto his head in disbelief.

David Maher of Sportsfile was on hand to capture the moment beautifully, you can see the horror on big Jon's face from the second the ball leaves his foot. 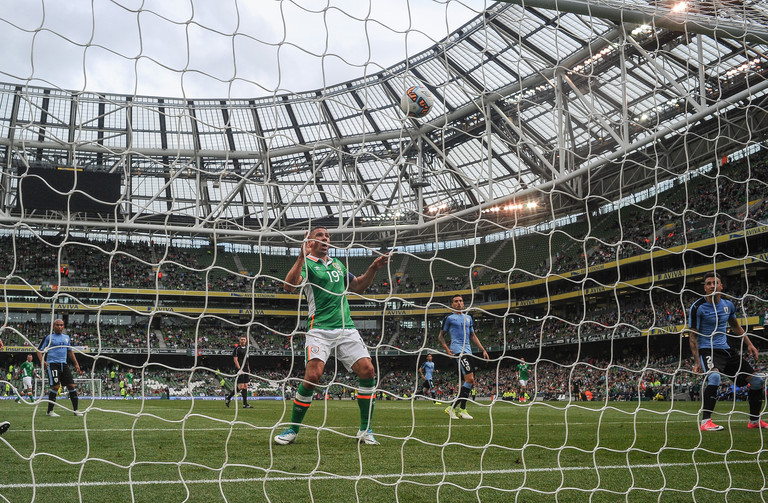 Richard Dunne at half time described the chance as "too easy" while nobody on Twitter can quite get their heads around how Ireland didn't take a 2-1 lead.

Walters will be hitting the bar for other reasons later if that miss proves decisive.

One brilliant finish from Jon Walters - one awful miss from him, sums up first half v Uruguay, 1-1 #COYBIG

That's it Jon, get it out of your system now before the Austrians call over.