While the wounds of that 5-1 defeat to Denmark at the Aviva on November 14 are still raw, the Ireland football team gathers again tonight to start the long journey towards Euro 2020.

It feels like the start of a new era for the Ireland team. Loyal soldiers like Wes Hoolahan and Daryl Murphy have retired. Stalwarts like Jon Walters, Robbie Brady and Ciaran Clark are injured. For the exciting generation of Ireland players currently lighting up the Championship, the time is now. This is their chance to prove they belong in the green jersey.

Ahead of the friendly in Turkey this week, we got wondering: just what is Ireland's best XI from the original 40-man squad picked by Martin O'Neill? Rather than guess ourselves, we decided to get the verdict from the players themselves.

So this week, we traveled to Deepdale to meet two of the Preston North End Irish contingent - goal-machine Seani Maguire and Daryl Horgan - to get them to play each other in FIFA 18 with the Ireland XI they would send out against Turkey. The winning team might just tell us a lot about Ireland's best team at the moment. 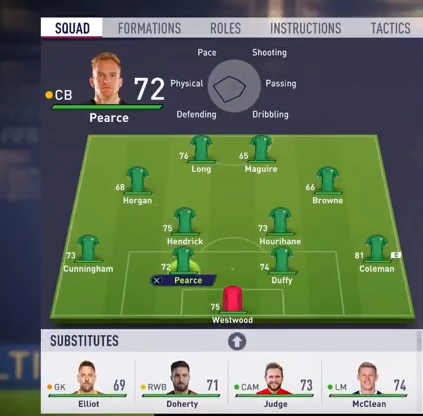 Seani’s Ireland XI is a traditional 4-4-2 that’s full of speed, guile and marauding adventure. He’s picking players on form, which might explain him backing himself to start alongside Shane Long in a pacy, if diminutive forward pairing.

Interestingly, he also starts Horgan to prowl the left wing while using James McClean (and his 74 player rating) as an impact sub. There are four Preston players in the starting XI, with Alan Browne (currently in scintillating form) starting out on the right with Galway’s Greg Cunningham in at left back. Shane Duffy and Derby’s Alex Pearce anchor the defense while Seamus Coleman returns to his natural place as Ireland right back.

Seani doesn’t seem too bothered with reputation, with 8 of his XI employed by Championship sides. 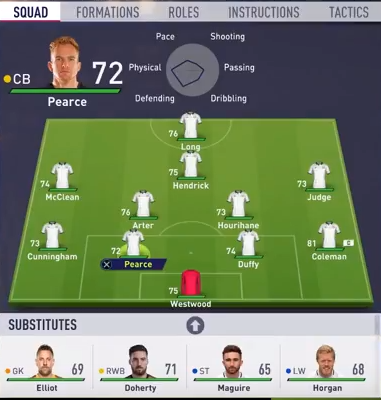 Daryl tells us that he picked a team who could hold the ball and maintain possession and his Ireland XI has a gritty streak running through it. He chose to leave both himself and his FIFA 18 playing mate on the bench for this match. Instead, he selected Shane Long to start on his own in front of a bruising midfield with James McClean and Harry Arter very prominent.

Interestingly, Horgan throws Brentford’s Alan Judge into the midfield to provide a bit of creative spark.

Daryl also chose the same defense and goalkeeper as Seani, which suggests that with Ciaran Clark out injured, Ireland’s back four picks itself at the moment.

So which Ireland would prevail?

Firstly, it’s worth noting, as Seani reveals in this video, that Daryl Horgan is not the world’s greatest FIFA player. At halftime, it looked as if Maguire was heading for a comfortable romp, with a goal from Maguire setting the tone. You'd have to say Maguire was cocky about his chances against the former Dundalk man. Otherwise he might not have had his likeness attempt to chip the keeper after finding himself one-on-one with Keiren Westwood.

But the match took an unexpected twist late on as two very late goals from Jeff Hendrick swung the match in Horgan’s favour. Perhaps the physicality of Horgan’s midfield tired out the opposition. It was obvious just how gutted Maguire was by the defeat in his post-match interview.

The result certainly gives Martin O’Neill pause for thought ahead of the Turkey friendly. To judge by this game of FIFA 18, an Ireland team that is possession-obsessed and full of creative, tough-minded midfielders could have the most success against Turkey. It’s not a million miles away from the football philosophy that the RTE panel have been crying out for for decades.

A new chapter begins Friday night. We hope that Martin O'Neill takes an example from the two Preston boys and gives the likes of Hourihane, Browne, Judge, Cunnigham and yes Maguire and Horgan a chance to make the green jersey their own.