We Are Privileged To Have Seamus Coleman As Ireland Captain

Ireland begin their campaign to reach the 2022 World Cup tonight in Belgrade. No doubt about it, these are bad times for Ireland supporters. The injury list is extensive. The form guide reads as brutal as any Russian novel. We head into qualifying more in hope than expectation, but whatever slivers of hope we have are genuine. The fundamental decency of Ireland's best players, namely its captain, is clear for all to see. It must have a galvanising effect for the entire squad.

Ireland captain Seamus Coleman is 32-years-old. This will most certainly be his last chance to reach a World Cup for Ireland. It could even be his last campaign in an Ireland shirt. Coleman is a beloved character amongst Irish supporters but it is possible his leadership and playing abilities have been undervalued or taken for granted over his career. Regardless, at a time of transition for the Ireland team, Coleman has this week proven why he's such an exceptional captain.

Coleman does the little things and the big things. Take this brief chat with Gavin Bazunu in a Manchester hotel lobby as the squad assembled. Right away, you can see him making the 19-year-old at ease.

"You are flying, aren't you," Coleman said. Bazunu nods. It's nice to get a complement.

Yesterday the Ireland captain spoke to the media. He made two fascinating contributions. One, he responded to the report he was 'humiliated' to be trotted out for a presser with Stephen Kenny last year knowing he wouldn't be in the starting team. He immediately put that falsehood to bed.

There's absolutely no ego involved with me and there never has been. Then to read that I was disappointed to be asked to go to a press conference when the manager had the decency to say that, 'You don't have to do the press conference if you don't want to. I know it might be disappointing because you're not playing. So, if you don't want to do it, you don't have to. If you want to do it, that's fine'.

"My duty as captain is to be positive around the place whether I play or don't play. I went to that press conference with absolutely no issues whatsoever. It was disappointing to read something like that about myself when I've got a character in the game that plenty of managers would back.

It's interesting to see Coleman use the word 'duty' when he speaks of the captaincy. He clearly understands his responsibilities to the squad as a whole, and that they supercede his own personal reactions are to not being selected. Coleman was also asked about Shane Duffy's form. Coleman could not have been more inspiring in backing the Derryman as he copes with the loss of his father.

"This lad would do anything for his club or his country. He doesn't sulk. He's a great character around the place. He had a tough time, and he jumped on a plane back to work, maybe quicker than most people would.

Whatever about results on a football pitch, it's amazing as an Ireland fan to know the man who captains the country's international side possesses these levels of decency and empathy.

It looks certain that Coleman will play his first Ireland game in 18 months tonight. You'd imagine he'll be a calming and inspiring presence in the Ireland defense.. His powers as a footballer may have waned over the years, but Coleman's genius as a leader is shining right now. His name in the starting team sheet should be enough to get Ireland players and supporters believing again.

SEE ALSO: Kenny Must Learn From History And Give Youth The Freedom It Needs 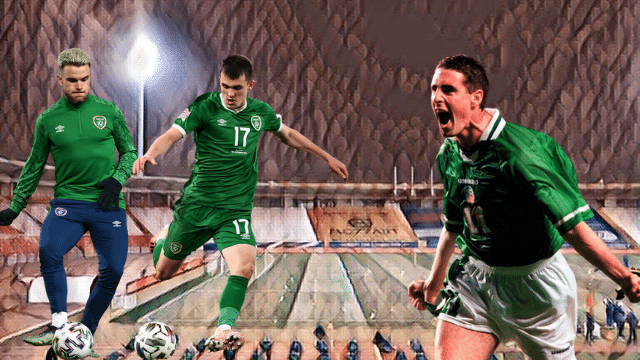