We Can't Keep Blaming Managers. We Have Much Bigger Problems

Yes, we should obviously be beating Luxembourg. Stephen Kenny has serious questions to answer to the Irish fans after no win in ten games, and three goals, and a home defeat to a minnow of European football. It wasn't good enough and Kenny will know that. Tactically, he was outmaneuvered by a manager with inferior players at his disposable. But there was a time when no matter what way Ireland played, we'd have had enough to beat Luxembourg. The group of players currently available to Stephen Kenny are unfortunately not in a position to overcome poor tactics and organisation.

Our collective obsession with the success and failure of the Irish team being down to one man and one man only causes us to continue to overlook the fundamental problems in Irish football.

Hands up, we've been big fans of Stephen Kenny's appointment. We believed and continue to believe that transforming the Irish senior team's entire outlook on the game will be of benefit in the long run and is long past due. We remain hopeful that Kenny is the man to achieve this, and if he isn't, that we need a positive, progressive coach to replace him rather than reverting to type. But for good and bad, the senior manager can only do so much.

We've been certainly guilty in negativity towards Giovanni Trapattoni, Martin O'Neill, and Mick McCarthy. There were legitimate concerns with all three managers, and legitimate criticism. Chief among them from this writer was their constant belittling of their players' abilities. A predisposed notion that Ireland just weren't good enough resulted in a generation of teams who were routinely outplayed by inferior teams like Georgia while scraping results.

However, they weren't acting like this for no reason. For generations now, the standard of player available to the Irish manager has been declining dramatically.

When the Premier League was formed at the height of the Jack Charlton era, 27 Irish players appeared in the first season of the competition. That's broadly comparable to our representation now, but a deeper look reveals they are very different kinds of Premier League players.

In that first season, the 27 Irish players made 663 appearances, 12 players played over 30 games, four were team captains, and players represented champions Manchester United, second place Aston Villa, Liverpool, Arsenal, Manchester City, Chelsea, and many more. Paul McGrath was PFA Player of the Year. Roy Keane was nominated for Young Player of the Year. Keane and McGrath also made the PFA Team of the Year. 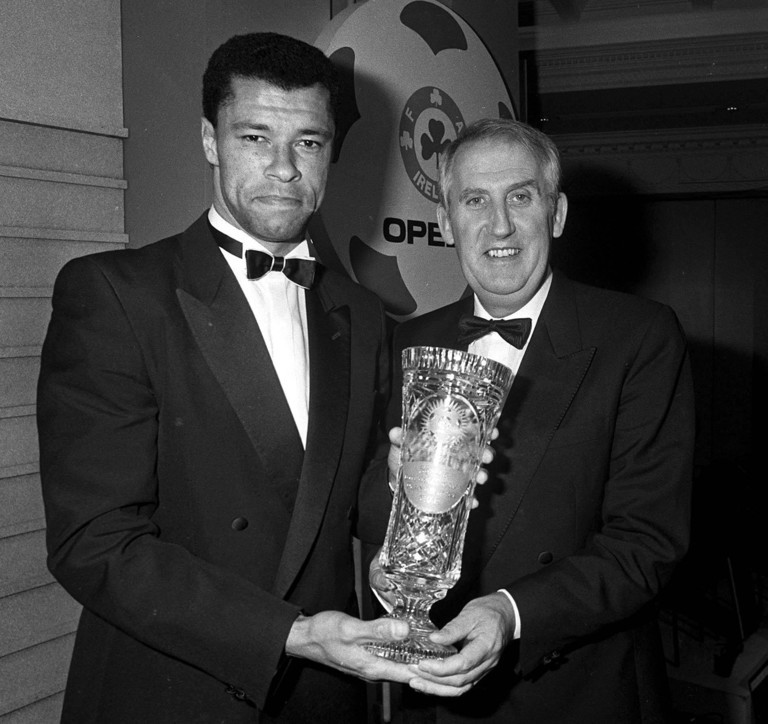 Ten years later, with Brian Kerr in charge of Ireland in what we thought was a sticky period in Irish football after the glory of the 2002 World Cup, the Irish presence in the Premier League had dramatically increased, but the influence of those players was very slowly waning. An incredible 35 Irish players played in the Premier League in the 2002/03 season, but now with just nine playing 30 games or more, and clocking in with 693 appearances. Roy Keane was the title winning captain, and John O'Shea was his teammate. Shay Given and Andy O'Brien were regulars for third place Newcastle, but the majority of Irish starters were further down the league. There were three Irish club captains. John O'Shea finished third in the voting for PFA Young Player of the Year, while Stephen Carr was included in the PFA Team of the Year.

Another ten years on, Ireland were on the back of a disastrous Euro 2012 and in the midst of an even worst World Cup qualifying campaign. And the situation with Irish players in the Premier League had also taken a massive hit. And yet, 29 players still made the grade that season, playing in 575 games. Again, the influence of the players on the Premier League had significantly dropped though. Everton, who boasted regular starting places for Seamus Coleman, James McCarthy, and Darron Gibson, finished sixth in the table. The majority of Irish players finished way down the league, but among them, the likes of Jonathan Walters, Shane Long, Wes Hoolahan, Damien Duff, and Glenn Whelan were among the key players for their respective teams. 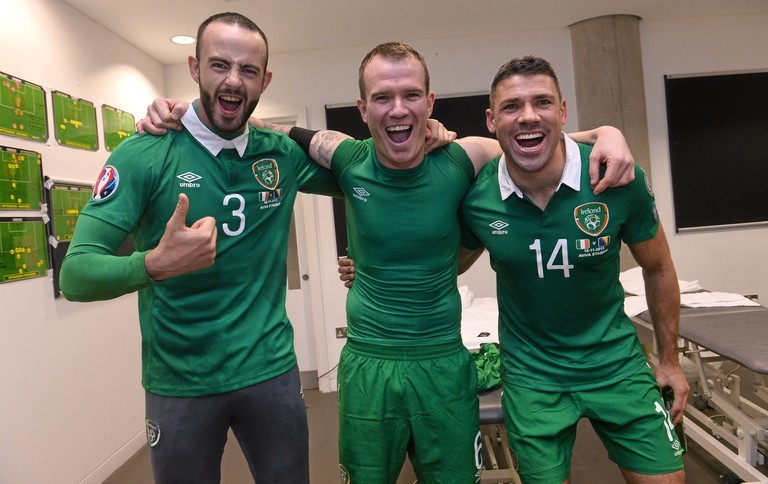 Which brings us to now, and the standard of player Stephen Kenny has to choose from. With the majority of the Premier League season played, a somewhat sustainable 21 players have appeared so far. This is actually an increase on previous years. However, a look into the stats paints a very different story. With games to go, obviously, Irish players have only appeared in just 259 games. By far the most have been the 26 games played from David McGoldrick, who has retired from international football. Likewise, there are appearances from Shane Long and Conor Hourihane who were moved on to the Championship in the January transfer window.

Of those players available to Stephen Kenny from the Premier League, only John Egan and Seamus Coleman would be considered crucial cogs to their team's success, while Enda Stevens is a guaranteed starter for Sheffield United when fit. Dara O'Shea's impressive first season in the Premier League with West Brom has him increasing in influence at The Hawthorns, but he is not a guaranteed starter.  Some other players we would have hoped to make a leap this year in one way or another - Callum Robinson, Jeff Hendrick, Aaron Connolly, Matt Doherty, Michael Obafemi, James McCarthy - have all struggled for form and/or with injuries, and slipped down their respective squads' pecking order.

In truth, Irish players have never had less of an impact on the English top flight. There is finally a healthy look beyond England that's slowly becoming part of the culture, as Josh Cullen and Jack Byrne have shown in recent months, but it's still true that the measuring stuck for a top class Irish player will be making it in the Premier League.

Interestingly, when you compare the amount of Irish players in comparison to Scotland and Wales, Ireland still have more Premier League players. But it goes to show how vague a term "Premier League players" really is, when that is true in an era that Scotland have players in the first team at Liverpool, Manchester United, and Arsenal, and Welsh players star for Manchester United and Tottenham. Outside of Matt Doherty this season, the last Irish players to get regular game time for a "Big 6" team were John O'Shea, Shay Given and Robbie Keane, who left Manchester United, Manchester City and Spurs respectively in 2011.

Stephen Kenny can't fix that. Neither could McCarthy or O'Neill. Decades of neglect and poor management from those at the top the game's governing body was always going to have more consequences than a few months of a scandal and a good book. Finally now, the FAI's chickens are coming home to roost.

A nation that is entirely reliant on other countries to develop their footballers can only get away with it for so long. As Premier League academies becomes bigger and a lot more sophisticated, scouting networks reach far wider than they previously did. Bringing players across the Irish Sea doesn't offer these clubs the best chance of success anymore. Brexit will only make things worse. And yet, very little has been done to find an alternative path. We await the long term benefits of Ruud Dokter's player development and the fruits of the underage National League, but remain, like Brian Kerr, skeptical.

In the meantime, a group of English Championship and fringe Premier League players will represent their country as best they can. They should be beating Luxembourg but can't compete against the likes of Portugal.

What a manager can do is organise. A discipline, team spirit, and distinctive style of play can go a long way in international football, as Luxembourg showed on Saturday night, as Iceland have shown in recent years, as Northern Ireland have. But without a fundamental change in how Ireland develops its footballers, it's only going to go so far. Sack Kenny, don't sack Kenny, it's not going to make any real difference at the end of the day.

SEE ALSO:  Jason Knight Says It's Time For Young Players To 'Step Up' For Ireland 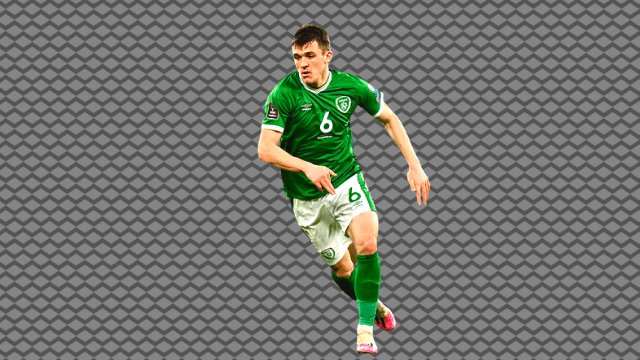 Football
3 months ago
By Donny Mahoney
'Do The FAI Take Us For Morons?': Remembering The Week Steve Staunton Became The Gaffer
Football
3 months ago
By Donny Mahoney
After The Fall Of John Delaney: An Interview With Mark Tighe
Football
5 months ago
By Gary Connaughton
RTÉ To Air In-Depth Documentary Exploring Rise And Fall Of John Delaney
Popular on Balls
Rugby
8 hours ago
By PJ Browne
Ronan O'Gara Promoted To Top Job At La Rochelle
Rugby
1 day ago
By PJ Browne
Connacht Pull Off 'Real Coup' By Signing Irish-Qualified Aussie
Snooker
7 hours ago
By PJ Browne
Mark Williams Not Happy With Calls To Ban Controversial Shot