The trick of every great TV show, they tell us, is an ability to tell the entire plot in the pilot, or even in a single line. The Wire is heralded here as the prime example:

Perhaps that's why the Irish public have become attached to The Panel: a trio of football analysts who seemed to speak to a larger truth when cry-arseing about Irish football games.

Sometimes, us Irish are eternally crippled by a weirdly low self-esteem, constantly comparing ourselves unfavourably to others.

It's why we really quite like the attention when British people tweet about hurling, and why we're worried that, should we ask Apple for the €13 billion they owe us, they might up sticks and leave for the other highly-educated, highly-skilled, English-speaking nation in the EU. (By the time this would happen, of course, there won't be one).

We're wedded to a fatalistic - and entirely incorrect - notion that we're little old Ireland, always finding new and enterprising ways of messing up, and that no matter what we do, there's someone out there doing it better than we are.

And Eamon Dunphy after an Irish match seems to speak to this. For Eamo finds new ways of perceiving distinctly the limits of the Irish football team after every game; that somewhere else, there's just someone out there doing it better.

His digs at Glenn Whelan and his pleas for Wes are shot through with a kind of poetic eloquence, that all Eamo wants is a better Ireland, knowing deep-down it's something he'll never see.

Post-Georgia on Thursday, this hit its most absurd level yet, as Dunphy claimed that Ireland could learn a thing or two from Stephen Kenny's Dundalk. Not that Dundalk aren't fantastic, but that Dunphy would be so blatant in his saying words for words' sake, given that he has, in the past, called the League of Ireland a "chicken league".

Last night, however, the unfamiliar winds of change blew across Montrose. The Panel were fully disassembled for an Irish qualifier for the first time. Daragh was joined by Duffer, Didi and Richie.

Those expecting the hysteria that matched John Giles' dropping for the Scotland game in the last campaign, however, were disappointed.

Here's the thing: it was grand.

For the first time, there was much more hysteria on twitter than on television over an Irish performance. Everything The Panel 2.0 did was calm, measured, thoughtful and incisive.

Duff took the thoughtful, hunched-forward role of Giles, with Sadlier looking far more comfortable slouching at the end than the straight-backed chair he was given against Georgia: 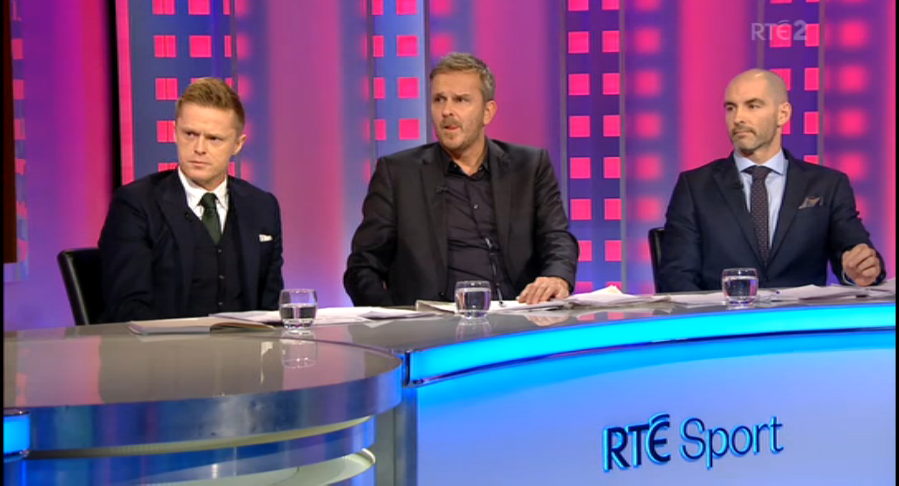 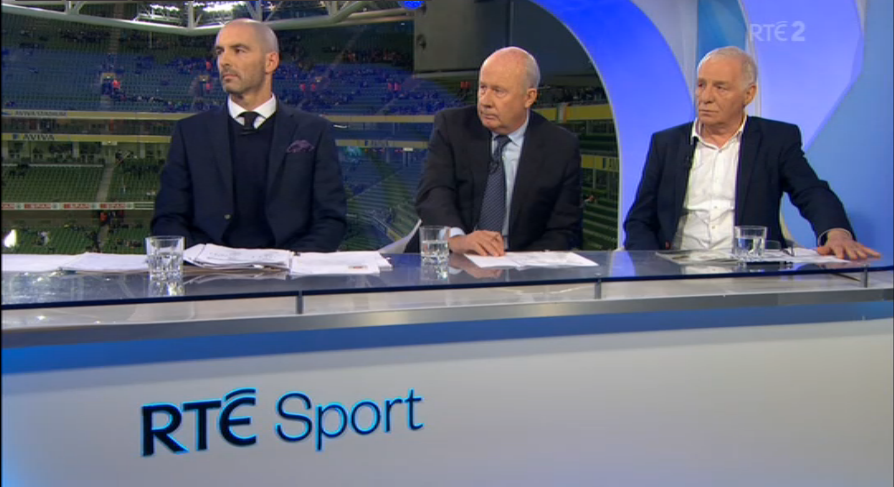 The inevitable Wes Hoolahan debate was handled extremely well, stripped of the Eamon Frenzy. Sadlier said that it should no longer be a debate, that Hoolahan should always be in the Irish team. Didi disagreed, citing the fact that Wes is 34.

Most interesting, however, was the discussion surrounding Wes' treatment by Martin O'Neill. Duff pointed to the fact that O'Neill rarely praises Wes in interviews:

It's always a prickly point. If he's ever mentioned in interviews with Martin O'Neill, he's never too eager to pay him a compliment which I find amazing. Each to their own.

Sadlier was strong on this also, utilising his vocal version of an iron fist in a velvet glove:

If you go back to Thursday night's game, it screaming out for someone who does what he does. Forget about whether he starts or not, why he wouldn't have been brought in on an occasion like that... Tony asked him [Martin O'Neill] a direct question and he got nowhere with him.

I don't know why Martin O'Neill thinks the way he does or uses him so sparingly. What he thinks of him I don't think we'll ever fully be told.

Duff was great on James McClean too, speaking with genuine delight for the Irish winger, someone he has had his eye on as he came into the squad to take his place. Duff also made a knowing nod to the fact that McClean has had about as many twitter accounts as he has international goals.

There was even some positivity on full-time. Ireland had just scraped through against vastly inferior opposition, and here was Didi Hamann saying that he felt we'd breeze into the World Cup based on our performances thus far.

What is this sorcery!? Where's the doomsday?

Last night's panel may have missed the anarchy of the original ensemble, but it felt had the kind of freshness that is often conspicuous in its absence on RTE.

The Panel were an Irish TV phenomenon, but with Giles now gone, and with every viewer knowing that it's being phased out, it feels dated.

Social media has, of course, fed into this. Once distinctive, the panel now resembles a group simply shouting louder than the legions of the disaffected online.

Dunphy will always remain one of the most deeply interesting men in Irish football.

But sometimes, he's right that there's someone out there, doing it better.

To Hull And Back

Steve Bruce's time out of work looks like it's done him the world of good. Here he is, looking good on Goals on Sunday, or as the fine Liverpool journalist Simon Hughes calls it, Mistakes That Lead To Goals on Sunday. 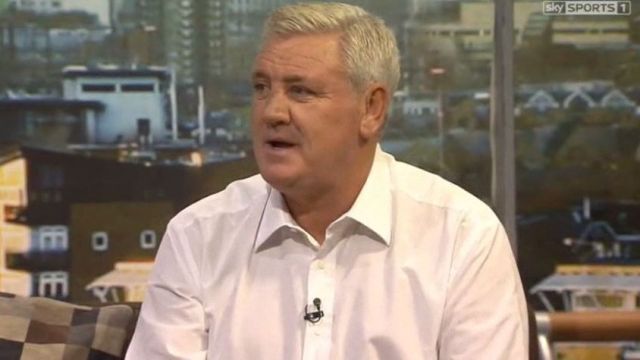 Leinster beat Munster at the weekend: the first stage of rugby's slow creep toward the back pages once more. After the game, Jamie Heaslip called a Leinster huddle, to which only the players were invited.

A Sky Sports cameraman tried to nudge in on the chat, before being told where to go by Heaslip. We're not entirely sure who booted him out of the way:

In an odd twist, however, we did find out the identity of the cameraman. His name is David Roberts, brother of Wales and Lions beefcake Jamie.

Hey @jamieheaslip my brother wants to know who kicked him out the huddle earlier!? He's distraught 😂@davidroberts22 https://t.co/lyL8wgERiM

If you would like to defend the honour of Eamon Dunphy, have any idea who kicked the Sky cameraman away, are Didi Hamann or would like to tell this column what to watch next, tweet @gcooney93.

See Also: TG4's GAA Coverage Is An Amazing Achievement, And It's Time It Got The Respect It Deserves