We'll have a more rounded travel guide ready when the draw is made and we actually know where Ireland are going to be based, but this is the perfect start. If you thought Poland was turned green back in 2012 then just imagine France next year.

The recession is over, it's only a couple of hours away on a place and we're ready to reclaim our title as the best fans in the world. Hopefully the team will give us something to cheer this time around but you better believe the travelling fans are going to make it special one way or another.

And if you're in the mood to start your planning before the draw has even been made, then take a look at this and let the wanderlust start to flow.

You have to think Paris is the obvious base. Sure France is a big country, but if you get to Paris then you can get anywhere else in the country. Now, you want to make sure you get the best prices so you'll have to start booking now. Obviously enough that means you won't know what dates. We've thought of that.

Just go for the entire tournament. Even better, go for a few days before and a few days after to make sure you don't miss out on any of the atmosphere. The tournament kicks off on June 10th and finishes on July 10th so a flight out on the 6th and a return on the 14th would be just about perfect. Here's your itinerary. 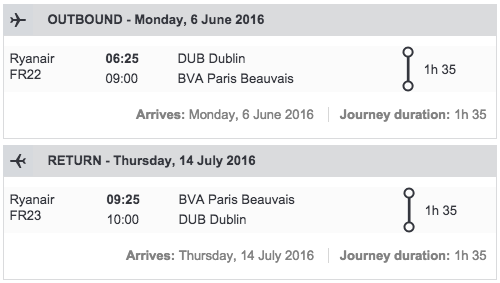 And what's the price for this ideal travel arrangement? A measly €72. Unbelievable stuff.

Go on ahead there and book it. We're not even looking for commission.

Now we know you're going to say we're completely ignoring the fact that that kind of trip would need a hell of a lot of spending money considering you'll be on holiday in France for over a month.

You're dead right, we are completely ignoring it.

But this is no time for rational decisions or simple economics. We're going to the Euros. Book those flights and think about the consequences later. Who cares about accommodation? Who cares about travel between cities? Once you're there that'll sort itself out. The important thing is we're going to the Euros and you can experience that for the price of a train trip from Cork to Dublin.

Football
2 years ago
By Conor Neville
'Without A Shadow Of A Doubt' The Most Hostile Atmosphere The Irish Team Have Ever Faced...
Previous Next

Football
2 weeks ago
By Balls Team
The Irish Players' WhatsApp Group From The 2002 World Cup Has Been Found
Football
2 months ago
By Sean Meehan
Quiz: Name Each Member Of Ireland's Major Tournament Squads
Football
2 years ago
By Conor Neville
'Without A Shadow Of A Doubt' The Most Hostile Atmosphere The Irish Team Have Ever Faced...
Popular on Balls
Football
10 hours ago
By Gary Connaughton
Report: Barcelona Have Rejected €100M Offer For 17-Year Old Ansu Fati
12

The Rewind
13 hours ago
By Mark Farrelly
Quiz: Name These 20 Peripheral Friends Characters