David McGoldrick, next summer is alive thanks to you.

Following Ireland's late match heroics in two matches against Denmark and Switzerland, Ireland still have a chance to qualify for EURO 2020. With the top two spots in the group guaranteeing a place at the Euros, the margin for error is slim.

With 11 points from five matches, Ireland find themselves at the top of Group D. However, if Denmark and Switzerland get the full complement of points from their games in-hand, all three teams will be on 11 points. 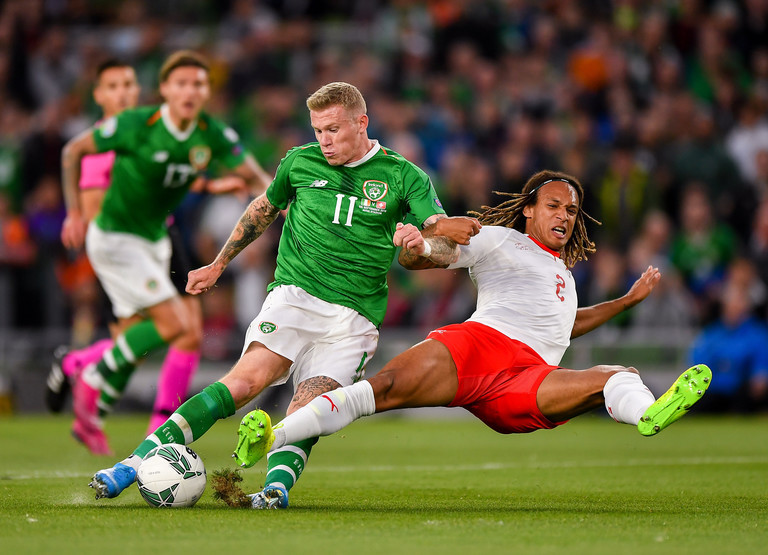 Now, the easiest course of action would be for Mick McCarthy's men to win their final three matches, topping the group at a canter. However, with our only three wins coming against Georgia and Gibraltar, we sincerely doubt that nine points from nine is a reasonable expectation.

Georgia away represents the best chance for Ireland to gain three points. Even at that, going to Tblisi is a daunting task. Our past two qualifying campaigns have seen us struggle away to Georgia. Only a late Aiden McGeady goal got us a win in EURO 2016 qualifying, whereas we could only manage a 1-1 in World Cup qualifying.

The Georgians also welcome the Danes to Tbilisi on Sunday. Should Georgia take points from Denmark, it makes Ireland's task a whole lot easier.

Now, that's not to say that getting results from Denmark at home and Switzerland away is easy. But Ireland have showcased that they're not overawed when playing against both sides. A draw against both sides, kickstarted by a victory against Georgia, would leave Ireland on 16 points.

Should Georgia fail to take points against either Denmark or Switzerland, the crux of Ireland's qualification chances stand with their head-to-head matches against either country.

Denmark and Switzerland have already played out a 3-3 draw in Basel. October 12 will be an important date in how this group goes. The result of Switzerland and Denmark will give Group D some shape going into the final three matchdays. Ireland take on Georgia earlier that day.

A loss for either side would see them fall behind in the three-way game of catch-up, meaning they would need to beat Ireland in order to qualify automatically. That result would mean that if Ireland manage to get those five points from their final three matches, qualification is all but guaranteed.

Ireland have remained unbeaten through five matches in the qualification group. Our fate fully in the hands of Mick McCarthy's charges. Should Ireland remain unbeaten throughout the campaign, we'll put ourselves in a great position to qualify for the finals.

Now, if Georgia could do us a favour...