Guest writer James Fenton explains the magnitude of Ireland's victory over Italy as perceived by a generation of football fans to whom Stuttgart and Packie Bonner's penalty heroics remain fairytales. On June 22nd, 2016, Irish fans of a certain age experienced their own Italia '90.

FOR a split second on that Wednesday night, something incredible happened in the northern French City of Lille which sparked a chain reaction across the world. A spherical object hung in mid-air while an army of green soldiers mere yards away leapt to their feet. Their actions were mimicked all around the Stade Pierre-Mauroy and reverberated to the gatherings of their comrades in Paris, Bordeaux and various other cities across France.

The action spread north-west across the channel towards the pubs and streets of London. Clapham, Walthamstow, Islington all taking deep breaths in anticipation of the emotional release that was about to befall them. It spread all the way up to the Irish communities of Birmingham and Manchester, Edinburgh and Glasgow. It reached its pinnacle across the Irish Sea as living rooms and pub floors across Dublin fell victim to spilled cups of tea and pints of beer. It reached Baldoyle, a coastal village on the northside of the Irish capital where a mother was suddenly being thrown into the reality of a moment her son had always dreamed of. A moment of pride unfathomable to most of us.

It spread throughout Leinster and across the Central Plain, down towards Munster, and Roy Keane's hometown of Mayfield in county Cork and up north towards Kilrea in Derry - the birthplace of Martin O'Neill.

It travelled west across the Atlantic Ocean to the late afternoon of the Irish communities in New York and Boston, those perhaps taking half days from work, before reaching the lunching expats of California and Vancouver.

Simultaneously, it spread east across Europe, to the early hours in Asia, towards the the Green Armies of Dubai, Abu Dhabi, Seoul and Tokyo before arriving at the breakfast tables of recession-hit emigrants in Melbourne and Brisbane, Sydney and Wellington.

The world stopped for one moment as Irish eyes, of first, second, third, fourth generations and beyond remained transfixed on television screens throughout the globe.

Then back. Back to Lille. The moment that was encapsulating millions reached a crescendo as this spherical object bounced on a patch of grass just in front of a white line separating despair from elation, hopelessness from unimaginable ecstasy.

And then it crossed that line. And bounced into the net which seperated it from the disbelieving eyewitnesses who were beginning to give up all hope. 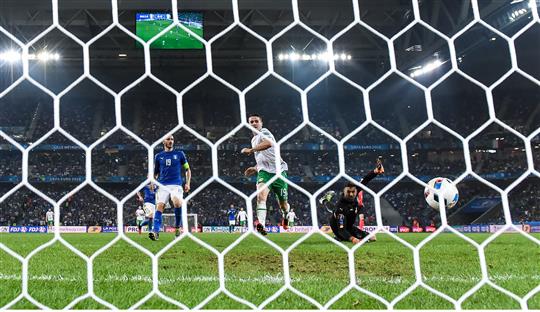 24-year-old Robbie Brady landed on his feet after having headed that ball into the goal and he wheeled away, running behind the goal, towards the army, his face etched in an expression of primitive joy which was soon replaced by one of disbelief and tears.

Tears of joy. Tears which were a culmination of the hard work that had got him this far. Hard work that brought him from playing with St. Kevin's Boys in Dublin as a child with his now international team-mate Jeff Hendrick. Hard work that saw Alex Ferguson bring him to Old Trafford before placing him on the scrapheap of countless failed Manchester United players before him. Hard work that brought him back to the Premier League with Hull City and Norwich City and now to Lille, where the venue erupts, grown men and women jumping into the arms of strangers, grabbing the faces of people they have never met and staring into each other's bulging eyes with the same passion they would greet someone whom they have shared a lifetime relationship.

All the while screaming whatever it was their lungs could muster. Their Ireland. Their Robbie Brady.

Brady slides on his knees in front of the green masses before being jumped upon by his delirious Ireland team-mates. His header from 34-year-old Wes Hoolahan's cross had downed the Italians and entered the history books as the Irish diaspora placed their hands on their heads all around the world in a futile attempt to comprehend what they've just seen. Most will recognise the feeling from before. 1988, 1990, 1994 and 2002 all provided similar moments of unadulterated joy but not like this. Not so late in the game. Not when all hope was fading. This wasn't a the lottery of a penalty shoot-out. This was the culmination of 83 minutes of picking the lock that was the Italian defence and finally breaking the door down with a performance of mental strength, aggression and above all teamwork. A band of brothers working together in an attempt to provide millions with a new story to tell. New heroes.

People like those of Brady's age, for whom Euro 88, Italia 90 and USA 94 are mere fairytales relayed to them by parents and older siblings. People who are now spread across the world, affected by a recession which was reminiscent of those dark 80s days.

People of Hoolahan's age who watched those remarkable days in Stuttgart, Genoa and New Jersey as children are now raising children of their own, both in Ireland and away from the homeland. Watching their own offspring witnessing their own history in the making. Their own Italia '90.

Teenagers (bloody TEENAGERS) who were mere twinkles in their parents' eyes when Robbie Keane cartwheeled away after saving a point against the Germans in Japan back in 2002. 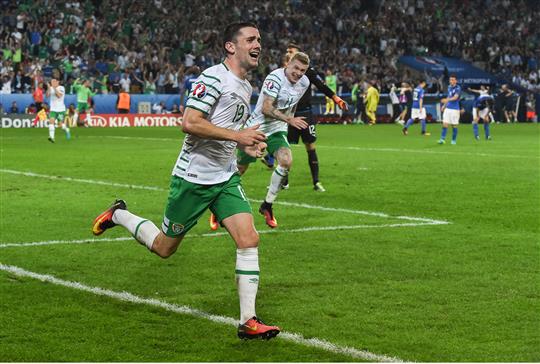 All across France and Ireland, all across Europe and continents far away, chairs are knocked over, kisses are exchanged and tears are shed. But then they had to wait. Wait almost another 10 agonising minutes as their heroes had to see it through.

Then the final whistle. Back to Baldoyle and a family who have just seen their lives change forever. A mother surely still not comprehending the elation that one of her sons has just spread around the world. The same mother watching another son in the stadium in France becoming a social media sensation before her eyes. A boy crying incessant tears of pride for his brother while also unconsciously crying the tears of a nation. A boy with a front row seat to watch his brother taking on Europe's best. A momentous family occasion. Little did he know how it would end up and how his brother's moment would change people's lives.

While the tears were being shed and the cameras still rolling, Robbie Brady spoke of his difficulty at comprehending what he had just done. You and the rest of us, son. 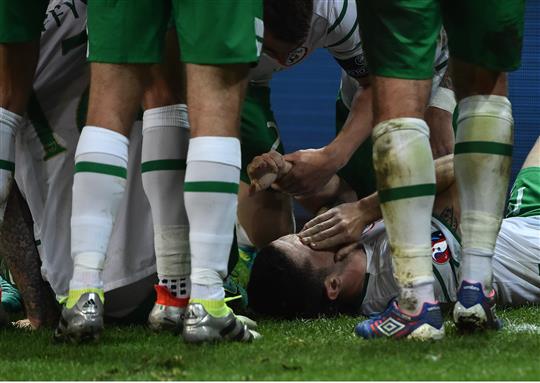 Thanks to James Fenton for sending this into us.