Explainer: Who Could Ireland Play In The Euro 2020 Playoffs?

A 1-1 draw in Dublin ensures Ireland must try to qualify for the 2020 European Championships through the play-offs. Switzerland and Denmark take the automatic qualification spots in Group D.

Next up Mick McCarthy's side will play a one-off semi-final match in March, 2020 and then a one-off final should they win. That final would be against the other semi-final playoff winners from League B.

The semi-final is set for March 26th with the highest-ranking team at home. The final follows on March 31st. 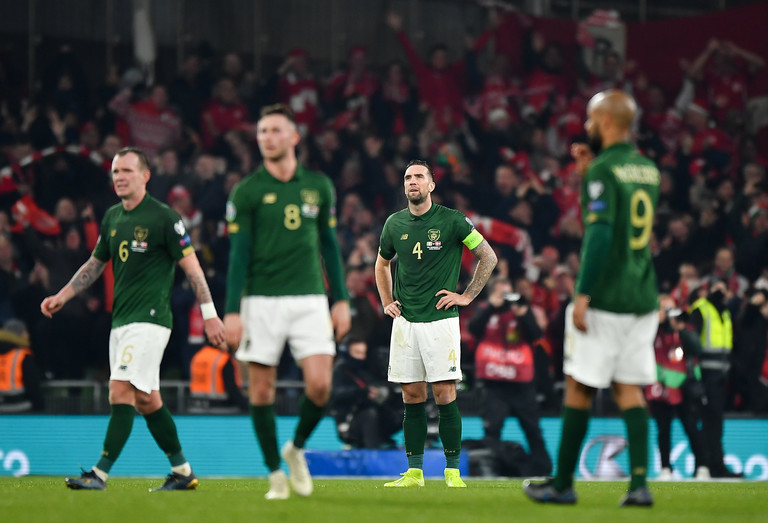 Who could Ireland play in the Euro 2020 playoffs?

They won't know until Tuesday but right now, Ireland could play Bosnia, Wales, Slovakia. They could meet Northern Ireland in a final. The majority of attention will be focused on Wales and Hungary in Group E on Tuesday at 7.45 pm. If Wales draw and Slovakia qualify with an expected win over Azerbaijan then it will be Wales against Ireland.

If Wales win, they qualify. That would see Ireland face Slovakia away.

If Hungary win, it gets complicated. One of Wales, Slovakia and Northern Ireland would be required to fill the vacant spot for the League A playoff. Ireland cannot do so as they are a host nation.

Essentially, we will have to wait until Friday’s playoff draw to find out Ireland's fate. That would likely see Ireland play one of Wales, Slovakia or Bosnia away.

Ireland cannot play Northern Ireland in a semi-final as they are both the lowest-ranked sides.

When do the Euro 2020 playoff draws occur?

The draw takes place Friday, November 22nd in Nyon at 11am Irish time.

Should the Boys in Green qualify, they will two groups games in Dublin but let's not get ahead of ourselves. The first task is finding out who Ireland will play in the Euro 2020 playoffs. We will know for definite come Friday.

SEE ALSO: 'That Is The Difference' - Critical Walters Points At Key Mistake As Ireland Fall Short