Liverpool's Caoimhin Kelleher made his long-awaited Ireland debut this evening, replacing Gavin Bazunu at half-time of the 0-0 draw against Hungary in Budapest.

The 22-year-old from Cork had been expected to start and, despite being left out from the get-go, was given plenty of time to leave an impression - and that he did.

Kelleher was not given too much to deal with in terms of shots, but dealt with anything that came his way with aplomb, doing especially well to make two saves in a matter of seconds late on.

The most notable aspect of his performance was how smooth he was on the ball, and Kelleher's distribution was outlined Galway United's first team coach Lisa Fallon was on punditry duty for RTÉ. Fallon argued that the speed with which Kelleher distributes the ball gives him a distinct advantage over Bazunu.

One of the other areas I think is his distribution. Gavin Bazunu tends to take a bit of time on the ball. When he puts it down, he just takes time, he slows up the game – whereas Caoimhin can get the ball in, he’s rolling it out, he’s looking straight away: where’s the space, who’s on? And he gets the ball out and releases players nice and quickly.

They’re the little differences and that’s an area that might appeal to Stephen Kenny.

Former Irish international Kevin Doyle was also on pundit duty for RTE, and also was glowing in his praise for Kelleher.

Very similar goalkeepers [Bazunu and Kelleher]. If you look at Gav in the first half and against Andorra, very calm, very cool and collected. And you think, you know, four games in a row, he’s nailing down his position. And then Caoimhin comes on at half-time and all of a sudden you’re looking at him going, “no, he’s our number one!”

He’s a few years older than Gavin, maybe a bit more experienced, you know, training with the Liverpool first-team every day, playing a couple of Champions League games this season. His saves got better and better as the game went on.

He just looked really assured on the ball. Made things look easy.

He just looks like nothing is going to faze him. We did the game with Liverpool in the Champions League when he was playing and we were worried about him – his first start, a Champions League game. With his first touch, I think, he chops someone and just strolls it out. Calm, collected. He looks like he’s been number one for Ireland for a long time, and I imagine he will be.

Off that 45 minutes, he might just have pipped Gavin - or certainly put himself in contention for September's games.

Irish manager Stephen Kenny praised the performances of both keepers in the aftermath of the game. In his post-match interview with RTÉ, he also noted that the presence young Bournemouth goalkeeper Mark Travers leaves him with a pleasant selection headache ahead of September's World Cup qualifiers.

Our goalkeepers both had to play well.

Mark Travers also has been brilliant in training this week. So, the three young keepers, it's great to have them. You know, they've all got great futures. Hopefully they can go and play and get playing regularly next season.

Obviously, I know all about Caoimhin, I've had him now for the last couple of years. Injury during the year obviously halted him making his debut up until now. Gavin has jumped the queue and, for one so one, he's just immense. We're delighted with our three goalkeepers. We're really pleased with them.

"The players are proud to play for Ireland and we want the Irish supporters to be proud of the team. We have a journey to go to get there." - Stephen Kenny reflects on what's been a positive week for the Republic of Ireland #RTEsoccer pic.twitter.com/hlHBtC3Neq

The race for the Ireland goalkeeper jersey is set to heat up in the coming months, with Darren Randolph also not in any way out of the running. It does appear though that Caoimhin Kelleher has done plenty to impress the man in charge - and many others - with his performance in Budapest. 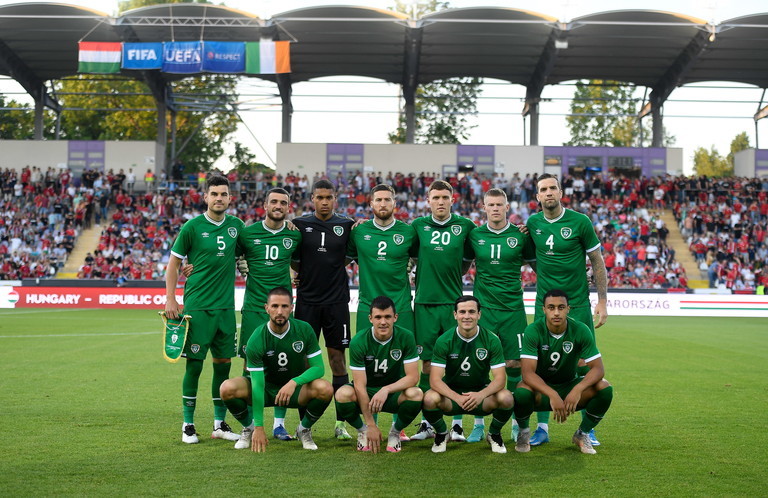 Football
2 hours ago
By Gary Connaughton
Jurgen Klopp Sums Up Just How Far Caoimhín Kelleher Has Come At Liverpool
Football
16 hours ago
By Jonathan Byrne
Watch: Caoimhín Kelleher Pulls Off Wonder Save In Liverpool Cup Win
Football
6 days ago
By Gary Connaughton
Supple Feels Mark Travers Can't Be Overlooked In Ireland No 1 Race
Popular on Balls
Golf
1 day ago
By PJ Browne
Shane Lowry And Rory McIlroy Delighted For Seamus Power
GAA
1 day ago
By PJ Browne
'It Was Crazy, We Were Still Hurling With St Kieran's College At The Time'
Football
22 hours ago
By Jonathan Byrne
Remembering Jimmy Bullard's Timid Big Dunc Stare Down From 2006
Football
1 day ago
By Jonathan Browne
Scott Brown Really Enjoyed Playing Against Rangers Last Night