Why Do Irish People Get So Annoyed When English Sportsmen Refer To Ireland As 'The Éire'?

In the build up to the match billed as the most pointless friendly of all time last June - Ireland v England in Dublin - Off The Ball interviewed Peter Shilton, a veteran of the era when the two teams seemed to meet every fortnight.

Unwittingly, Shilts - not a scintillating or original analyst in any sense - managed to raise the hackles of his listeners. And he did so remarkably early on.

'Obviously the game against 'Éire', I didn't think we played very well at all', he observed in the first ten seconds.

'We weren't probably as bad as the results looked but we didn't actually produce it when it mattered and I think if we had of got a t'riffic result against Éire in the first game then obviously like any tournament you get the momentum going...'

'Obviously Big Jack was the manager of Éire...'

'Of course, Big Jack was playing the long ball football as well, which paid off for Éire...'

Towards the end of the interview he did begin deploying the word 'Ireland' but finished up with this failed attempt to placate his audience.

Obviously, they're always great games and even though it's a friendly, I'm sure England and Eire will be a great game in the next week or so.

The texts flew in from people irked by Shilton's use of the phrase of 'The Eire'. Why does it provoke such irritation?

@offtheball Did Peter Shilton really refer to the Republic of Ireland as Éire? #redcard

The word 'Eire' is stamped on our coins and passports, so why does hearing it aloud in an English accent cause one to cringe?

It was especially upsetting to see ex-Ireland players referring to us as the same. Rory Delap's twitter bio boasts of his being an 'ex-pro footballer for Eire, Carlisle, Derby, Southampton, Sunderland, Stoke, Barnsley and Burton'. 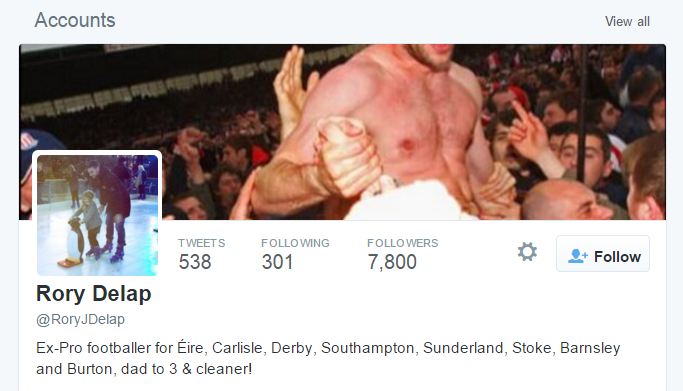 When drawing up the Constitution, Dev, an old time Gaelic Leaguer, favoured 'Éire' as the official name of the State for both the English and Irish texts. An amendment was moved by Frank MacDermot of the Centre Party that the word 'Eire' be deleted from the document and be replaced by the word 'Ireland'.

MacDermot was an interesting character. He is possibly the most cosmopolitan character ever to get elected in Roscommon. For one thing he lived in Paris. While many of his future peers in Leinster House were hiding in bushes in the hopes of ambushing the local squadron of Black and Tans, he was working as a banker in New York. An unusually anglophile figure in the context of post-independence Ireland, he quit Fine Gael because they weren't sufficiently energetic in promoting the merits of remaining within the Commonwealth. He believed the route to a United Ireland was through converted wooing of the unionist community.

I think that it is appropriate to have a Gaelic word in the Irish text, but I wish to see the country called in the English text by the name by which it is known to all English-speaking inhabitants of Ireland.

The Fine Gael leader John A Costello supported the amendment on the grounds that the new name might create confusion among international observers, who had always known the country as Ireland.

I am interested in the status of this State internationally. In so far as we are known abroad as a nation internationally, we are known by the use of the word “Ireland.” If you put in the word “Éire,” then foreigners may think that there is some distinction between the State that we have here and what has been known for centuries as Ireland.

De Valera, despite his preference for Éire, surrendered the point and agreed to the amendment without it going to a vote. Thus, the country is known in English as 'Ireland'.

Mel Farrell, lecturer in Irish History at St. Patrick's College in Drumcondra, suggests a number of reasons why the term 'Éire' jars with Irish people.

Well, there are two jurisdictions on the island. The term 'Ireland' applies to whole island. English people may have seized on the term 'Eire' because it gave them an excuse not say 'Ireland'. They wanted to avoid describing the Southern Ireland team as 'Ireland' so 'Eire' demarcates the fact that it is the 26 county team they are talking about. This was in the era that the Republic of Ireland used to claim the territory of the whole island.

It is harking back to an era that is obsolete. The term 'Eire' went out of fashion in the late 1940s. But, it continued to be used in England. People don't use the term 'Espania' for Spain, or 'Deutschland' for Germany. There is a sense that other people think that Ireland is being singled out.

Read more: John Delaney Thinks Part Of A Minister's Job Is To Get Stuff For The County

Football
7 months ago
By Eoin Harrington
Five Years On, Robbie Brady's Goal In Lille Stands Alone In Irish Football History
Football
1 year ago
By Balls Team
Watch: Bask In The Commentary From Around The World For That Brady Goal
Football
1 year ago
By Gary Reilly
Watch: Robbie Brady's Post-Match Interview Is The Most Beautiful Thing We've Ever Seen
Popular on Balls
Basketball
1 day ago
By Eoin Harrington
Kieran Donaghy And Tralee Warriors Claim National Basketball Cup Title In Tallaght
Football
1 day ago
By Gary Connaughton
Carragher Reveals Unhappy Instagram Message From Lionel Messi After MNF Comments
The Rewind
1 day ago
By Gary Connaughton
Quiz: From Which Irish County Did This Company/Product Originate?
Football
2 days ago
By Jonathan Byrne
Women Footballers Call Out 'Embarrassing' Sun 'Exclusive'