Why Euro 92 Was The Best European Championships Ever

The final 8-team European championships was a great tournament for those who enjoy the intersection of sport and politics.

The championships were still a compact little event then, run off in just over a fortnight, and easily distinguishable in scale from the World Cup.

Irish supporters of a certain vintage come over all wistful and regretful when Euro 92 is mentioned, gazing into the middle distance and remarking 'that was the one we could have won...'

For the one big thing that Ireland had in common with the eventual winners of Euro 92 was that they hadn't qualified for Euro 92. Not only that but Ireland then pipped Denmark in USA 94 qualification.

Yes, the main thing everyone remembers about it is that a team who didn't qualify for it won it. The Yugoslavian civil war appalled outsiders and under pressure from the international community, UEFA formally banned from the tournament a month out from the start. Oddly enough, it was the very same year that South Africa were ushered back into international competition across various sports.

The Danes were called up. Their star player Michael Laudrup, who already had differences with the coach Richard Moller Neilsen, decided it wasn't worth hassle and opted to stay on holiday.

These days, Danish football writers are inclined to believe that this aided rather than hindered Denmark's progress as he would not have fitted with the defensive, counter-attacking style that won them the tournament. They were underdogs in practically every game, upending France in a do-or-die final group game, a ludicrously star-studded Dutch outfit in the semis, and the world champions in the final.

The political dimension doesn't end with the Yugoslavia/Denmark business. Group 2 provides a belter of a trivia question. Among the eight entrants was the short-term entity known as the Commonwealth of Independent States (CIS).

The Soviet Union had collapsed on Christmas Day 1991. That evening the flag of the USSR was lowered from the top of the Kremlin and the Russian flag went up in its place. By chance, a CNN camera crew captured the handing over of the black case containing the nuclear codes from Gorbachev's men to Yeltsin's people. The next day, the upper deputy of the 'Supreme Soviet' voted itself and the country out of existence.

However, the Soviets had already qualified for the European championships the following year (this wasn't foremost in people's minds during the coup, it has to be said), topping Group 3 and condemning Italy to watching the competition on television.

In order to compete in both the Euros and 1992 Olympics in Barcelona, the newly independent Soviet Republics grouped together under the banner of the CIS, a loose political alliance created after the dissolution of the USSR.

CIS applied for membership of FIFA on 11 January 1992 and were approved two days later. Their first ever match was against the USA in the Joe Robbie Stadium in Miami two weeks later. They had no flag so the Yanks, in a spirit of post-Cold War winning generosity, just threw up the old Soviet flag. The CIS won 1-0 thanks to a deflected goal from Ahrik Tsveiba.

The team was predominantly comprised of Russian players but Ukrainians and Georgians were also well represented. A complicating factor here is that Ukraine and Georgia had already played their first international matches.

In advance of the tournament, the Guardian's Paul Walters profiled the CIS.

The CIS may just about exist in political terms.  In sporting terms it is merely a transitional device.  Its one and only – and suicidal – purpose is to bridge the chaos between between the disappearance of the old Soviet sporting structure at midnight on December 31 and the independent emergence of the various republics of the old Soviet empire.

Few people have ever gone out to put their bodies on the line on behalf of a transitional device. The CIS performed creditably in the opening two group games, drawing with Germany and Holland. In their final group game - and their last ever match in international football - they were hockeyed 3-0 by the already eliminated Scots.

They disbanded almost immediately after the competition.

A ropey enough England team, labouring under confused management, were unimpressive in qualifying but still squeezed through at Ireland's expense following a late Gary Lineker goal in Poland.

At the tournament proper, England were at their most backward and uninspired and were flattered to earn two points. The first came in an extraordinarily lucky draw against Denmark, who had only been pulled off the beach the week before. The second came against France, in a match which has often been shortlisted in worst match of all time polls.

Despite failing to qualify for both Euro 88 and Italia 90, the French entered the tournament as favourites having ran riot in qualifying. However, for reasons that no one could fathom, they turned up in Sweden a different, and much more subdued animal. Eric Cantona was a ghost and their feted attack created precious little, though Papin did nab a couple of goals. Having been proclaimed World Manager of the Year in 1991, Platini buggered off after the tournament and headed for the comfier environs of football administration.

After 180 minutes and no goals, England lost 2-1 to Sweden and went home unmourned. Graham Taylor subbed Gary Lineker in the second half of his last ever match, when just one goal short of Bobby Charlton's goalscoring record. The following day, his head was superimposed on a turnip by the photoshop wizards at the Sun.

It also inspired one of the greats Dunphy and Giles post postmortems.

From thereon, Taylor was relentlessly bullied by the tabloid press, which only increased in intensity during the dark summer of 1993, as England made a hames of qualifying for USA 94. In June 1993, a man called Peter Newman stood as an independent candidate in a UK by-election on the sole platform that Graham Taylor be removed as England football manager.

In his book on the role of the manager, Barney Ronay wrote about Taylor's bizarre standing as one of England's most famous ever managers.

Taylor was not a showman, a big personality or a silk-hat impresario. Yet he remains one of the most famous of all England managers. Perhaps this is because his appearance coincided with the England manager becoming wider public property for the first time, in the same way the actor playing James Bond is, or the host of the Radio 1 breakfast show.

...He was also the first England football manager to feature regularly on Spitting Image, a weekly fixture of the slate-grey John Major years. His voice on the show was provided by Alistair McGowan, who would occasionally take the puppets out into the street to gauge public reaction. "We'd taken Jean Paul Gaultier out, and people had been very friendly," McGowan recalled. "But then we took Graham Taylor into the Coach and Horses in Soho. And this bloke said, 'Oi, Taylor, come here: you are a disgrace. I don't know how you got the job. You should go now' . . . It was amazing, the vitriol I got on Graham's behalf. If that's what the puppet gets, what does Taylor get in person?

Read the rest of this extract from Ronay's book here.

SEE ALSO: Joxer Goes To Stuttgart - Where Are They Now? 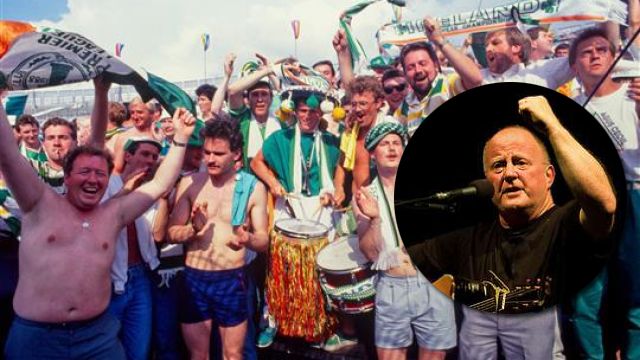