Ireland play their penultimate Euro 2016 warm-up game on Friday when they take on the Netherlands at Lansdowne Road.

For the 31 players still remaining in Martin O'Neill's provisional squad - yesterday he cut Paul McShane, Alex Pearce, Anthony Pilkington and Johnny Hayes - it is a game of major importance, especially for those on the bubble when it comes to inclusion in the final 23.

One position where you feel O'Neill already has his mind made up is the three goalkeepers he will take to France. That's despite four keepers still being in the provisional squad.

Darren Randolph, Shay Given and David Forde are highly likely to those chosen.

Randolph has the evidence of the latter qualifying games and the playoff behind him. He also has that FA Cup run with West Ham.

Given has the experience.

David Forde appears to have the favouritism of the Irish management. That's despite spending most of his time this season attempting to find comfort on the Millwall bench. 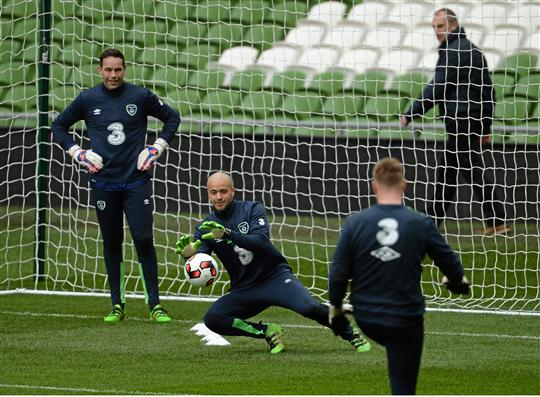 The 36-year-old - who, to be fair, has done very little wrong when called upon by Ireland - started just seven games in League One this season. The last of those came back in January.

If the choice was based on stats and form, it would be a no-brainer. David Forde would be watching Euro 2016 from his couch and Keiren Westwood would be in France.

On form, right now, Westwood is our best goalkeeper.

On Saturday, he will line out at Wembley as Sheffield Wednesday take on Hull for the payday that is promotion to the Premier League. His participation in the game means he has been unable to take part in Ireland training during the run-up to the two pre-tournament friendlies.

Last season, Westwood was named in the Championship Team Of The Year, keeping a club record-equalling 17 clean sheets. In 2015/16, his form has been less spectacular - 14 clean sheets so far - but it still has been excellent for Sheffield Wednesday in their run to the playoff final.

Chris Holt of the Sheffield Star is a regular watcher of Westwood and well-aware of the 31-year-old's abilities.

You'd have to be thinking that if Keiren plays in that game [playoff final] and plays well in front of a big audience, he's going to be on a big high if Wednesday do well in that.

If it was me, I would take him. He'd be in my squad every single time because of having watched him a lot, I know what he's capable of. The playoff final shouldn't rule him out but obviously, it's less chance for him to impress O'Neill because he's obviously not around for that first game.

The last time Westwood played for Ireland was a friendly against England last summer. Since then, he's been a regular in Martin O'Neill's provisional squads but never makes it to the trimmed down version. There's a sense O'Neill likes to keep his options open by selecting Westwood for the larger squad.

That he doesn't get more opportunities with Ireland is something which bemuses the Sheffield media as much as it does many Irish fans.

He's been superb all season. There is a wonder here why he doesn't get more of a chance. It's clearly just coming down to personal preference. He obviously has his choice in mind about who he wants to be his number one. Then in terms of backup, he feels Keiren misses too many games and picks up too many injuries so he's not reliable from that perspective.

He's regarded as the best keeper they've had since Kevin Pressman. Fans just can't understand why he's not being picked. I don't think they're losing any sleep over it because if he's not playing for Ireland, he's not going to get injured and he's more likely to be fit for Wednesday.

Still, there's a sense that he's not being recognised for how good he is.

What Holt says about O'Neill is correct. Prior to the March friendlies against Switzerland and Slovakia, he expressed concerns about Westwood's reliability in terms of fitness.

Keiren has pulled out of a number of squads, not just in my time but I think he did it before.

Therefore, naturally, it’s a concern but I think it’s something...you need a bit of reliability.

I think that is very, very important - important for anyone you are studying or wanting to bring into the squad.

I have never doubted Westwood’s talent.

I had him for a year (at Sunderland) and he played some of the games and he missed out through illness when I brought Simon Mignolet into the side at Sunderland. And Simon did so well that he stayed in the side.

But Westwood has got back in again and is doing very well at Sheffield Wednesday. He has missed the occasional game at Wednesday as well too, not just for international matches.

He’s a talented boy, definitely, but of course I would have a bit of concern.

While O'Neill's concerns may have had foundation in the past, post-Christmas it's very hard to make that argument. Westwood has been solidly reliable. Nine of his 14 cleans sheets have come since mid-February.

A thought here has often been that, rather than seeing Westwood as unreliable, there is a personality clash between the goalkeeper and Martin O'Neill. That is an idea which has also popped up among the Sheffield media but one which has been refuted in the past by O'Neill.

How Westwood feels about not being a regular for Ireland is hard to tell, it's not often the press in Sheffield get to speak with him.

Still, Holt believes that while Westwood isn't torn up about not playing for Ireland, he would be more than happy to pull on the jersey when required.

He doesn't talk much anyway. He's never put forward for press so you don't really get much out of him. You get the sense that it's not something he concerns himself with really. He's not beating himself up over it. It's just get on with it at Wednesday and whatever happens, happens.

I don't get any sense that he doesn't want to play. Not at all.