Bohemians boss Keith Long remains coy on the prospect of a potential Ireland call-up for his in-form striker Georgie Kelly despite his rampant run of form.

Kelly added to his 12-goal league tally with two more goals in Europe on Thursday night against F91 Dudelange.

It was his fourth goal so far in Bohs’ Europa Conference League adventure, and his boss Long is hoping that he can continue his rich vein of form for the Gypsies.

“Georgie is playing at the top of his game,” Long said on Thursday night.

“He has never played this amount of games. He went on loan to Pat’s and played a lot [last season] but he’s getting goals and is playing well [now].

“His overall play is good and he’s also bringing other players into the game. We’re delighted with his form and for him on a personal level because he took a bit of flak earlier on in the season.

“He’s come through and has risen above it. He’s our talisman. How far can he go? We just want him to do as well for us as possible and get goals for Bohemians.

He’s really enjoying his football and the supporters have really taken to Georgie. It’s not for me to see where he sits in the international reckoning.

Obviously, we’re not blessed with goal scorers and he’s doing it on the European stage.

If he continues to do that, I’m sure Stephen [Kenny] – who has worked with him before – knows his attributes and capabilities.

Why not? But at the same time, we want Georgie to be with us banging in the goals. Where his goals and streak take him is for other people to judge.

Long added: “He is the complete striker at this moment. He works so hard and is playing fantastically well.

“He’s playing full of confidence. He has been brilliant for us and whatever recognition he gets is well deserved.” 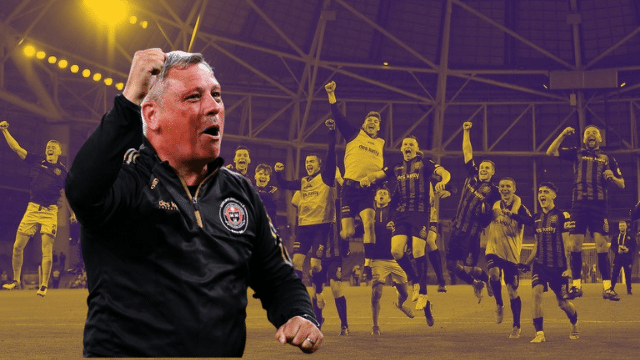 Football
4 months ago
By Andrew Dempsey
Bohs v Derry City Last Night Was Beautiful Madness
Popular on Balls
Rugby
2 days ago
By Colman Stanley
Keith Earls Shares Story That Captures Andy Farrell's Decency
Football
1 day ago
By PJ Browne
'If He Continues With Performances And Goals Like That, Stephen Kenny Will See It'
Football
2 days ago
By Eoin Harrington
Quiz: Name Every Player To Score In A Champions League Final
Football
20 hours ago
By Gary Connaughton
Portsmouth Likely To Retain Gavin Bazunu This Month Despite Championship Interest