The Winner Of The Balls.ie Man Of The Year Is Being Announced: LIVE 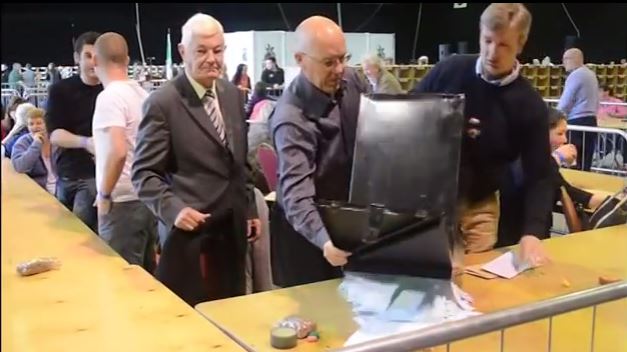 You join us live here in the RDS as the Balls.ie Man of the Year award winner is about to be announced. Six candidates are in the running to take the position from Shane Curran.

They were Kieran Donaghy, Mick Barrett, Ger Brennan, Eamon Dunphy, Mike Kay and Fergus McFadden. Here is what they had to do to get their names on the ballot paper.

As ever, the first people to cast their vote were those in Aranmore, off the coast of Connemara. Ballot boxes had to be transported to the mainland by currach. They arrived here in Ballsbridge a couple of days ago.

Both Eamon Dunphy and Mike Kay dropped out of the running early on - their campaign teams have left the count centre some time ago. Kay's candidacy never got going. The low turnout in the UK didn't help him either.

I'm down here at the RDS, live at the count for the @ballsdotie man of the year. It's a all very tense. Audio report coming shortly.

It was also clear last Monday night that Eamon Dunphy was not polling well, despite his strong campaign ad. It was anticipated that Dunphy might use his slot on Game On on 2FM to make an early concession speech, but he opted not to do that.

Fergus McFadden's campaign attracted much public goodwill, but he didn't receive enough first preferences to really put him in the running. Kieran Donaghy polled well early on and was bookies favourite - but ultimately was squeezed by the big two.

It was clear from Tuesday evening onwards, that this was a two horse race between Mick Barrett and Ger Brennan

Barrett's candidacy, scorned by the national media up in Dublin and the subject of much negative comment on social media, nonetheless attracted a groundswell of support from those disillusioned with the whole Man of the Year process.

We've an update from our reporter down at the count centre, Mark Farrelly.

It's now a two way battle between Barrett and Ger Brennan, who garnered a huge amount of votes in his Dublin heartland - where turnout was particularly high.

The new darling of liberal Ireland, leader writers and opinion columnists extolled the virtues of Brennan's candidacy - following his moving shout out to the boyfriends of the triumphant St. Vincent's players at the end of the 2014 club All-Ireland final. As many gay rights activists pointed out, whether or not there were any actual boyfriends wasn't the point.

Many have compared his candidacy to Mary Robinson's successful run in 1990.

Will this get him over the line? Only time will tell?

The returning officer is making his way to the podium here at the RDS. I think we may have a final count in the @ballsdotie man of the year.

The returning officer is getting to the podium now... The Taoiseach, Martin McGuinness, David Norris and the former Tanaiste have gathered to hear the announcement...

She's running through the names of all the candidates in Irish now. Remember, it's a two horse-race. You've got to feel for the candidates at this point. 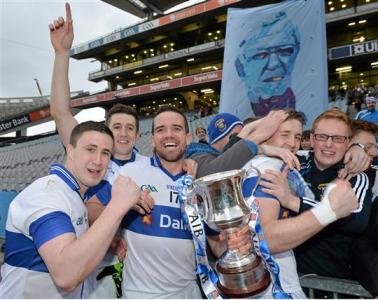 Well there you have it. The rest of the returning officer's announcement is drowned out.

Ger Brennan is the winner of the Balls.ie Man of the Year award 2014. He succeeds Shane Curran and Eamon Keegan before him. Delirious scenes down in the RDS. A magical night for the Brennan campaign.