'Without A Shadow Of A Doubt' The Most Hostile Atmosphere The Irish Team Have Ever Faced...

There was a lot of looks. Just staring. I can remember (Roy) Keaney staring at me, as if to say, what you been doin? I had, sort of, blood on my face and on my chest. No one really said a lot...

In Tony Cascarino's final few minutes in an Irish shirt, he was kicked, spat at and punched by the same Turkish defender. For his involvement in the inevitable post-match scuffle he was handed a four-game ban, immaterial considering he was retiring anyway. His attacker saw no ban.

When I came on with ten minutes to go, the Turkish defender kept kicking my feet as I was running and then he spat at me during the game. And I thought 'Ah, not nice'... and I remember thinking, 'if we go out here, I'm going to clip his legs as he runs away'. And after the final whistle went, I've clipped his heels, and he's looked around and he's just punched me straight in the face.

And after that, it just became a free for all and I was in the middle of it. It was very strange.

Few in Ireland saw the game. The Turkish satellite channel Star TV held the rights to the game and had originally signalled their intention to charge RTE £1m for the match.

On the Friday before the game, they abruptly decided that this was much too generous and upped the price by 200% to £3m.

The day of the first leg, RTE Head of Sport Tim O'Connor told the Irish Examiner he was confident that 'sanity would prevail' at Star TV and that RTE believed the Turks would blink in the negotiations.

However, insanity reigned supreme. In keeping with their supporters and their police force, the charmless Turkish TV heads were determined to make life as awkward as possible for their visitors.

Negotiations broke down and supporters had to tune into Gabriel Egan and co on RTE Radio One to catch the biggest Irish match of the year.

That Ireland found themselves in the playoff at all was a source of regret. Landed in a testing group with Yugoslavia and the third placed team at World Cup 98 (though, history tells us that this is a positive) Croatia, Ireland won all four of their home matches.

It was away from home where things went awry.

Back in the Charlton era, Irish football fans of a quirky or superstitious bent lived in fear of the Jimmy Magee curse. When George Hamilton was in his rightful perch in the commentary box, microphone pressed up against his philtrum, Ireland would go game after game without losing.

This would continue was until the powers that be decided that the grandeur of the occasion called for the experience of the memory man, whereupon the whole thing would come crashing down around our ears. This, essentially, is what happened at Italia 90.

The Euro 2000 campaign saw the birth of another curse. Less than two months after going live, TV3 broadcast their first Ireland international game in Yugoslavia.

Ireland managed only four points from the four games broadcast on the channel. Rationalists might be inclined to point out that Ireland's poor record in games screened by TV3 might have something to do with the fact that they only held the rights to away games, but the public weren't inclined to cut the channel any slack. As Ryle Nugent has pointed out, the public's hostility to 'the new' knows no bounds. In addition to the excessive complaints about the commentary and the presentation, the curse became part of folklore.

Ireland's performance in Croatia was reminiscent of the 0-0 draw in Moscow in 2011, with one very important difference. Laid out on the rack for the entirety of the game, Ireland somehow avoided conceding until the 95th minute when World Cup golden boot winner Davor Suker stabbed home the winner.

Ireland's propensity for conceding goals against the opposition's star striker was in evidence in Yugoslavia as Predrag Mijatovic scored the winner. Ireland gained revenge back in Dublin, with a Mark Kennedy screamer securing the three points.

Ireland arrived at the final match with everything to play for. They were part of a three way chase for the automatic qualifying spot. Yugoslavia sat top on 16 points. Ireland were one point behind with Croatia a point further back.

The Yugoslavs were away in Croatia, while Ireland had to head for the nightmarish venue of Skopje. Assuming Yugoslavia failed to win in Croatia, three points in Macedonia would see Ireland through.

Entering injury time, nerves were jangling but we were set for qualification. Landed on his backside, Niall Quinn stuck out a leg and stabbed the ball into the top corner for an opportunistic early goal. Entering injury time, this was the only score of the game. The scores remained tied in Zagreb. As things stood, Ireland were going through automatically, while Yugoslavia would enter the crap shoot of the playoffs.

Enter long haired midfielder Goran Stavrevski. His bullet of a header had several consequences. One such consequence was to cause Denis Irwin to lose his rag for possibly the first time in his long career.

And so Ireland were consigned to the playoffs. Unseeded, we decided that we should be okay so long as we avoided Turkey. Turkey were the ones to avoid. Don't like the look of Turkey. Just don't get Turkey. We drew Turkey.

The home game, screened on both RTE and BBC, was played on Saturday, 13 November. After much huffing and puffing, it was safely established that the Turks were no great shakes. Robbie Keane blasted Ireland in front with eleven minutes remaining. A 1-0 win would be a nice thing to pocket heading out to Turkey.

Four minutes later, Lee Carsley, lying on the flat of his back after an attempted block, flailed at the ball with his hands when it flew back in his direction. The Turks despatched the penalty. 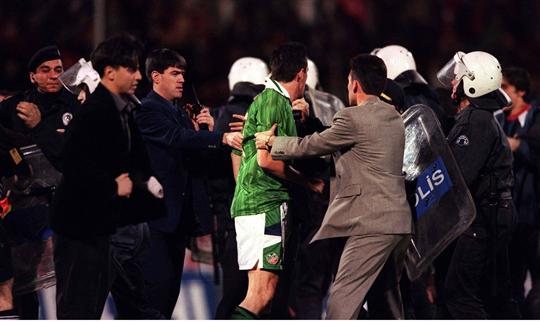 Notwithstanding the importance of the away game, the details of the night remain rather opaque in the mind of supporters. This is largely down to the TV blackout. There may have been highlights shown but few were in the mood to watch them.

When Manchester United travelled to Istanbul in the mid-90s, the players were greeted with 'Welcome to Hell' banners upon arriving at the airport.

The Irish game was played in Bursa in the north-west of the country rather than Istanbul, but it turned out that any Turkish city could transform into 'hell' depending on where the national team were playing.

For Cascarino, the hostility of the reaction that night easily tops that afforded the Irish players in Windsor Park in 1993.

It is, without a shadow of a doubt, the most hostile place I've ever played football. And how they haven't been banned over the years, I do not know...

The game itself was significantly less eventful than the happenings off the pitch. The main frustration was Ireland's failure to create any clear chances.

I think we were a group that was a bit disillusioned after the game. The two games were very frustrating. Aside from the goal in the first leg, we never looked like scoring over the two legs. Especially, the second leg. We played Quinny up front on his own, and he was doing a kind of lone ranger job without much service and there was no real golden opportunities.

You know when you go out in a whimper? Which wasn't really us. We didn't go out in whimpers. We expected to throw the kitchen sink at teams.

Cascarino doesn't recall the name of the Turkish defender with whom he 'tussled' in the last few minutes. The Irish Examiner showed a picture of him squaring up to the full-back, Ali Eren, but he may not be the guilty party. The papers reported that Cas was 'intent on seeking retribution' whereupon he was set upon by a few pitch-invading fans. 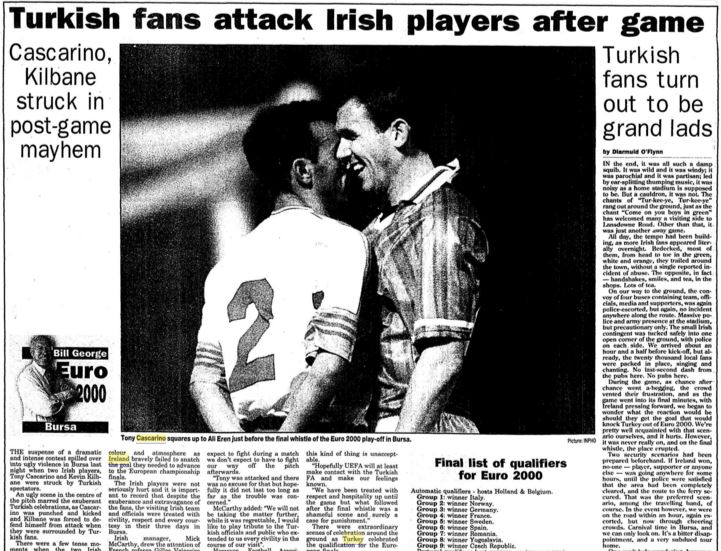 While the Turkish riot police were praised for preventing Cascarino and Kilbane being engulfed by riotous and malevolent Turkish supporters, the player remembers the Turkish police adopting a rather laissez-faire approach once they reached the tunnel.

It was very hostile. When you go to Turkey, the police are not too helpful to you. In the tunnel afterwards, there was a lot of scuffling going on and the police were turning a complete blind eye.

Sixteen years later, Cascarino's assessment is that the team were still shy of where they needed to be. The transitional period wasn't yet complete. The process, which began in the middle of the 1995, when the team of the early 90s began to creak badly, hadn't concluded. By 2000, Cascarino was one of the few remaining veterans of Italia 90. He knew his time was up.

I felt that between 1996 and 2000, we were a nation that were just getting over the players who had been so successful. It was all just petering out and I was the last man standing.