With the World Cup only a day away, all of the major broadcasters will be gearing up for a massive month of coverage. BBC, ITV and RTÉ have all assembled impressive pundit teams, which got the office to thinking; which station would have the best 5-a-side team?

Michael O'Neill just edges Brian Kerr as the manager, and to keep the old guard happy an additional RTÉ panel will be assembled consisting of Eamon Dunphy, John Giles and Liam Brady, to criticise RTÉ for their defensive style of play.

RTÉ will line up with Hope Solo in goal and Richard Dunne at the back. A midfield duo of Didi Hamann and Damien Duff will supply balls to Richie Sadlier. Given and Andrews will have to be content with a place on the bench. 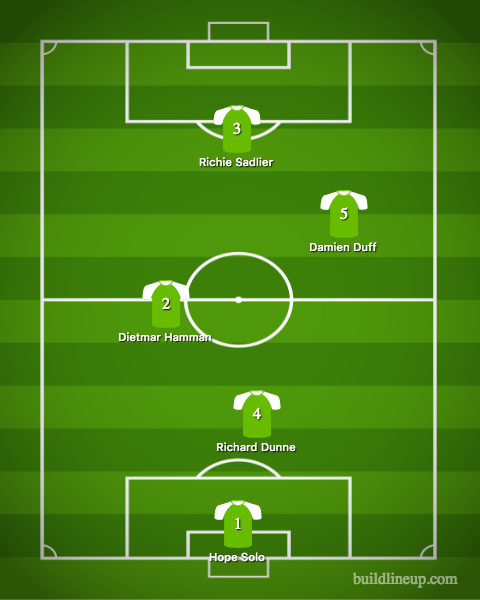 BBC have come out will all guns blazing this summer, their roster including the likes of Rio Ferdinand, Frank Lampard and Alan Shearer, Phil Neville, Danny Murphy, Martin Keown, Jermaine Jenasas as well as England women's defender Alex Scott. There is also some foreign influence in the form of Didier Drogba, Pablo Zabaleta, Cesc Fabregas. Former Germany and US manager Jurgen Klinsmann will take charge of a star studded BBC roster.

The Beeb will have to stick Phil Neville in goal and Rio Ferdinand will have to make do with a place on the bench as the World Cup pundit 5-a-side requires at least one female pundit to be in the starting team. In lieu of that Alex Scott takes his place in defence.

Midfield is tricky but Lampard and Cesc Fabregas are the picks to feed Didier Drogba in a continental BBC line-up. 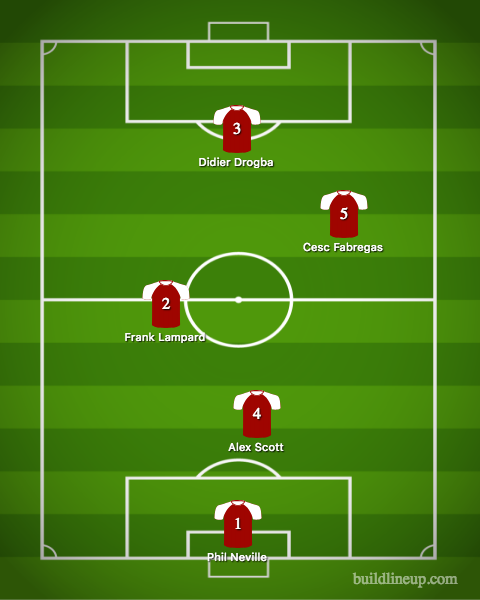 ITV have a stable of analysts including Roy Keane, Ryan Giggs, Patrice Evra,  Henrik Larrsson, Gary Neville, Ian Wright and Lee Dixon. Joining them will be England women's striker Eniola Aluko, who will spearhead ITV's attack. In midfield Roy Keane and Ryan Giggs will dictate play in front of Patrice Evra. Lee Dixon will draw the short straw and end up between the sticks for his side. 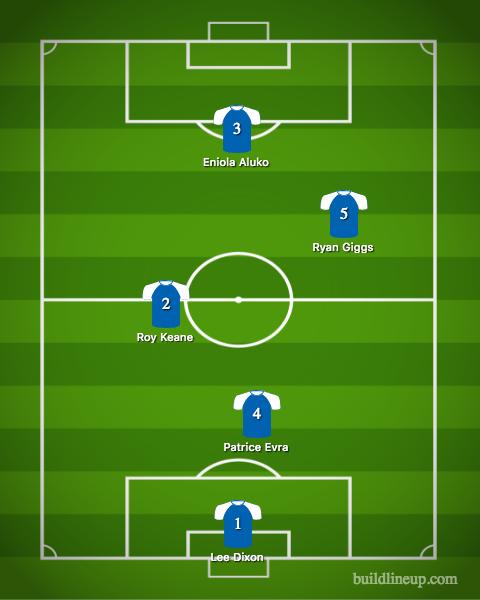 Each team plays each other once, with RTÉ facing the BBC in the first match. The BBC race into an early lead, with Drogba bullying an out of shape Dunne to leave the scores at 2-0 at half time.

RTÉ then move to a defensive formation in order to avoid an embarrassing defeat, relying on set pieces to get back into the game, and this tactic proves fruitful as Alex Scott and Phil Neville make a calamitous mistake to let Richie Sadlier in to head home from a corner. Duffer then equalises from a free kick after Alex Scott tries to break Sadlier's leg.

RTÉ shut up shop at 2-2 and despite a Frank Lampard shot crossing the line, no VAR is in place to give the goal meaning RTE claim a valuable draw.

Next up the Beeb take on ITV in the grudge match of the tournament. Again the BBC's defence is breached as a tame Eniola Aluko shot bobbles past Phil Neville, though ITV have their own defensive mishap as Lee Dixon and Patrice Evra clash after a through ball by Fabregas, leaving Didier Drogba to tap home bring his team level.

The game will then fizzles out somewhat, until Roy Keane grabs the game by the scruff of the neck driving forward, (despite his dodgy hip) and expertly placing the ball beyond Neville to give ITV the lead. The score ends 2-1 to ITV.

RTÉ who are slightly fresher than ITV following their rest, race into a one-nil lead against the British broadcaster in the final game of the tournament, Didi Hamann's powerful volley giving them the first goal of the game. However, this proves to be disastrous for the Irish broadcaster as RTE sit deeper and deeper, allowing ITV control of the ball.

RTÉ start to lose their concentration After some goalmouth scrambles ITV finally manage to breach a resilient Irish defence, with Ryan Giggs hitting the ball off of Ricard Dunne to add another own goal to his tally.

At this point Eamon Dunphy, who is still calling for Wes Hoolahan's introduction into the RTÉ line-up despite his lack of media experience, takes it upon himself to enter the fray and is sent off after 30 seconds after a reckless tackle on Eniola Aluko. In the ensuing melee Keane is sent off for punching Dunphy, leaving both sides with four players for the final ten minutes.

Keith Andrews replaces Dietmar Hamann, and his industry works a corner for RTÉ deep into injury time. Richard Dunne ambles up for what has to be the last action of the game and from Duff's cross powers the ball past Dixon to give RTÉ the win, and bragging rights over their neighbours across the pond.

Dunphy would still complain about RTÉ's style of play after the result.

Football
2 years ago
By Maurice Brosnan
Chelsea, Man City and Man United Players In Breach Of Contract After World Cup Return
Previous Next

Football
3 months ago
By Maurice Brosnan
Balls Remembers - The French Meltdown At World Cup 2010
Football
4 months ago
By John Dodge
All 30 Men Who Have Played In The League Of Ireland And Gone To The World Cup
Football
2 years ago
By Maurice Brosnan
Chelsea, Man City and Man United Players In Breach Of Contract After World Cup Return
Popular on Balls
Cycling
11 hours ago
By Gary Connaughton
Sam Bennett Ready For Victory In Tomorrow's Final Tour De France Stage
2