We haven't even had a football kicked at Euro 2020, and we've had the worst take of the tournament. Piers Morgan could go two-footed on Gareth Southgate's waistcoat for holding England back and he wouldn't top this.

Today, David Yelland, a former editor of the Sun now working in public relations, offered a unique lesson on recent football history when he tweeted the following:

If England win #EURO2020  kudos will be due - but not given (!) - to Rupert Murdoch whose vision created the modern @premierleague - and transformed clubs' balance sheets - & @ManCity's Pep Guardiola for perfecting our game and players. 👕🌈❤️🙏 #RupertandPep

Firstly, it's a very strange sentiment to air on the day the tournament begins. Perhaps if England were in the final, we'd understand the point of airing this controversial opinion. England haven't won a tournament in 55 years so we don't really understand the rush to be in first here.

Secondly, the key argument doesn't hold up to any scrutiny. The Premier League was started almost thirty years ago. In that time, England have underperformed massively on the international stage. Their last foray in this tournament saw them defeated by Iceland. Yelland is right, obviously, about the balance sheet of Premier League clubs being transformed in the last three decades, but it's highly debatable that this has benefitted the England national team. There were six England players in the PFA Team of the Year in the first year of the Premiership. This year, there were three. Last year, there were three.

We know the internet is vast reservoir of bad takes, but this one struck as exceptional given that the author has held important jobs, like editing newspapers for Rupert Murdoch.

How and ever, the tweet has prompted some excellent replies. We've written this article with the aim of pointing them out to you.

This is one of the most, if not the most,
incorrect opinions I have ever seen anywhere on the internet.

It’s people like this that give us baldys a bad name https://t.co/DQwtsJsUq7

Hi plan was Danny Ocean-esque in its execution. Establish Premier League, lure other nations into complacency with 30 years of chronic underperformance then BANG maybe win a tournament at home. Beautiful. 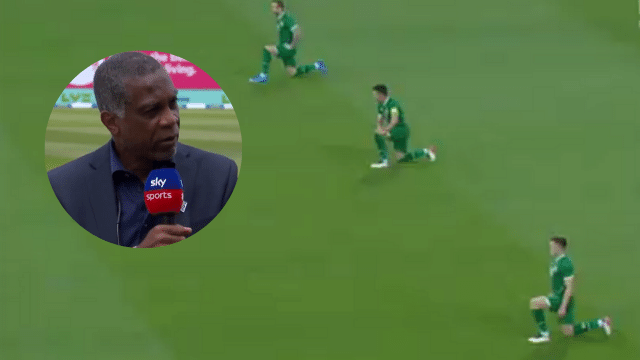 Football
1 hour ago
By Michael McCarthy
Marko Arnautovic Gets One Game Ban - Is It A Cop Out?
Football
3 hours ago
By Donny Mahoney
VAR At The Euros Has Proven How Poor Premier League Refereeing Is
Football
18 hours ago
By Emmet Bradshaw
Sadlier And Hamann Absolutely Nail Football's Backward Concussion Attitude After Pavard Collision
Previous Next