It's been a weird transfer window, Juan Cuadrado went to Juventus on a 3 year loan, presumably never to return. As well as that Jack Wilshere has actually left Arsenal and gone to Bournemouth on loan.

Both stories are strange in their own rights, but the weirdest story of the transfer window gone by undoubtedly belongs to Yann M'Vila. Despite being linked with Sunderland all day yesterday, today the 26-year old is still a Rubin Kazan player. Bad times.

When M'Vila posted this picture to his Instagram, most took it as a sign that he was going to sign for Sunderland, even though Sunderland is definitely not in London.

The Frenchman played for Sunderland on loan last season and made 37 fist team appearances. Unfortunately for Mr. M'Vila, the deal fell through for unknown reasons and he was left in England with no club. Clearly devastated by his wasted trip to England, M'Vila posted this to his Instagram account before quickly deleting  it. 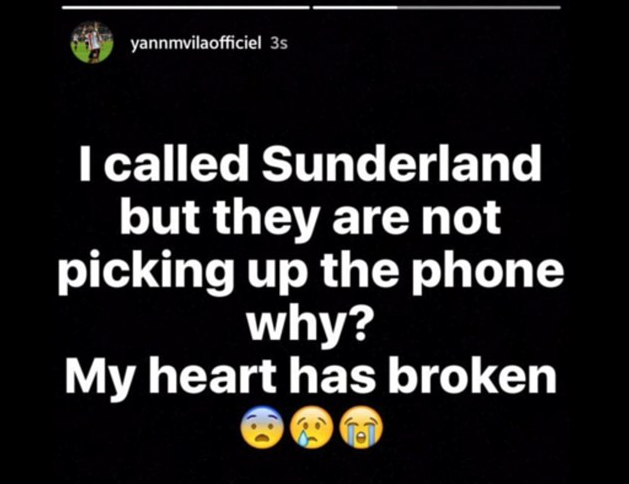 Ouch. They signed Didier Ndong instead so I can imagine the lads at Sunderland just awkwardly ignoring his phone calls and waiting for him to get the point. Harsh enough.

Presumably Sunderland were reluctant to meet a reported £7m price tag on M'Vila's head, so will snap him up as a free agent when his contract ends, which is in January. Anyway Yann is heading back to Russia to see out the remainder of his contract with Rubin Kazan. But it's not all bad because at least he has sunny Sunderland to look forward to in January.

Fans are understandably upset as M'Vila had become a fan favourite during his time at Sunderland, helping them to survive relegation.

Oh well, maybe he should turn to songwriting and harness the heartbreak and rejection.

Dear Moysey, I wrote you but you still ain't calling
I left my cell, my pager, and my home phone at the bottom
I sent two letters back in Autumn, you must not-a got 'em
There probably was a problem at the post office or something