Joe Canning On The Importance Of Rehabilitation, Nutrition And Sports Science

Last August, Joe Canning lay on the Croke Park surface in agonising pain with one hand on his hurl as the other gripped his left leg. The three-time All-Star was subsequently helped to his feet before limping off field. Everyone inside the stadium that day knew Canning wouldn't reemerge from the tunnel for the second half of the All-Ireland semi-final.

The Galway hurler's season was cut short through a serious hamstring injury.  For such an influential player's season to come to an end under those circumstances seemed unjust.

Despite the setback, Canning appeared in a rather jovial mood as he instructed a class in FLYEfit gym on Baggot Street - just five months on from that injury.

Before proceedings, the Portumna man mentioned the fact that it would be one of his first strength and conditioning workouts since the injury. Yet, there is little to suggest that Canning was in any way struggling as he completed each set with relative ease.

Afterwards the Red Bull athlete spoke to Balls.ie about the slow - but necessary - rehabilitation process and why patience truly is a virtue when it comes to recovery. 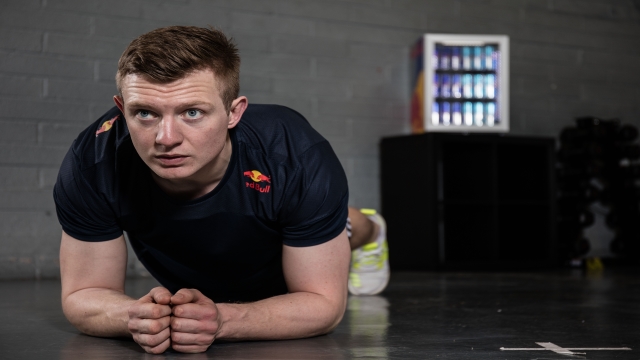 The Importance Of Rehabilitation

A lot of the stuff that I’ve done in the past – like, when I got surgery I was in a knee brace and on crutches for six weeks.  So I couldn’t really do anything for that time.  I was just laid up. When I got back, it was learning about how to walk on it [his left leg] again and doing a lot of pool work.

Dave Hanley and the physios at Galway got me doing a lot of glute work. A lot of bridge work and stuff like that.  Hamstrings, RDL [Romanian Deadlifts] with no weight.

At the start, it was all non-weight bearing more so that anything just to get the movement back into it. Gradually as I progressed, there was a lot more hamstring and glute work to try and build up the muscle again. It was basically the same work until I could get onto the field and started gradually jogging.

It was an unusual type of injury, ‘cause it was the tendon.  I went to the Sports Surgery Clinic in Santry first and foremost then he sent me down to Cork to Professor James Harty.  He operated on me, so it was just taken from there with the physios.

When it comes to nutrition, I would definitely be more in favour of eating food than protein products, or stuff like that.  I’d rather get my proteins out of natural food than a shake, it’s just much better that way.

If you can’t get to food after a workout, then I’d be happy to take it. I try to eat whole foods as much as I can and stay away from stuff that you can buy off the shelf.  Fresh food is obviously the best.

It’s something that I’ve grown up with since Dad has a garden at home. So, he grows a lot of the vegetables and stuff like that. We live on a farm so we have the meat from there.

It’s just handy when you come from a country house as you’re surrounded by a lot of fresh produce.

I’d generally only consume natural food but may take a few vitamin pills in the winter months as I’d be on the go. But I wouldn’t be hugely into taking too many supplements to be honest.

At 28 years of age, Joe Canning is part of the ever-changing sporting landscape. While the Galwegian is a traditionalist when it comes to nutrition, he is in favour of sports science technology to further enhance his performance on the pitch.

Why The World Should Embrace Sports Science

I’ve been on board with Red Bull for the last number of years.  As a company, they’re involved with a lot of cutting edge type of stuff.

They’re always looking to support us in any way they can, even if it’s through giving us the opportunity to go to Austria.  I went to their testing centre out there, where you go over and get tested in every aspect.  From your strengths and your weaknesses, right down to your intuition.

They do tests on you to figure out whether your left side is quicker at reacting than your right side – even with your eyes.  Honestly, it’s mad what they can do.

They have gifted me the opportunity to help me further understand my body to become a better hurler and sportsperson. That’s something I’m hoping to do again in the next month or so.

Fuel
1 month ago
By Sean Meehan
WIN - A WHOOP 4.0 Strap And 12 Month Membership
The Rewind
1 month ago
By Jonathan Browne
Have A Look At The Chris Hemsworth Workout For Extraction 2
27

Fuel
1 month ago
By Sean Meehan
A Day In The Life Of A WHOOP User: Lauren Guilfoyle's WHOOP Diary
Previous Next

Fuel
1 month ago
By Sean Meehan
WIN - A WHOOP 4.0 Strap And 12 Month Membership
The Rewind
1 month ago
By Jonathan Browne
Have A Look At The Chris Hemsworth Workout For Extraction 2
Fuel
1 month ago
By Sean Meehan
A Day In The Life Of A WHOOP User: Lauren Guilfoyle's WHOOP Diary
Popular on Balls
Football
10 hours ago
By Eoin Harrington
John O'Shea Explains How He Ended Up In Goal For Manchester United In 2007
GAA
17 hours ago
By PJ Browne
Three Live Club Football And Hurling Games On TV This Weekend
GAA
12 hours ago
By PJ Browne
Incredible Penalty Halts Premature Celebrations In Galway
GAA
13 hours ago
By Maurice Brosnan
'Bad Coaching. I Think That Is A Big Problem In The GAA'