Balls met up with Leinster back row Jordi Murphy at the launch of the brand-new twelve-week intensive membership at The Health Club at The Shelbourne Dublin, which has been designed in partnership with the the 14-cap Ireland international.

The 24-year-old spoke at length about Leinster's recent woes ahead of their do-or-die double-header with European champions Toulon next month, re-iterating his belief that Les Bleus can ease those blues and progress to the Champions Cup quarter-final, while also dropping a not-so-subtle hint that he'd love to see his fellow Irish international Robbie Henshaw wreck lives at the RDS.

Given that he was attending the sit-down event in The Shelbourne to discuss its health club's new fitness initiative, Murphy also provided us with some insight as to how to create an effective, enjoyable workout routine on a weekly basis, revealing the pattern with which fitness training is done in the Leinster setup, and even questioning some of his teammate's music choices during weights sessions.

Well first of all, I definitely think technique is invaluable, really. Don't try and overdo it at the very start. You want to build yourself a good base and the weight you put on it will build and build after that.

2) Vary Your Own Personal Programme

Not just to focus on a certain body part - from one day to the week, change it up. Do some legs, then some upper body. Don't, obviously, just focus on upper body.

3) Vary The Different Workouts Within Your Own Programme

Don't do the same excercises for four, five, six weeks - the body kind of starts to plateau then and you don't get as much out of it as you might at the start. Tailor your programmes.

Nutrition is a really big part of it. You can lift all the weights you want, do as much training as you want, but if you're not on top of your fitness you're not really going to see the results that you want at the end of the day.

Just to vary it as well, a bit of aerobic stuff. Obviously, depending on your situation - whether you're outside running or on a treadmill, rowing... That variety is going to benefit you the most. 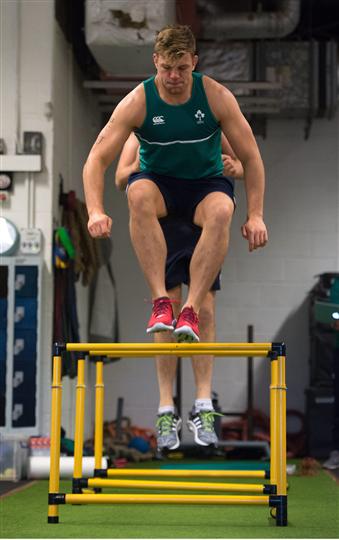 Murphy, who made his Ireland debut at Twickenham during the 2014 Six Nations, also explained to us the rigours of his training routine on a week-by-week basis, and the mindset a professional rugby player should have to get the most out of training:

I'd start off the week with lower body weights, a bit of explosivity, plyometrics and things like that, into some heavy squatting. Then, we'd go in afterwards in the afternoon and have a pitch training session.

And as the week kind of tails on, you start to do a bit more upper body because you'd wanna be looking after the legs if the game's coming up at the weekend.

I suppose the mindset you'd want to go in with is to just give it 100 per cent; it's a competitive environment in the game that I play, in Leinster rugby and with Ireland, for example, when I'm in there. So you've got to just bring your A-game to every single part and if you're as professional as you can be about it, you get the most benefit out of it. And the team and the people around you will as well.

The people around him, however, apparently can't be trusted to put on a decent tune to carry their teammate through the tail-end of a monumental gym session.

The tension was palpable as the young Leinster star described the lack of gym playlist etiquette displayed his fellow Leinstermen:

I suppose music is always great, but it depends on what kind of tunes you're playing. Some of the lads have a bit of Justin Bieber going on which doesn't help you towards the end.

No, I suppose it's just that...you've always got these scores in your head that you want to achieve, and the coaches are giving you scores which go up and up by the week.

It's one of those things where you never want to fail so you just try to push yourself and push yourself, and when you get to that point where you've pushed yourself as far as you can, it's a really good feeling.

Another man who's no stranger to pushing himself that extra yard is Murphy's Ireland teammate, Robbie Henshaw. And with reports that the explosive Athlone man is set to move east at the end of his contract, Murphy smirked when asked by Off The Ball's Ger Gilroy whether he'd fancy having the current Connacht 12 line out alongside him at the RDS.

Yeah, it'd be nice [to have Henshaw play for Leinster].

He's been pretty tough to play against, and going down to the Sportsground - we've lost a few times down there, now. And a lot of the times it's been down to his magic and the way he plays.

Considering he's so young as well - I mean he's only 21 or 22 - and you can still see he's the kind of driving force behind their team, everyone looks up to him and he usually delivers.

I wouldn't mind having him at Leinster, now, no.

Those Leinster gym sessions might just get that bit more competitive from the summer of 2016.

Jordi was speaking at the launch of the brand-new twelve-week intensive membership at The Health Club at The Shelbourne, which has been designed in partnership with Jordi.

Three-month intensive membership costs €600 per person and members receive a complimentary nutritional starter pack that includes all that is needed to kick-start their programme as well as guidance, tips and expertise drawn from Jordi Murphy’s own training experience.

In The Gym
2 years ago
By Vickey Nolan
7 Misconceptions That Many People Have About Trying To Get Fit
Fuel
3 years ago
By Balls Team
How The Humble Squat Is A Metaphor For Life Itself
Fuel
4 years ago
By Mark Farrelly
8 Great Gym Exercises From Two Of The GAA's Top Stars
Popular on Balls
Rugby
2 days ago
By Colman Stanley
'That Pace, That Intensity, That Organisation' All Black Legend Has High Praise For Leinster
GAA
2 days ago
By PJ Browne
Cusack Has Little Sympathy For Gearoid Hegarty After Red Card
Football
16 hours ago
By Colman Stanley
Wagatha Christie Trial Sheds New Light On England's Euro 2016 Disaster
GAA
22 hours ago
By PJ Browne
GAA President Explains Why Tailteann Cup Won't Be All-Ireland Curtain Raiser