This year is the 50th anniversary of the PwC All-Stars. To mark the milestone, we've convened two expert panels and given them the unenviable task of picking their 15 for 50 - the All-Star team of the All-Stars!

You can watch their team selection discussion in full here.

John O'Mahony: Cluxton is the king of goalkeepers. The kickout, the winning free in 2011, and the actual shot-stopping. He had everything really.

Peter Canavan: Páidi's record in terms of man-marking surpasses anyone. He was always able to come forward and lead the charge. He was a footballer, a leader, he had a bit of grit and devilment in him.

Peter Canavan: He was a brilliant reader of the game. I played with him for the international rules. The few times we came up against really good Aussie teams, nobody got the better of Seamus Moynihan. A pure footballer.

Oisín McConville: I marked him a couple of times, and I always say that he was the toughest opponent I ever had. I was always told how strong he was physically, especially upper body. I was told how good a reader of the game he was, but no one told me how quick he was! He was just the full package, and he could play ball.

Oisín McConville: Uncompromising. Somebody who could stop, but could also play ball, and hurt you going the other way. Hard as nails.

Peter Canavan: Himself and Jack McCaffrey are the best wing half-backs that the game has ever seen.

Oisín McConville: He was a huge leader. He had everything as a footballer. I've never met anybody with more drive. He led by his actions as much as what he said. When he said something, he was able to back it up. Without him, we never would have won an All-Ireland.

Peter Canavan: Would Dublin have won six-in-a-row without James McCarthy? Definitely not. He has been central to them. When the going gets tough, he's the one grabbing the game by the scruff of the neck.

Oisín McConville: He was a player ahead of his time. Of all the players who won All-Stars in that era, if Jack O'Shea came around now, he would fit seamlessly into the middle of the field for anybody. What Kerry wouldn't do for him right now.

John O'Mahony: He's the Rolls Royce of modern midfielders. His interventions at vital times with scores, and the way he faded into positions to get those scores [has been incredible].

Last week we brought you the @PwCIreland All-Stars "15 for 50" hurling XV, this week it's the gaelic football XV.

Ahead of the release of the full team on Friday, have a look at who Peter Canavan has in his half forward line.#PwCAllStars #15For50 pic.twitter.com/gpuKsvBgU1

Peter Canavan: Twice Player of the Year. Would Meath have won those All-Irelands without him? Absolutely not. He brought a cleverness, a thought process... he was able to win his own ball, set up the inside men time and time again with precision passes. He was a score taker, a finisher.

John O'Mahony: He was a game-changer in Cork. I think he's the only man who finished an All-Ireland with the cruciate injury, and didn't come off.

Peter Canavan: He was up and down the pitch. He set the mould for the modern wing half-forward in the 1980s. He was tackling, chasing, winning ball, fetching his own ball, and kicking massive points when Kerry most needed.

Oisín McConville: His poise, composure... The lad had everything, and he had the versatility to play at 11 as well.

John O'Mahony: The bigger the day, the more inspirational the display. His peripheral vision [was fantastic].

John O'Mahony: When Tyrone weren't winning All-Irelands, he was one of the great players in that era. He was able to mix it with big, physical players even thought he wasn't physically big himself. He might have been running at 100mph, but his ability to think when it came to placing shots was uncontested. 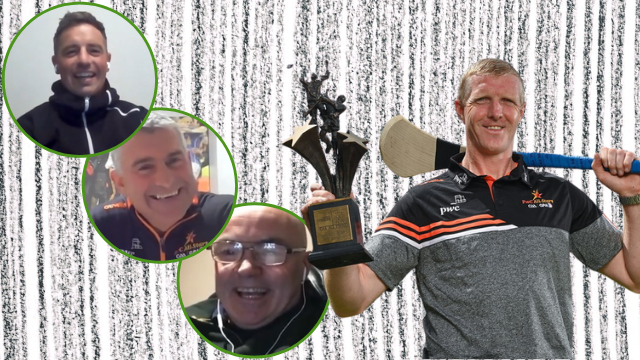