The extraordinary 20 Feet from Stardom was awarded the Academy Award for best documentary feature in 2013 after its stunning depiction of the often forgotten role of backing singers. It told the story of women like Merry Clayton, who received a phone call one Autumn night in 1696 from an English band requesting her immediate services in an LA studio. Her father was a Baptist minister and she had forged a love for singing through his choir. Heavily pregnant, Clayton agreed to partake. She needed the work.

Upon arrival, she was greeted by an English band, who asked her to sing a dark and high-pitched backing lyric for their new album that was to represent a world still grieving the assassinations of people like Martin Luther King and Robert F. Kennedy, the horrors of the Tet Offensive and the Prague Spring and the death of one of the bands founders, Brian Jones. She forcefully belted out the lyrics, so much so that her voice audibly strained mid-song. An apologetic and embarrassed Clayton turned to Keith Richards, Mick Jagger and the rest of the Rolling Stones and offered to sing again. They assured her that her unique version was perfect. You can still hear that voice crack in the apocalyptic hit ‘Gimme Shelter’ as Clayton sings ‘Rape, murder…’

20 feet from Stardom is the story of the people on the fringe. A significant yet often overlooked component of success. Those that add the structure, enhance the style, hone the craft. The names and faces we do not know but from whom we regularly benefit. In the case of Mayo vs Galway this Sunday in the Connacht Championship quarter-final, the men behind the men.

"The players took to him well. A few more critics clambered abroad, wondering aloud about the wisdom of appointing a 29-year-old rookie as team trainer. To me, he felt like the right man.

Paddy Tally had been a terrific influence in as trainer in 2003. His drills were cutting-edge. He identified with my fanatical devotion to training sessions, where the ball was king, and our relationship blossomed. "

They say a GAA manager is a thankless job. What does that make the GAA coach? This weekend two of the best in the game come face-to-face, or rather head-to-head. Will Galway bate Mayo? Not if Donie Buckley has anything to do with it. The Kerry man is a renowned name in GAA coaching spheres and almost unheard one outside of it. He is currently preparing Mayo for the sixth time, having been involved with Clare, Limerick and Kerry in the past.

In Galway, much has been made of the coach from the North who it seems has finally thought them how to tackle and defend. Tyrone’s Paddy Tally will patrol the sideline for the Tribesmen, hoping his meticulous programme and weekly sessions with the Galway footballers bear fruit in MacHale Park.

Tally and Buckley’s prestige is such that they have escaped the shadows traditionally reserved for the GAA trainer. To their great irritation, their influence has been publicly hailed on several occasions. Buckley hosts coaching conferences that consistently sell-out. Tally is routinely referenced in discussions about Galway’s development. Two remarkably similar men, hoping their knowledge will allow them to best the other this Sunday. 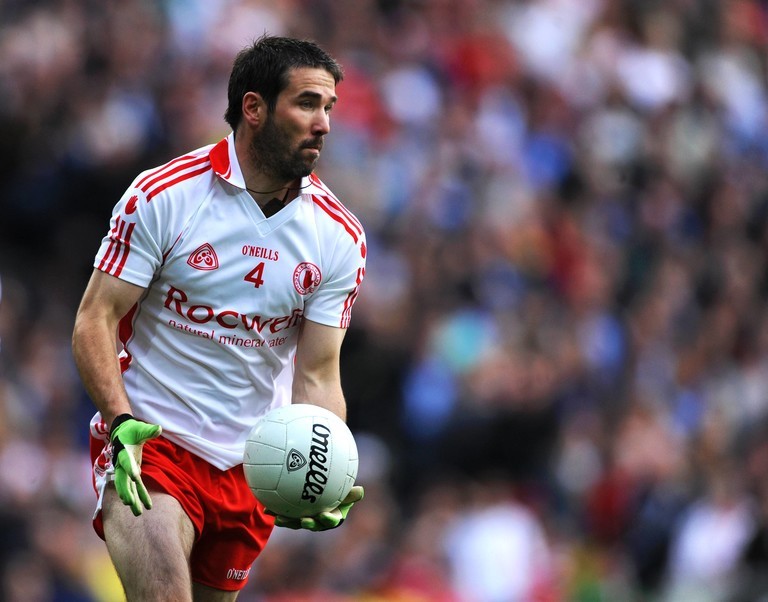 Ciaran Gourley is a three-time All-Ireland-winner with Tyrone. His career overlapped with Tally’s stint as Mickey Harte’s number two, which included the breakthrough year of 2003 as they claimed the first ever All-Ireland senior title in the Red Hand County’s history. However, Gourley’s relationship with the trainer goes back even beyond that and as such, he is the ideal companion to explain Tally’s ability.

I first started working with Paddy at St. Mary’s University. I was a student there and I think my first year he came into the coaching set up there, so he did. My first abiding memory of Paddy was the fact he was so full on, training was so powerful. He brought a real intensity to it. There was no periods of rest, absolutely no hanging about it. Other coaches, you could be two hours training with half an hour standing around, listening to him talking to you. You do a warm up, then cool down and then start training again. Paddy had none of that.

Tally has been involved with Tyrone, Down and Derry. Yet, throughout it all, his greatest achievement has been his work at St Mary’s College. An institution with a minute male population, Tally has overseen a drastic rise in their Sigerson Cup fortunes.

When I was a St. Marys, we weren’t one of the top teams. Paddy got the best out of that bunch of players that he could. We didn’t win anything at first but he brought relative success to us. Before I was in college they were knocked out of the Sigerson Cup in the first round a few seasons in a row. That was a big hurdle and he made sure we got over that. Then he was invited to the Tyrone set up and he phoned me to see what I thought. Obviously, I was involved with the Tyrone panel. This was something Mickey had mentioned to him. He rang and asked ' Do you think this is something I should be doing or how would I be received?' more or less. Just a question to see. I was really keen obviously. 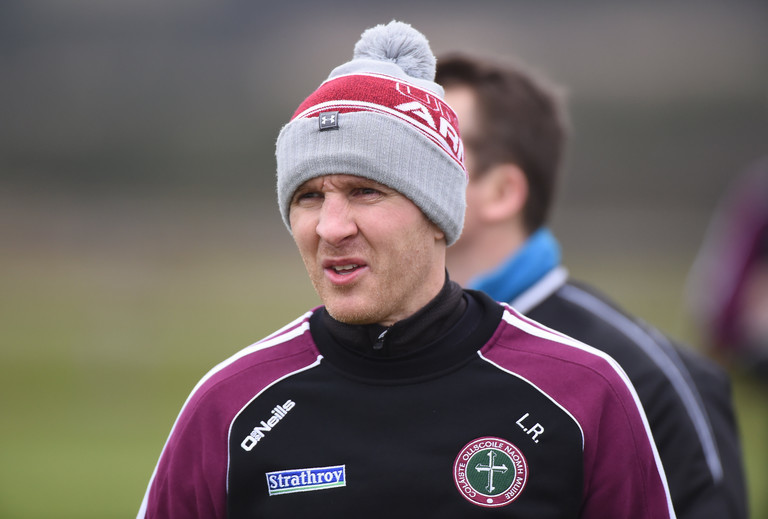 St. Mary's is a university with just 850 students, yet under Tally's stewardship, they still managed to shock red-hot favourites UCD in last year's Sigerson Cup final. It is a role Tally maintains to this day, continuing on spite of his involvement with Galway. As Gourley explains, the 2003 Tyrone panel quickly became enamoured with him.

The players received him very well. That was his remit. With Tyrone, he took the majority of the training sessions. He was doing a sports science masters in Jordanstown at the time so in terms of training methods and scientific application, he was at the forefront for us. It was a series of small minor things. He showed his science background by monitoring players in training. It was so innovative at the time, we're talking 15 years ago here.

Both Tally and Buckley pay close attention to other sports, in a bid to identify adoptable aspects. For Buckley, a regular hunting ground is Florida, in the United States where American football practices are observed and noted. Tally also looks abroad to see what he can incorporate into his regime, with Tyrone benefitting from the same tools utilised by Clive Woodward's World Cup-winning side from 2003.

He had a huge interest in other sports and talking about them. He was all into his sports science. I remember being called to Jordanstown for a VO2 Max test, which we had never come across before. He was doing it for two reasons, for our own fitness and for his own Masters as well!

In 2004, see in 2003 England won the Rugby World Cup. There was a device called a powerbreathe. It was a handheld device. You put it to your mouth and your nose. It was like a resisted breathing device. It made your lungs work hard to breathe at rest so you use it sitting or watching TV. You didn’t use this device for training or anything. It works on your lung capacity. It transfers to when you were struggling for a breath on the field. Even your resting breath was pushed to a limit. Paddy introduced that for us.

Tally left Tyrone in 2004 after a disagreement over the definition of his role with Mickey Harte. Gourley's experience of Tally saw him fulfill several different functions.

At Mary's, he had more influence in terms of what he said before a game. That enthusiasm and making sure you were in the right frame of mind. He wanted you hugely motivated for a game. At Tyrone it wasn’t the case, Mickey looked after what was said before or after a game and Paddy focused on the coaching aspects of things. People are well aware of the fall-out they had at the end of it.

The split was meticulously outlined by Harte in his autobiography: "The trainer trains the team, I pick it. Paddy seemed happy with this framework, but during the championship, I discovered he was talking to influential players outside of training sessions about certain team selections. That team selections fall to me. No one else. I stand and fall by those selections. Over the years I have consulted Fr. Gerard or Tony Donnelly, but the ultimate decision always lies with me. Paddy's role never prescribed any involvement in picking the team. He never had any say in those decisions. Now he was questioning them and our method of play." The relationship ended.

Galway's improvement cannot be solely credited to Tally. There is evidence of all their coaches influence in their current style. The physicality of the team vindicates Kevin Walsh's decision to draft in strength and conditioning coach Keith Carr last year. Walsh himself was once an international basketball player and had his side playing basketball during pre-season to develop systems which would soon be transformed to the field. It all contributes to a highly organised, intense and strong outfit that will bring war on Sunday. 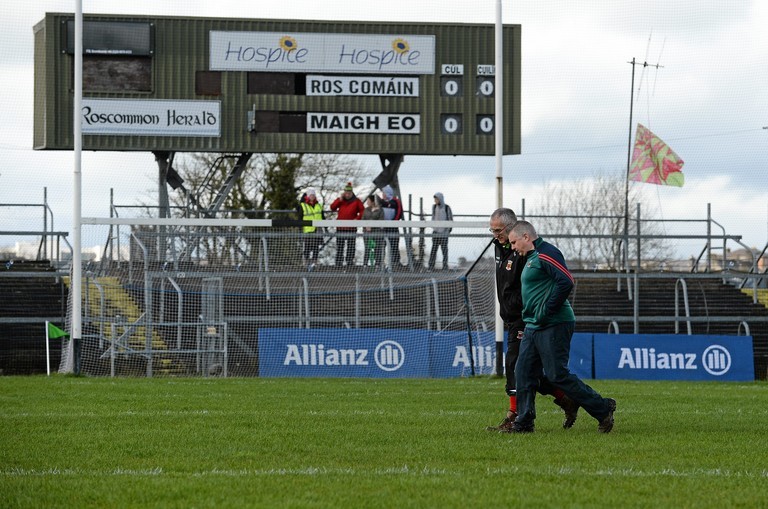 Donie Buckley is a retired civil engineer and brings the same attention to detail and precise planning required there to his training. Hailing from Castleisland, Buckley worked with the Kerry footballers until 2012 when he left just prior to the Munster championship, to the disappointment of many squad members.

In 2012, James Horan rang Buckley and encouraged him to join his coaching ticket for the following season. Several Mayo players have labeled him the best coach they have worked with. As Lee Keegan told balls.ie earlier this year, Buckley's influence should not be underestimated.

To be honest, he brings a whole game intelligence on how the game is played and how it should be played, that whole aspect. He has a great philosophy on how we should play football and I love the way he does think. Donie can play either defensively or offensively in the same manner.

For me as a defender he really works on our footwork and technique of tackle. Especially in the likes of Croke Park, that can influence a defence. Being able to stand your man up one-on-one in a lot of space is something that we hugely pride ourselves on. When you come up against the likes of Dublin and Kerry who have serious forwards, who can take you on one-on-one, that's where the benefit of having Donie Buckley is.

Donie has the offence and them primed to really take us on in training. We've to really work on our footwork, our hands, our technique and tackle. That's where Donie comes in, we see the benefits there. He's very good at that kind of stuff and you see the benefit of it in big games, it's very evident that our tackle is very effective.

For the majority, Sunday's Connacht Championship quarter-final is about Galway versus Mayo; a new dawn versus an accustomed entity. Damien Comer and Aidan O'Shea, Kevin Walsh and Stephen Rochford. Given the two previous meetings, these sides are set for an explosive triennial. Few will fixate on Buckley or Tally and deservedly so. Their contribution will have been long provided by then.

An orchestra is more than one artist and a football team is certainly more than the front line. In Mayo and Galway, the counties have assembled one of the best off-field teams operating right now, in the hope it spurs their on-field one to the biggest prize of them all.