I will never forget first-half injury time of the 2015 All-Ireland football final. Dublin were playing into the Canal End, where 16-year-old me was lucky enough to be seated in the upper tier. As the clock ticked past 35 minutes, Ciarán Kilkenny found a Dublin forward in space, who made a fool of Colm Cooper before slotting over for a point. Except it wasn't a forward. It was Philly McMahon.

I almost heard a chuckle or two in the crowd around me, as one of the greatest forwards of his generation was turned inside out by a corner-back for one of the best scores of the game.

The 2015 final may be better remembered for the swansong of Alan Brogan and the true coming-of-age of Brian Fenton, but the key Dublin player that day was, in all honesty, Philly.

The best and worst of Philly McMahon on the biggest stage

Colm Cooper had been one of the many scourges of Dublin football for the best part of a decade before he and Kerry were finally overcome in 2011. Perhaps the defining moment of the 16-year wait for an All-Ireland crown was Cooper's first-minute goal against Dublin in the 2009 quarter-final.

The capital city had been buzzing with optimism and hope that this could be the Dubs' year, but the Gooch took no time in making sure they firmly knew that it would not be their year. 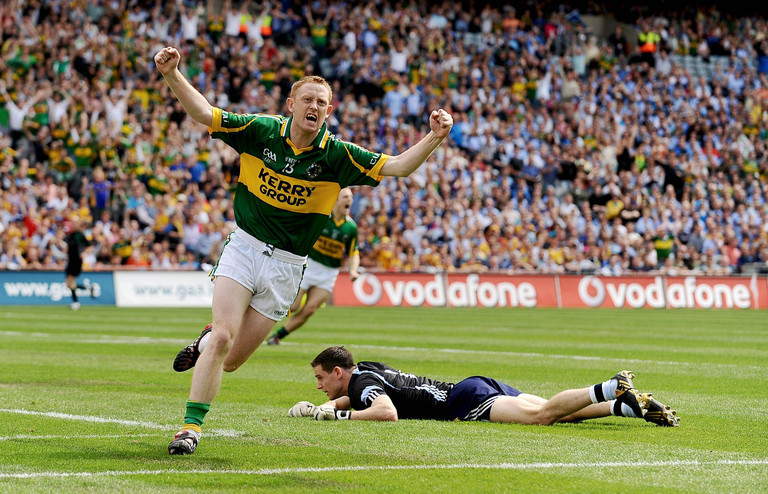 Fast forward to 2015, and the footballing landscape had changed somewhat. We find Colm Cooper in the twilight of his career, but still very much one of the most feared players in Ireland, and part of a Kerry team going for a second successive All-Ireland crown.

The task of containing Cooper and co. was the big question on everyone's lips in the buildup to the showdown between the Kingdom and the Dubs. Dublin had just about managed it in the 2011 final, and had snatched victory from the jaws of defeat against the same opposition in the 2013 semi, but Kerry had fought back with a vengeance to triumph in 2014.

This was a Dublin team that had had its lowest day of the Jim Gavin era the year before, being totally outclassed by Donegal in a disappointing semi-final performance. It was one of those "too close to call" games going in.

And the man tasked with marking Kerry's star man Cooper was Ballymun Kickhams fullback Philly McMahon. The Ballymun man had gotten 25 minutes of the 2011 showpiece, before establishing his place in the starting XV for the 2013 triumph against Mayo.

This, however, would be his biggest challenge yet. There were question marks over Cooper's fitness, with Dessie Dolan saying on RTÉ the week of the game that the Gooch's cruciate injury had left him as a lesser player. Even McMahon himself felt apprehensive about Cooper's abilities.

Speaking to Balls in the aftermath of Cooper's retirement in 2017, McMahon questioned whether the Gooch was past his best by the time they faced each other in 2015, saying he would have preferred the opportunity to mark him in his prime.

Whether or not Cooper was past his peak, he was still one of the best forwards in the country in a mighty Kerry team, and McMahon's job on him in the '15 final was still destined to be a tall order.

In the end, McMahon didn't just dampen Cooper's influence - he made him a non-factor in the game.

It was a dire afternoon in Croke Park, with the rain pouring down in an almost biblical manner. The game was stop-start, and scores were at a premium. Maybe that played a factor, maybe Cooper's cruciate issues also did.

But one thing that was not to be questioned was the fact that Cooper had next to no impact on the game, with McMahon playing out of his skin to contain the Dr Crokes forward.

In fact, the most memorable contribution Cooper had to the game was diving in a desperate attempt to block McMahon's point at the end of the first half, which helped put Dublin over a score clear at half-time.

(Skip to 38:33 in the video below to see Philly McMahon's point)

At the end of the game, the score card read: Philly McMahon (0-01), Colm Cooper (0-00). The greatest forward of his generation had been shackled and outscored by the Kickhams fullback. McMahon had a knack for going on mazy runs up the pitch, but it was rare he would convert.

To do so in such style in an All-Ireland final - that Dublin eventually won - was the pinnacle of McMahon's time in blue. 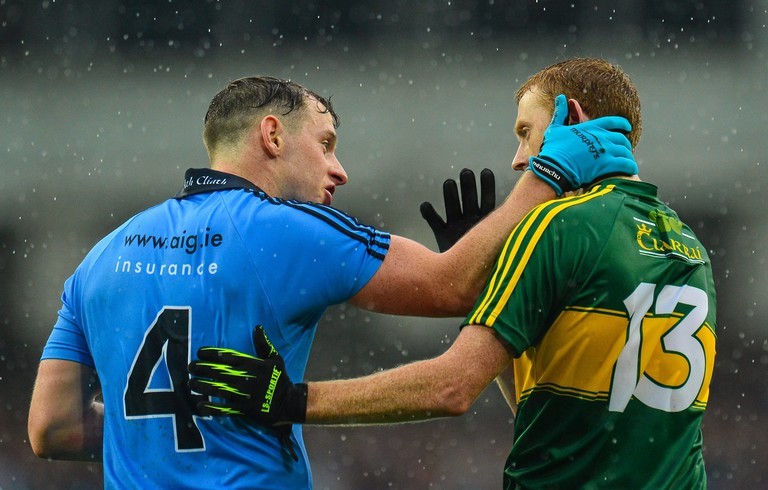 In true Philly McMahon style, however, there was a blot on his copybook. And, in all seriousness, the word "blot" doesn't quite do it justice.

In the dying moments of the game, Kerry legend Kieran Donaghy was brought off the bench in an attempt to salvage something for the Kingdom. Dublin led by three in injury time, and the game sat on a knife edge.

As the game entered injury time, Philly McMahon was involved in a tussle with Donaghy, after which both spoke to the referee. McMahon was unhappy with persistent contact off the ball, but the accusation from Donaghy was far worse, as he claimed the Dub had gouged his eye to referee David Coldrick. 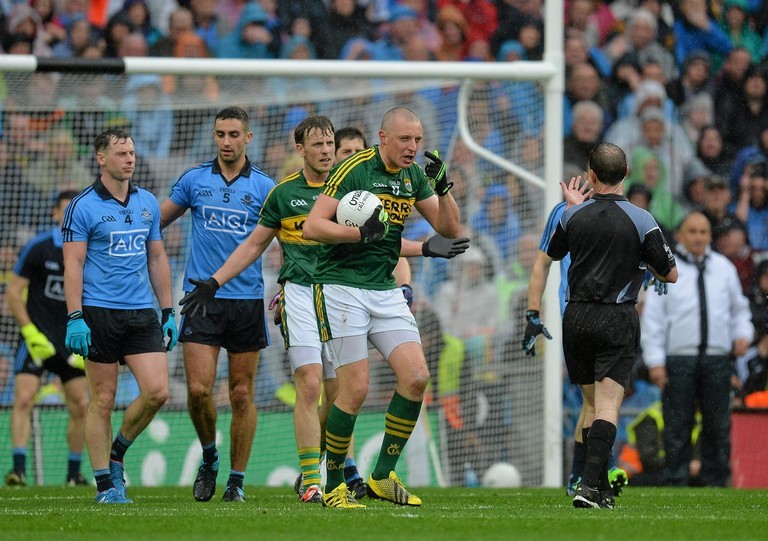 The verdict ultimately game from the GAA, with McMahon found guilty and banned for the first game of the 2016 league.

Video footage from the time shows in no uncertain terms that the Dublin man did indeed make contact with Donaghy's eye, and it doesn't look pretty.

To his credit, Donaghy was gracious and sporting in the aftermath of the incident, insisting that he did not feel that McMahon had meant to make contact with his eye. He even argued that the one game ban was a harsh punishment. Donaghy said in an interview with Radio Kerry at the time:

It's obviously something you'd like to stay away from and I don't think he meant it.

A hop ball was the end result.

Regardless of Donaghy's comments, it was a stain on an otherwise flawless afternoon for Philly McMahon and Dublin.

That is, perhaps, the great sadness of McMahon's career in blue. For all of his defensive brilliance (and he really does not get enough credit for just how much he has done for Dublin), there will always be the stain of the madness of 2015.

The fact McMahon felt the need to make such a move with Donaghy already on the ground is, to be frank, a wild choice. He was a player who played the game on the edge and, sometimes, that red (or blue) mist got the better of him.

Nonetheless, he is one of those players who you simply cannot separate from all of Dublin's success in the 2010s. An eight-time All-Ireland winner, involved in every final of the famous six-in-a-row, with a good social conscience and heart to go with it all.

Of the team that played in the 2011 football final and kicked off the era of Dublin dominance, only James McCarthy and Michael Fitzsimons now remain.

His career in blue may be over, but the impact of Philly McMahon on Dublin football won't be forgotten. Certainly not by Colm Cooper, anyway. 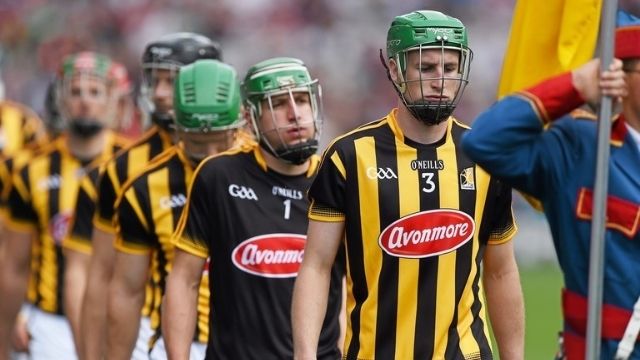