30 Years After The Greatest Sigerson Cup Tragedy, The Tierneys Have Come Full Circle

'UCG opened the game with an extremely strong wind in their favour but failed to use the conditions to their advantage and only had a one-point lead at half-time. Matt Tierney, UCG's full-forward, opened the scoring with a point after three minutes...'

Jaysus, ya it was great. It was a very windy day, we won the toss and we went with the wind. I remember it differently. I thought it was straight from the throw-in. The ball came clean over the full-back. I was clean through but I hadn’t played much in the forwards up to that. When I was a minor, I was in goal all the time. I was sub goalie for the Galway minors but then started to play a bit for college outfield, first for the freshers and then I was in full forward. So, I hadn't much experience but it was a great goal chance. I said I'd tap it over the bar and I'd get plenty more with the wind we had. I think I only got one more ball after that in the whole game. That’s one vivid memory, I'd love to have it over again. I'd definitely have gone for a goal...

When University College Cork faced University College Galway in the Sigerson Cup final, it had all the hallmarks of a superb GAA occasion. Maurice Fitzgerald in the half-forward line, Mícheál Ó Muircheartaigh on commentary. UCG were in pursuit of their first Sigerson Cup since the two-in-a-row of 1884. For many of them, that was their last chance before graduation.

Matt Tierney loves Gaelic football. Keeping up with his expertise is a challenge. Who will win the club championship? Which Galway hurlers would start for the footballers? When's the last time you saw Scotstown play?

Desire that is infectious. A knowledge that strikes as unfathomable. A memory that remains unblemished.

After success as a squad member in 84', Matt was eager to get his hands on a second Sigerson medal and kickstart his fledging intercounty career.

Having played for the Galway minors as a goalkeeper, Matt graduated out the field and spent three years with the Galway U21s. Such a sudden change is naturally troubling at first but he held his own and developed as a footballer. As is so often the case, his greatest hindrance was himself.

If I got my time over again, I would love to play with confidence from 19 on. I don’t know if you read Jackie Tyrell’s book. There was a bit where he was captain of an All-Ireland team, but he still didn’t know if he was good enough… the doubt. That was me now. The only person who didn’t know if I was good enough to play for Galway was me.

Consider him at this moment. The seventh of March 1988. Starting for his university, developing confidence in himself and on the verge of a run with the Galway senior footballers. Playing alongside his college friends and almost finished an engineering degree. Matt's last game of football.

Alan Mulholland was introduced shortly before half-time. An injury in a league game for Galway prevented him from starting, but it soon became clear his aerial ability was required around in the middle of the field. Yet when he recalls it now, the game is a total insignificance to him.

We stayed up that night after losing that match in Maynooth. We were driving home the next day, all in cars. I was back already with the boys. Kevin O'Hanlon was driving one car and Matt was sitting in the passenger seat. They crashed at the roundabout there at the Huntsman. They were fucking nearly home... We were on our way to the Hole in the Wall, we were actually waiting for them. Then they crashed and Matt never walked again.

Traffic coming into the city sees lanes merge on that road. An overzealous car cut across them and the car carrying five members of the team crashed.

Galway is a small city with a close-knit University. That team comprised of a close group of 21-year-olds ill-equipped to deal with a blow like this. Their friend was injured and they didn't know how to help. But they did know football.

Mícheál Ó Muircheartaigh was there commentating on the game and he was pointing out Matt, he was really impressed with him. He played really well that day. The following week he was up in Dún Laoghaire, a shocking place to be, that spinal injury place. We didn't know what to do, so we went up to RTE and rang the doorbell because Matt loved football and obviously Mícheál Ó Muircheartaigh. We told him the story and he told them he was off, so we put him in the car and brought him over to Dún Laoghaire to visit Matt.

Matt was what, 21 or 22? Playing so well, he was about to get a run for Galway and fecking... it all finished there for him.

Ó Muircheartaigh was one of several GAA figures who came to visit. Matt recalls the visit vividly. He even remembers the gift.

He was a very nice man. He brought me a book, in Irish, about the history of GAA up to 1884. the GAA hadn’t even been formed! He gave it to me and he signed it. Ah, it was lovely.

Here's the thing about Matt Tierney. Over the course of three separate conversations, he repeatedly uses one phrase: That's the way it goes. Life moves on and that's what he did. He returned to university and finished his course. The next step was marriage, and four sons soon followed. There are numerous platitudes that can be applied to the man’s fortitude and character, but he doesn’t care for them. Matt does not want to be told he is a testament to the outer limits of human survival. He has an admirable willingness to have an open conversation, all the better if football is at the heart of it.

The man speaks with an enthusiasm and an authenticity. There is never any self-pity. He reserves that for his former team-mates.

Poor John Joyce.. he was on that team too. He was in with Galway at the time, then was in an accident. He died. It was a huge blow for Salthill and Galway GAA.

In 1997, John Joyce passed away at the age of 29 in an accident while on holidays. He had played centre-forward on that Sigerson team.

Padraig Kelly, I still think about it. He was just so good. He should have won player of the tournament. His son is playing now with NUIG and Galway. It’s awful sad that he won’t get to see him play.

When I was going from the hospital to the helicopter, the Wednesday after that for rehab. It was a shock. Padraig Kelly stayed around and walked out with my mother... I won’t forget it.

Pádraig 'Dandy' Kelly passed away suddenly at the age 40 in 2002. He played in midfield for UCG in the Sigerson Cup. His son, Sean, plays for Galway and NUIG's Sigerson team now. 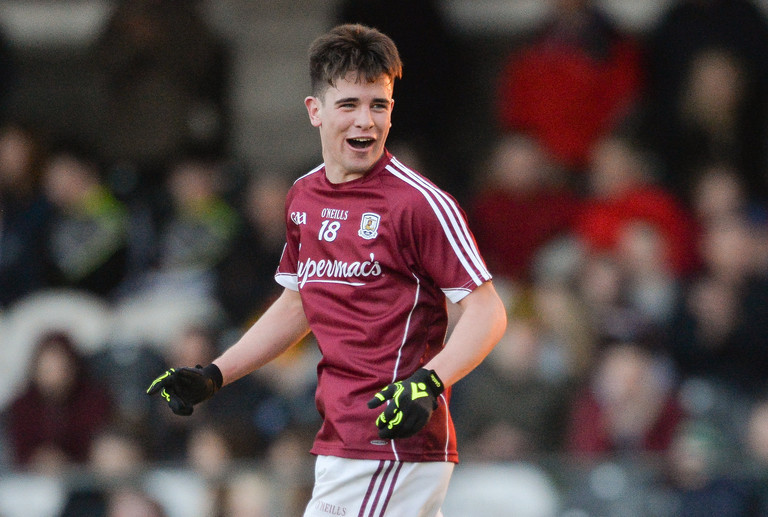 Kelly will start today for NUIG in the Sigerson Cup final against UCD. Matt is well familiar with him, having traveled the length and breadth of the country watching him in action for Galway and NUIG.

I’ve said this to a number of people. Sean Kelly runs the exact same way as his father. And he can go all day long and his father could run all day long. Padraig played midfield that time, in 84’. I don’t know how he did, but he ran miles. Sean has the same kind of high-knee lift. It’s just... yeah. I’d see him running down in front of me and it comes back, exactly like him.

Matt knows plenty about the opposition too, his thirst for attending games ensuring he has laid eyes on the vast majority of footballers within Galway and beyond.

I was up to there to Monaghan for three county finals. My father-in-law is mad for Scotstown, so I do head when the county final is on and watch it. That Conor McCarthy, who plays for UCD, I've seen him for his club. He is a class player.

However, there is one player who will demand most of Matt's attention come Saturday's final. At wing-forward is his son, Enda. A superb club footballer with Oughterard, finding his feet with the Galway footballers and now, 30 years after his father played in it, lining out in the Sigerson Cup final.

I think he's a very similar player. Long and lean, when I was that age it was the same, it is in our genes. He's stronger than he looks and he's still very lean. I'm absolutely, just so proud of all of them. I’ve four lads, I love football and now I just love watching football. He is very gifted at it. You know, it is a great sense of pride when you're watching. Even more so, just how they conduct themselves. 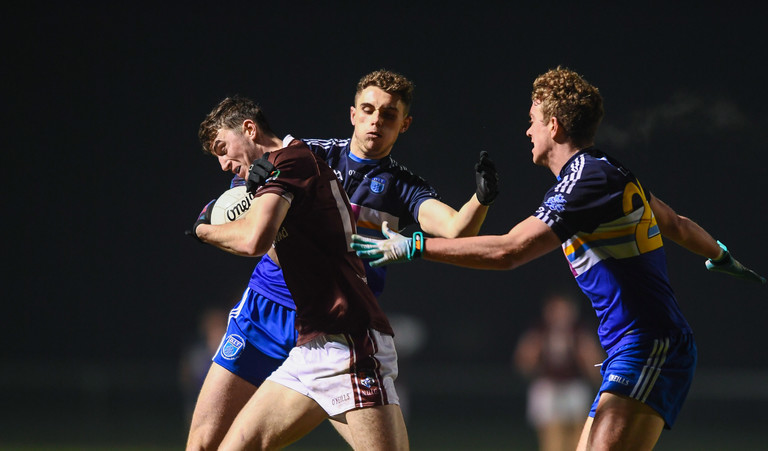 Matt Tierney loves football. It is a part of him, and as he demonstrates, many highly enjoyable hours could be spent conversing about it. This week has been defined by the building excitement for the final after winning the semi on Wednesday. Matt made sure to keep his oldest son, who is abroad, in the loop and is glad he'll get the chance to watch the final come Saturday.

You get the sense regrets are not for Matt. Although, you would forgive him for dwelling on one, particularly given the week that's in it.

It was great to have played in the Sigerson Cup, I loved it. I’d love to get a couple of things over again but sure you only get one chance on it. But if I had one, I’d love to let fly with the left foot and get that goal. Eamon O’Keefe was flying by on the left side, I could've even popped it to him. That's the one, I could have shot for a goal but I said 'no get a point early.' That was the wrong decision. I’d change that!

GAA
3 weeks ago
By Balls Team
Community, Oppression, And Drive To Succeed: What Makes Ulster Football So Special
5