British army thievery, the demands of the television age, superstition, simple forgetfulness. Inter-county sides have changed their colours for a variety of reasons. 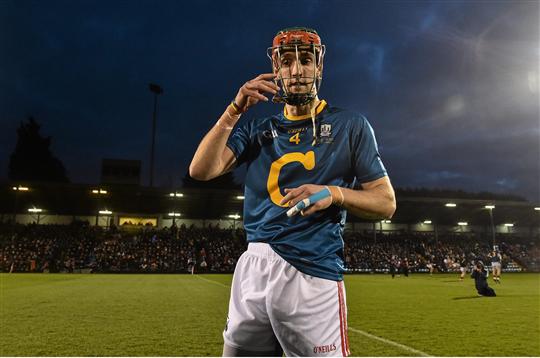 Cork's original blue and yellow jerseys were a victim of the War of Independence. It transpires that Cork only wear red thanks to the nabbing fingers of the British army.

In 1919, the offices of the Cork county board in Cook Street were raided and the original blue and yellow jerseys were nabbed.

Cork merely adopted the jerseys of the Fr O'Leary Total Abstinence Hall side, who had recently amalgamated with St. Finbarr's.

In the style of the time, Cork played Tipp in the 1919 Munster championship with these red jerseys with 'TA' branded across the front.

No county team has advertised 'total abstinence' on their jerseys since those days.

In the early 1970s, despite not having played on television for several years, the Dubs were prompted to re-think their ensemble on the advice of the television people. Dublin county board chairman Jimmy Gray heard if off Mick Dunne the whole time.

Mick Dunne used to always say that Dublin, with the light blue and the white shorts, is not suitable for television.

Glasnevin born Paula Lee, the secretary to the secretary of the Dublin county board, felt that the Dubs would look better in blue and navy.

Gray told her to sketch her idea for a new jersey.

I started sketching out different gear with navy shorts, a stronger blue and the navy collar.

She brought it to Seamus Dalton of O'Neills. The conservatives on the county board were instinctively outraged by the idea. Jimmy Gray had the onerous task of informing them.

But it caused ructions at the county board. Breaking with tradition. Just through an oversight I never thought of telling them that the kit was going to be changed. There was war.

In the early days of the GAA, when teams switched colours willy-nilly, usually depending on who happened to be county champions that year, Kerry had already nailed down red and green as their colours.

In 1903, the travelled east to play a tournament in Dungarvan and inexplicably left the green and red jerseys at home. Someone cocked up. This was a rather less mortifying faux pas in 1903 than it would be today.

They simply borrowed the green and gold kit off local club Kilrossanty and played so well that they decided to adopt the colours, like Goran Ivanisevic demanding the tennis ball he had just hit an ace with.

They didn't so much change their colours as alter their prominence in the kit. Throughout their history, Donegal wore predominantly green jerseys with a yellow sleeve.

As late as the 1992 Ulster Final, they wore   predominantly green jerseys with a yellow strip for the win over Derry.

For whatever reason, they decided they wanted something different in Croke Park, wearing a largely yellow strip with green sleeves. This wasn't their away jersey.

Thereafter, it became their de-facto kit.

The primary theory here is that they changed to gold and green because there was a kit clash with Mayo in the All-Ireland semi-final, although Mayo wore their away jersey that day too.

When Donegal beat Mayo, their first All-Ireland semi-final win in five attempts, they decided it was lucky and stuck with it for the final. 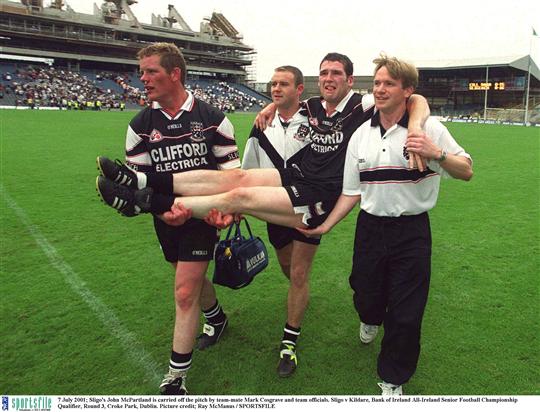 Initially, Sligo wore black before switching to white with a black 'trim' in the middle of the twentieth century. This remained the case through their years of glory (well, year of glory in 1975) and their years mired in the wilderness (1976-1996).

During the first year of the qualifiers, they were matched up with Kildare in Round 3. It was their first match in Croker for some time. They were forced to adopt their away jersey, a largely black strip (essentially an inversion of the colours of their home strip).

Kildare were reigning Leinster champions and aspired towards All-Irelands. However, it soon became apparent they were on the slide. Sligo won by a point and decided these new jerseys were for keeps. Since then, the black strip has become the de-facto home jersey.

Armagh used to wear the same colours as Kilkenny. Though the GAA website tells us the story, they do not note that these are also the Crossmaglen Rangers colours. We suspect that could be what was going on there.

In 1926, before they were to play in a junior All-Ireland final against the Dubs, the Dominican nuns of Omeath in Louth (don't know why?) knitted them some orange and white kit.

It would be shameful to ignore such a gift from these devout and holy women and they've dutifully worn them since.

Read more: Our Kneejerk Reaction To The Weekend's GAA - Defence Is Dead, Long Live The Blanket