One of the amazing stories that pre-empted Limerick's All-Ireland hurling final win, 98-year-old John Hunt was on hand to night to take all the limelight away from John Kiely and Declan Hannon.

A Limerick-born Chicagoan, Hunt travelled from his American home for Limerick's epic final with Galway on Sunday August 19.

Thankfully, the result went his and Limerick's way, and, as the Liam MacCarthy cup was paraded on the Late Late Show tonight, Hunt finally got to have his time with the trophy. 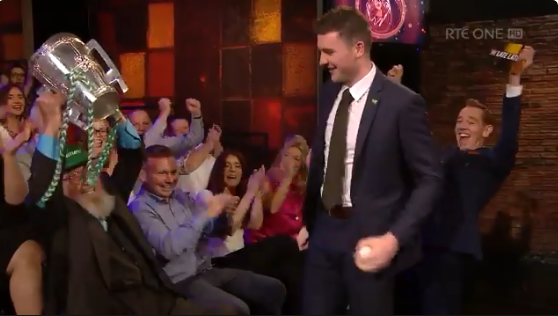 I saw Limerick playing in the [1936 All-Ireland final]. I saw Mick Mackey going down that field with the sliotar in one hand and the hurl in the other, and the ref never saw him from one end of the field to the other.

When the host Ryan Tubridy tried to turn attention toward what had brought Hunt to Chicago, the Limerick man was having none of it; "You're asking me what I'm doing in Chicago, I'm here with the Limerick crowd tonight!"

Bringing the smiles and cheers out from the audience, Hunt then got to do something he never did before; lift the Liam MacCarthy cup.

This Limerick man, long emigrated to Chicago, is 98 years old. He saw the Treaty win the All-Ireland in 1936. He saw them win it at Croke Park in 2018. He had never held aloft Liam MacCarthy. Until now... #RTEgaa pic.twitter.com/WjNb42SPcZ

Asked what the win had meant to him, Hunt surmised; "If St. Peter gets me at the gate, I couldn't be happier."