There Is Hard Work, And Then There Is What Adrian Mullen Did During Semi-Final Win

In June, Adrian Mullen started for Kilkenny against Galway for what was just his second big senior Championship game. Fight and fury in Nowlan Park. Chances were at a premium but two minutes before half-time, the teen got one and fired off a shot at goal.

It went wide. The next thing the Ballyhale Shamrocks club man knew, substitute Richie Hogan was up and stripped. It was time to come ashore. His day was done.

He'd been Club Hurler of the Year but the jump to Brian Cody's seniors is a tall order. Yet he returned to the team a week later and hit 1-3 against Wexford. He followed it up with 0-3 in the Leinster final. 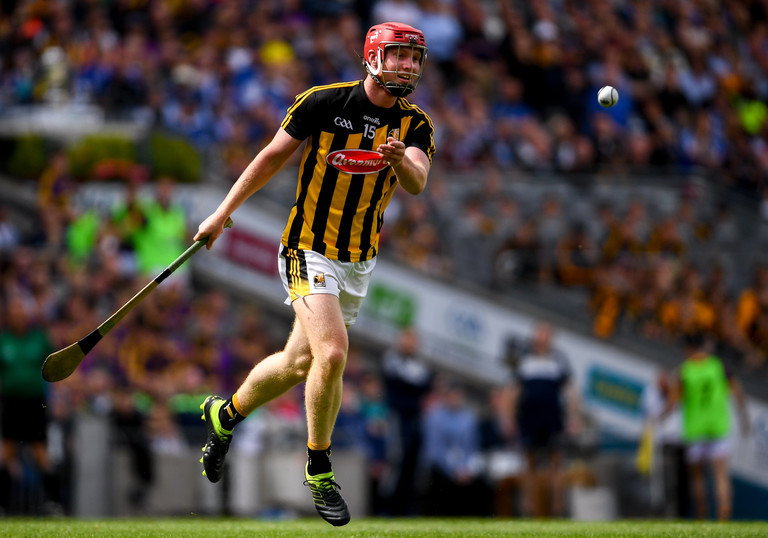 It was a star performance from the 19-year-old in Saturday's semi-final with another impressive total of 0-4, but that's merely the icing on the cake for Adrian Mullen.

His mother is Monica Fennelly, of the Ballyhale dynasty. As a nine-year-old, he would watch first cousin Michael captain Kilkenny to an All-Ireland.

His father, Declan Mullen, was a talented Kilkenny underage hurler in his own right. A prominent member of the 1984 minor All-Ireland finalists and later, after a transfer from James Stephens in the mid-'90s, a part of the '97 Ballyhale team that secured promotion from intermediate to senior. Add Henry Shefflin into the mix as his club manager and you have a powerful potion.

The distance from his short walk-off in Nowlan Park that June afternoon to a leading light in Croke Park on All-Ireland semi-final day, as well as being a shoo-in for young player of the year and a possible All-Star,  is a remarkable one. Two months on the Cody programme proved crucial.

For Limerick on Saturday, it was a case of death by a thousand cuts. Overwashed in a sea of full-bodied tackles and all-encompassing challenges. In the race to reinstall their kingdom, Kilkenny built their castle brick by brick. Every inch gained was an inch earned.

Brian Cody said as much after the game. The expectation placed on his players is long-established.

It is a question of all over the field. Every individual has to work, perform and give everything. You will make mistakes, do this or that but as long as you are totally honest all through the field and all through the game, you are going to pay your way.

Ballyhale club man Patrick O'Sullivan has an encyclopedic knowledge of both his club and the sport. He managed Mullen at U14 at 2010 2011 and, as he tells Balls.ie, knew even then what was to come. 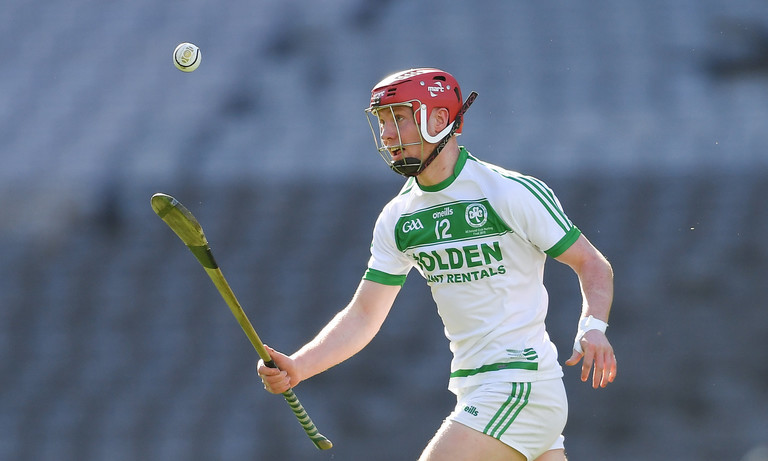 "Numbers are tight for a rural club like Ballyhale at that level. Half your panel will be in secondary school, but the other half will be primary school kids from U11 and U12. Normally, even though it is legal, you wouldn't use U11s. But we felt we couldn't ignore Adrian in 2010. So, he was a ten-year-old left corner-back for us.

"He had fantastic grit and determination even then. He played mostly as a back all the way up until he went to St Kieran's College. He wouldn't have been particularly big for his age but he was clever. He was old beyond his years really. As a defender, he knew the dark arts of playing in the backs without anyone having to tell him. He just had that natural aggressiveness, but always a terrific hurler."

A five-minute passage early in the first half showed precisely what makes Kilkenny great and why Adrian Mullen will be.

It started in the seventh minute.

Kilkenny win a sideline. In the centre of the field, All-Star Richie English has a tight hold of Mullen. 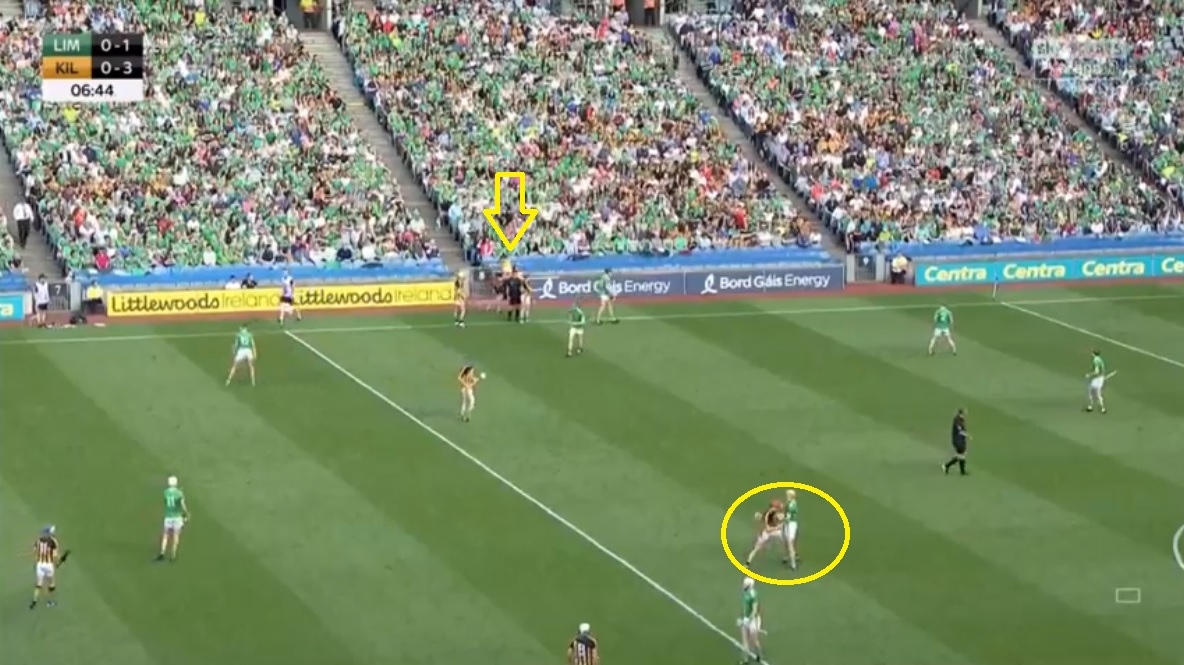 Mullen stands his ground and pushes English off him. 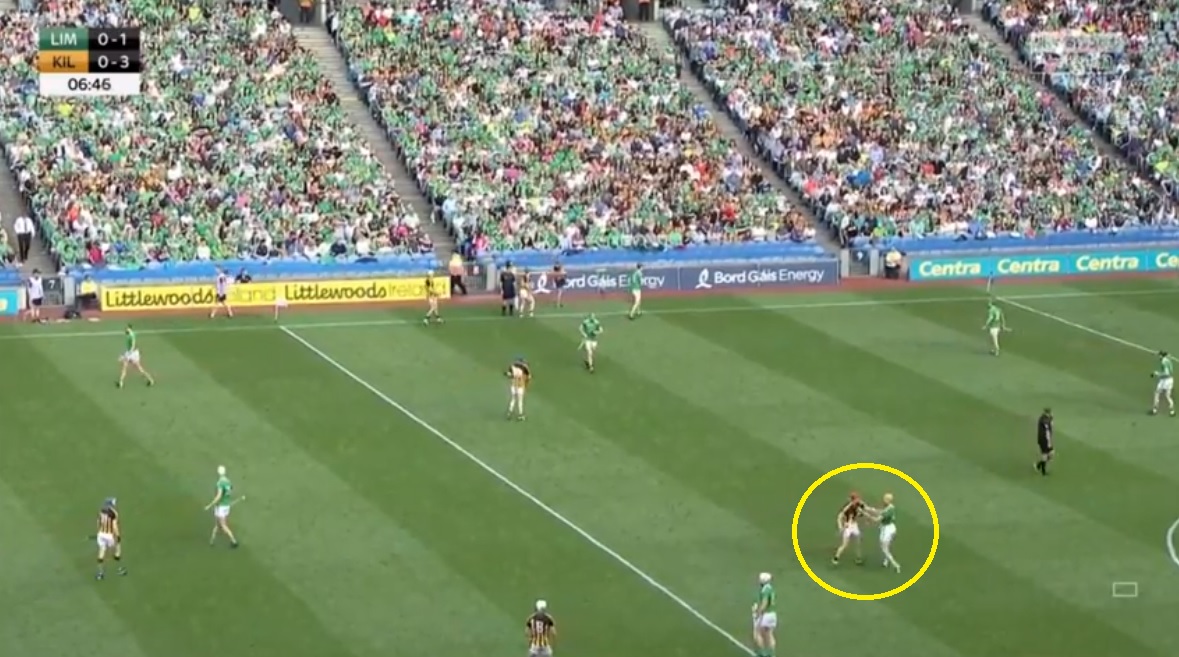 Kilkenny's forwards begin to move while Richie Hogan sets up the sideline. The space is in behind, so Mullen moves one way before breaking the other. 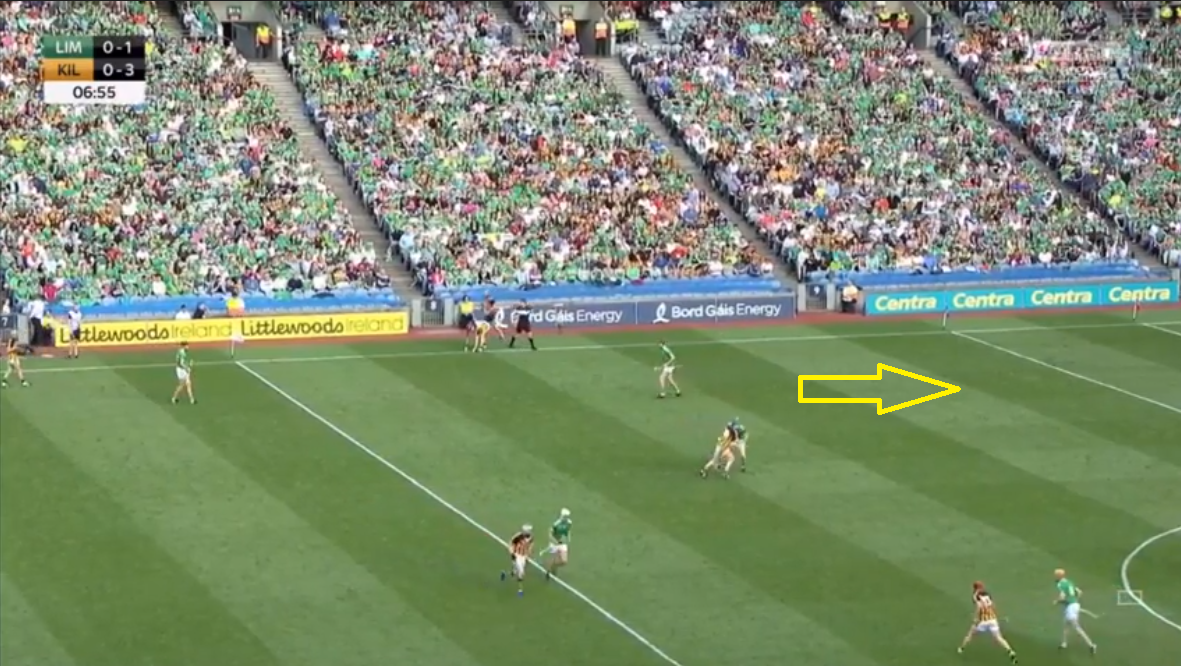 Hogan stands to look for an option. 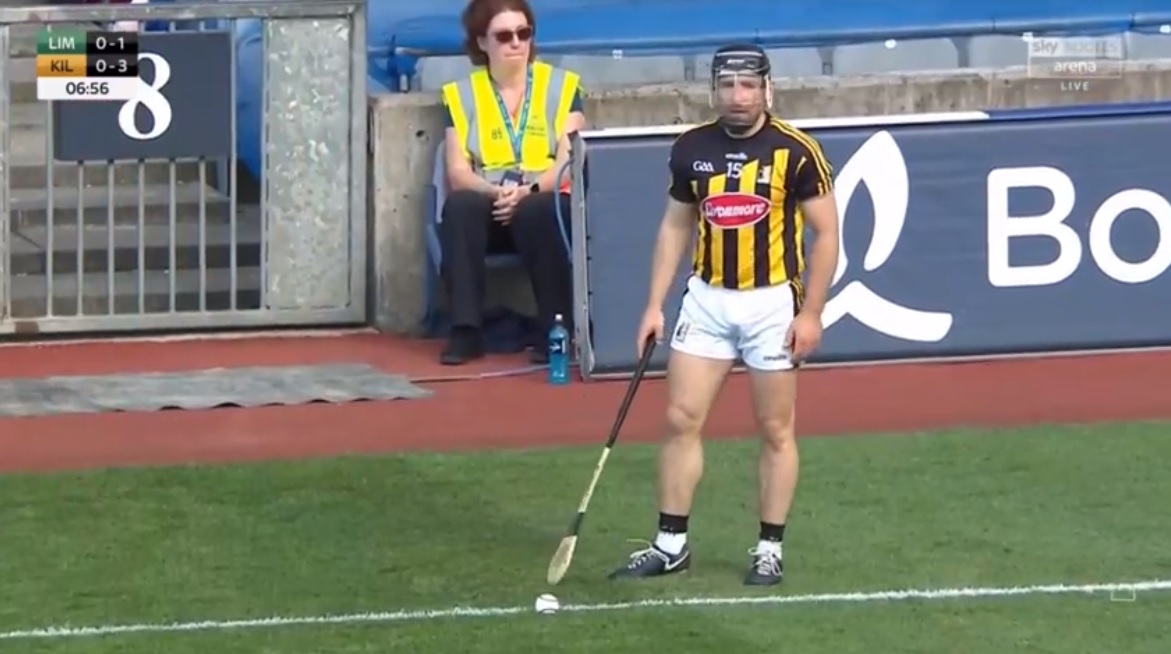 Mullen gets down the line, wins his ball and feeds it back outside. 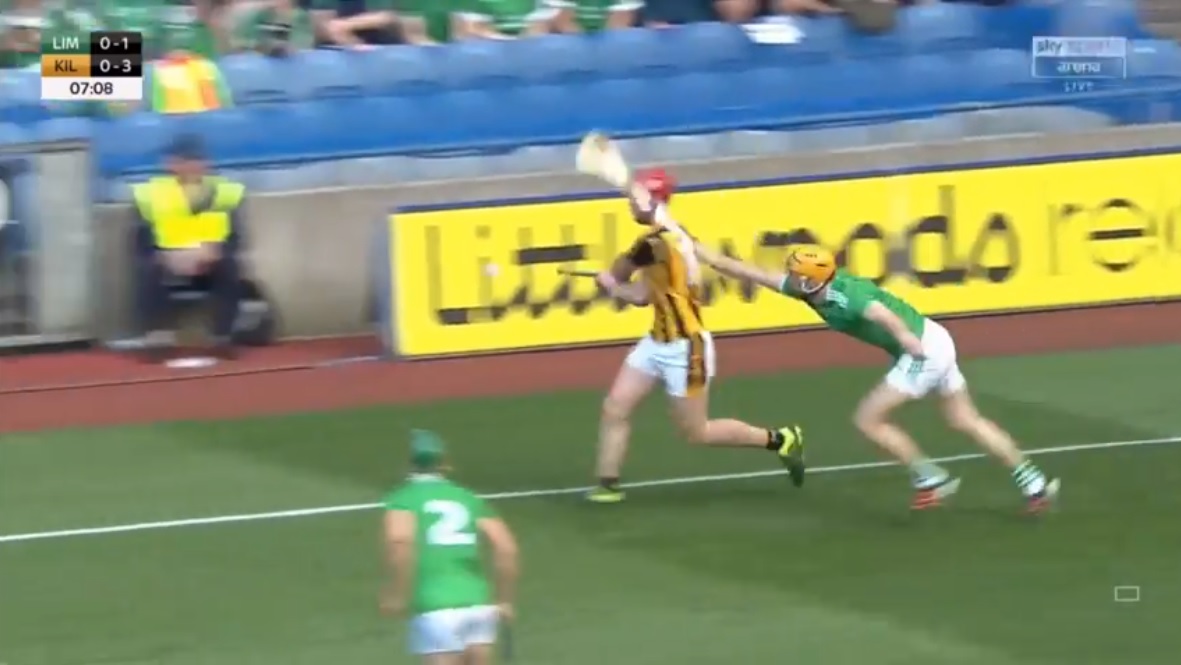 TJ Reid wins a sideline closer to goal and puts it over the bar. 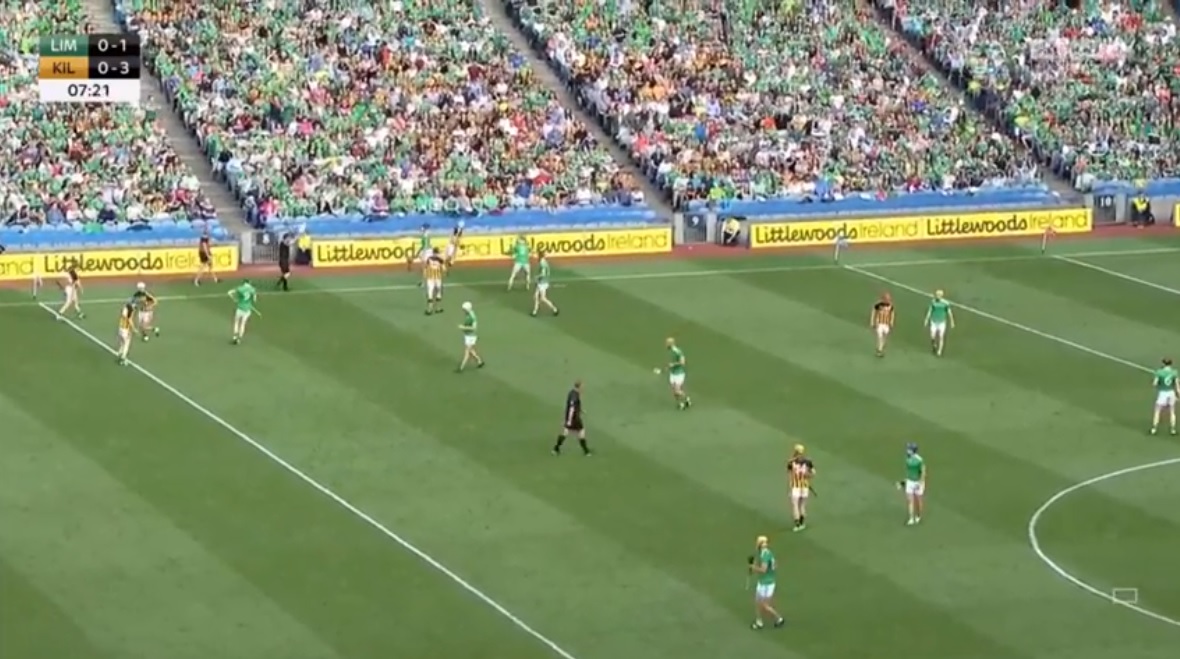 A tussle with a sticky cornerback followed by a lunge-busting sprint to the corner and delicate pass back out the field. Setting the foundation for Reid to hit a score and Kilkenny to make a fraction closer to the final two.

From that score, Limerick went long and Aaron Gillane shot wide. Kilkenny responded with a puck-out right on top of Walter Walsh who fired over a point and Nickie Quaid then has a puck-out.

Mullen, standing inside the '45, splits the wing and corner-back before working back to the '65. 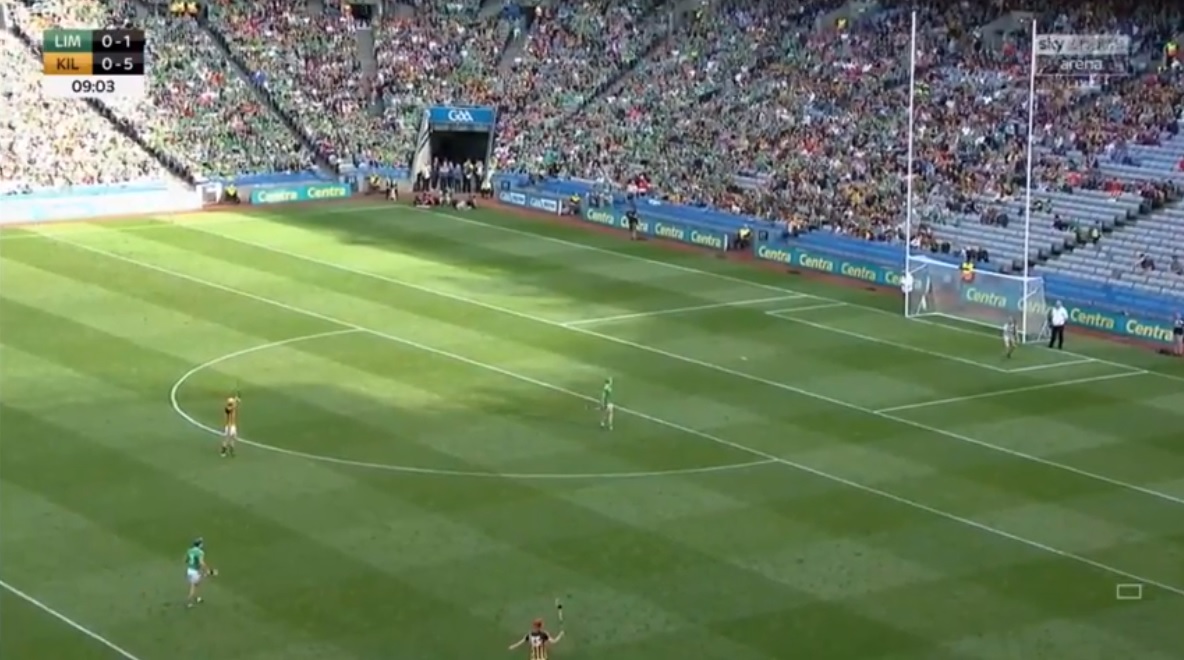 Kilkenny swarm, Mullen gets in close, wins possession, carries back inside the '45 and fires over a superb score.

That score was particularly sweet for O'Sullivan.

Adrian is an orthodox right-handed hurler, right hand on top, but always favoured his backhand side, his left. Even now when he hits frees, he used to take them for St Kierans, he took them off his left side. There seems to be a tradition of that in Kilkenny. Tommy Walsh was the same.

That stroke was off his right-hand side on the sideline. That's a tribute to the work he has done. He was left-side orientated as a youngster. For Kilkenny and Ballyhale people that was a real pleasure. It shows the work he has put into his game.

A marriage of will and skill. "It was just the doggedness, the work-rate, the hooks, the blocks, the flicks, the catches. It was unbelievable work-rate from all the players," declared Man of the Match TJ Reid post-game. His half-forward partners embodied that. 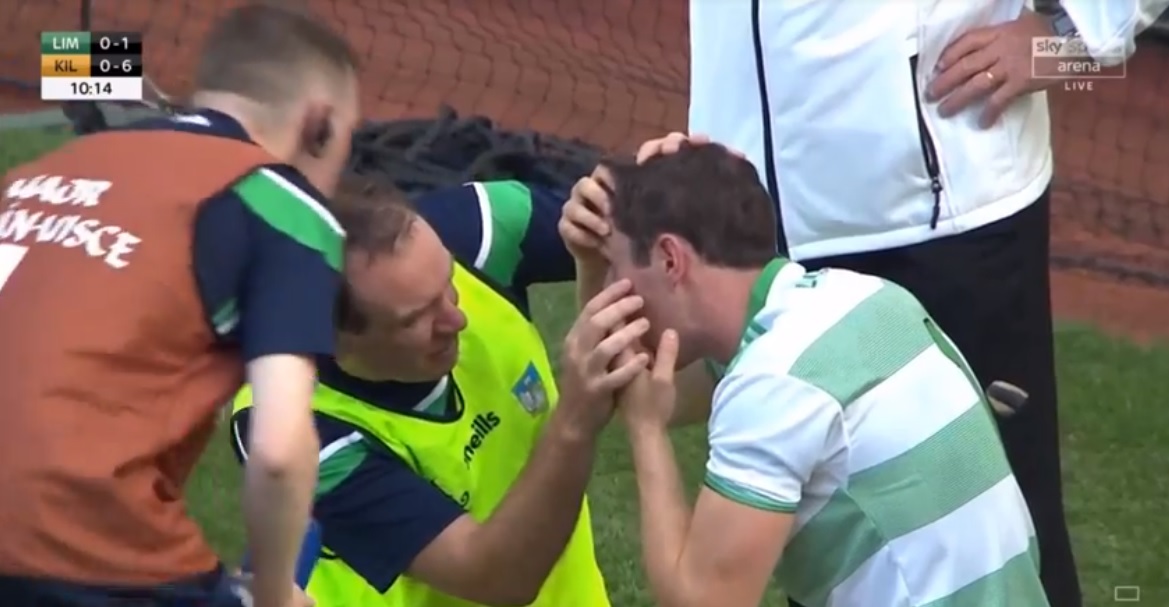 It did little to help. Once the match was re-started with a puck-out, John Donnelly collected the ball but dropped his shot short. Note Mullen, free and calling for the ball. 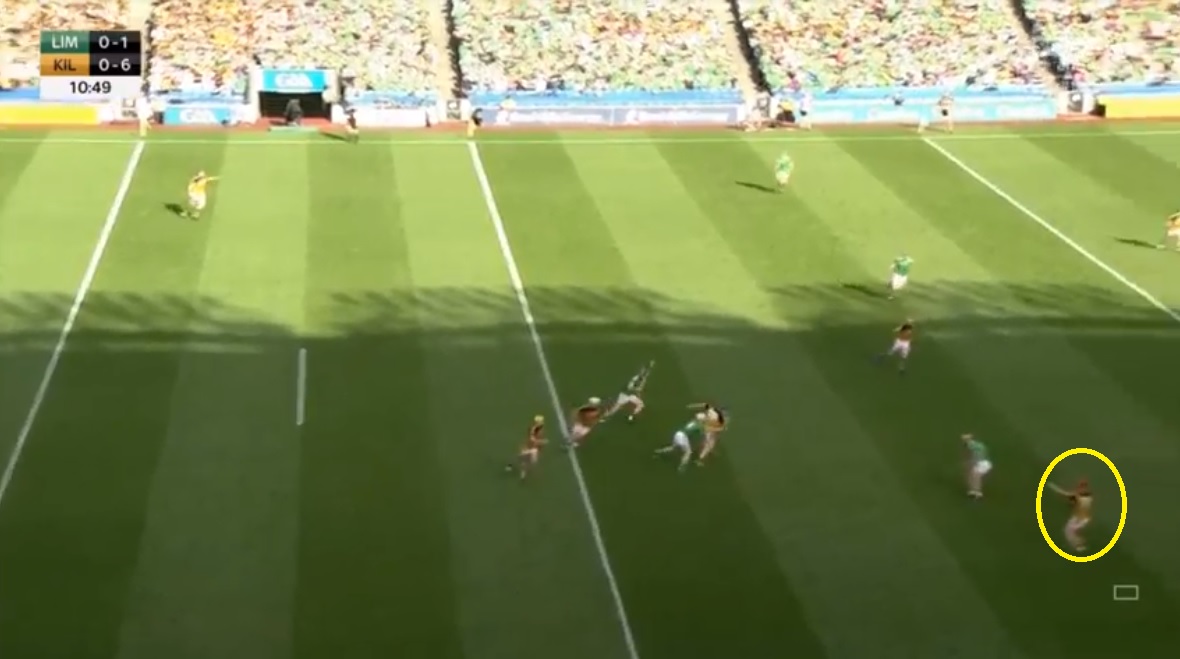 Quaid caught the ball and went short to his cornerback.

But Mullen races in after the shot and makes sure Limerick cannot clear. He dives to block Finn's attempted pass. 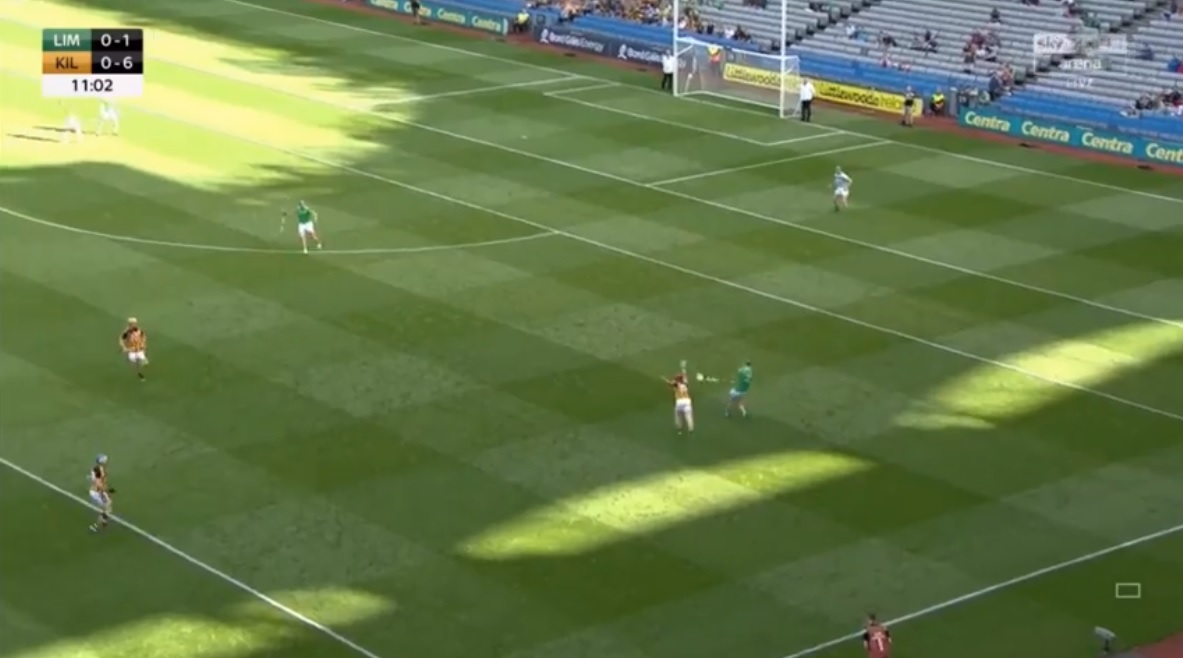 The ball breaks for Donnelly in space with a straightforward shot at goal. However, he hits it wide. 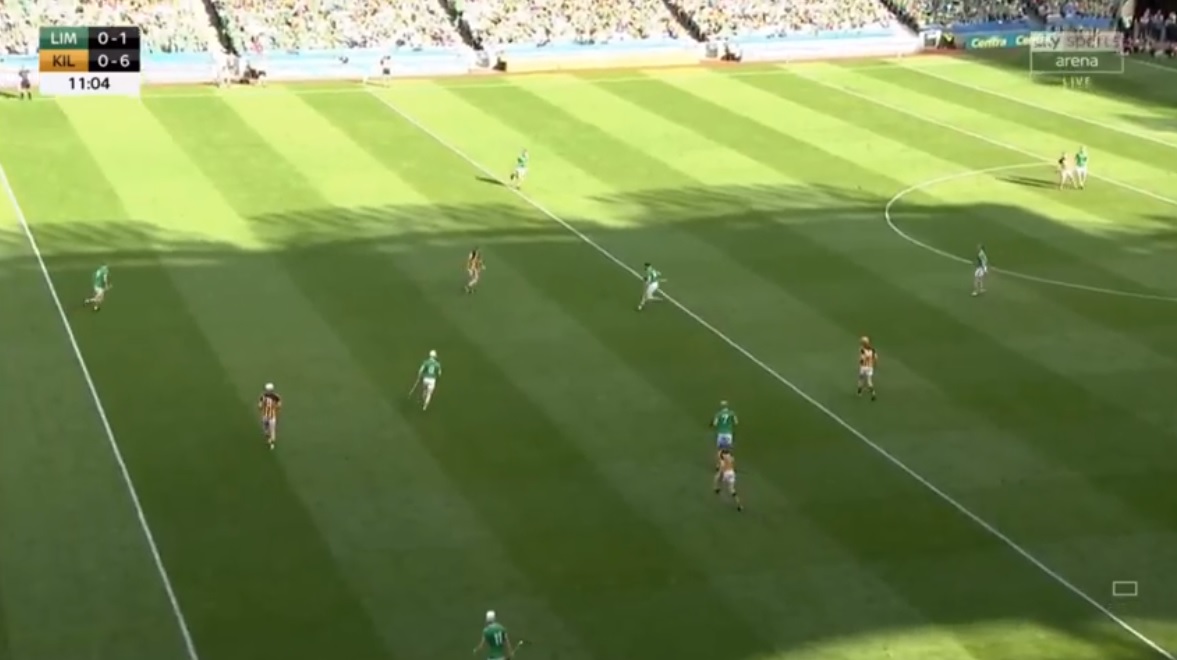 The recent debate around Kilkenny's tactics, or lack thereof, has only been stoked by Saturday's tie. Is it strategy or hard work that powers this machine? In reality, it is a little bit of both.

Of 30 Limerick puck-outs, they won 18. Quaid's long target of Gillane was cut off by Walter Walsh dropping deep, the other side of the field was cut off as Kilkenny overloaded players there. 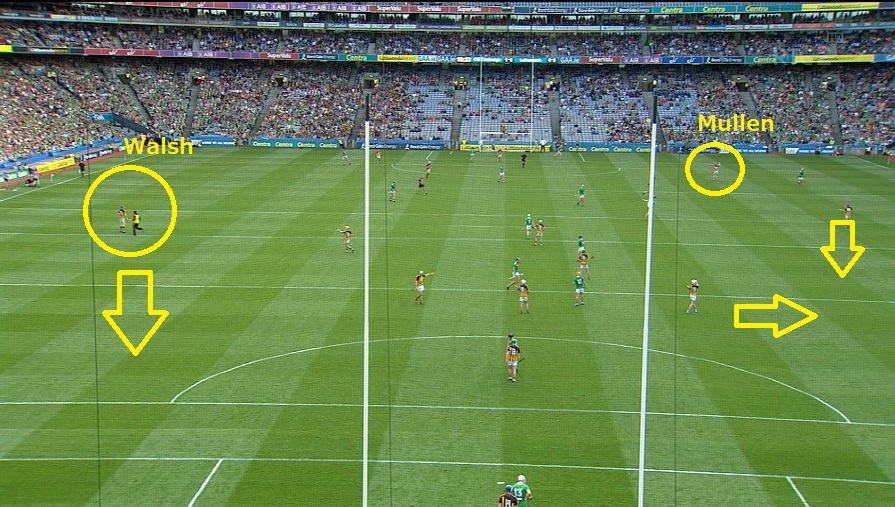 Options were further limited by Mullen's strategic positioning, as demonstrated above.

Planned positioning to get things started, relentless intensity to get things done. It's exactly as Henry Shefflin outlined in his autobiography.

There were tactics, such as that famous 2012 All-Ireland final against Galway: "It wasn't my own call that finally set me free in Croke Park, it was Brian Cody's. Legend has it that I decided to take charge of business maybe twenty minutes into the first All-Ireland final, moving myself to the '40. I didn't. Mick Dempsey came running in with the instruction and, suddenly, I was at the pitch of the action, feeling empowered to make things happen."

And there was old-school belief, such as before the 2006 final against Cork: "Our very existence as county hurler had been on the line that summer and, really, in our eyes that overrode any need for managerial gimmicks. There wasn't even much roaring and shouting in our dressing room before the final. People knew exactly what they had to do. Brian Cody's most repeated expression is that 'Hurling is a simple game'."

Limerick responded to this with a Graeme Mulcahy score. Eoin Murphy goes long from the resulting puck-out. 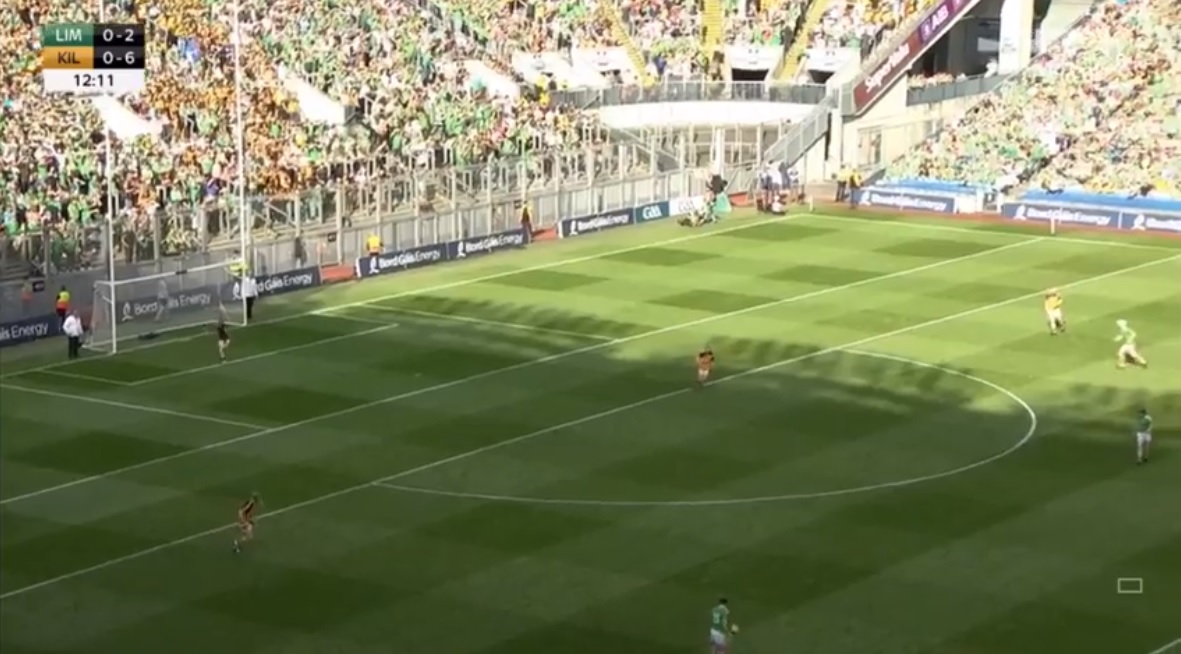 The ball breaks for English. 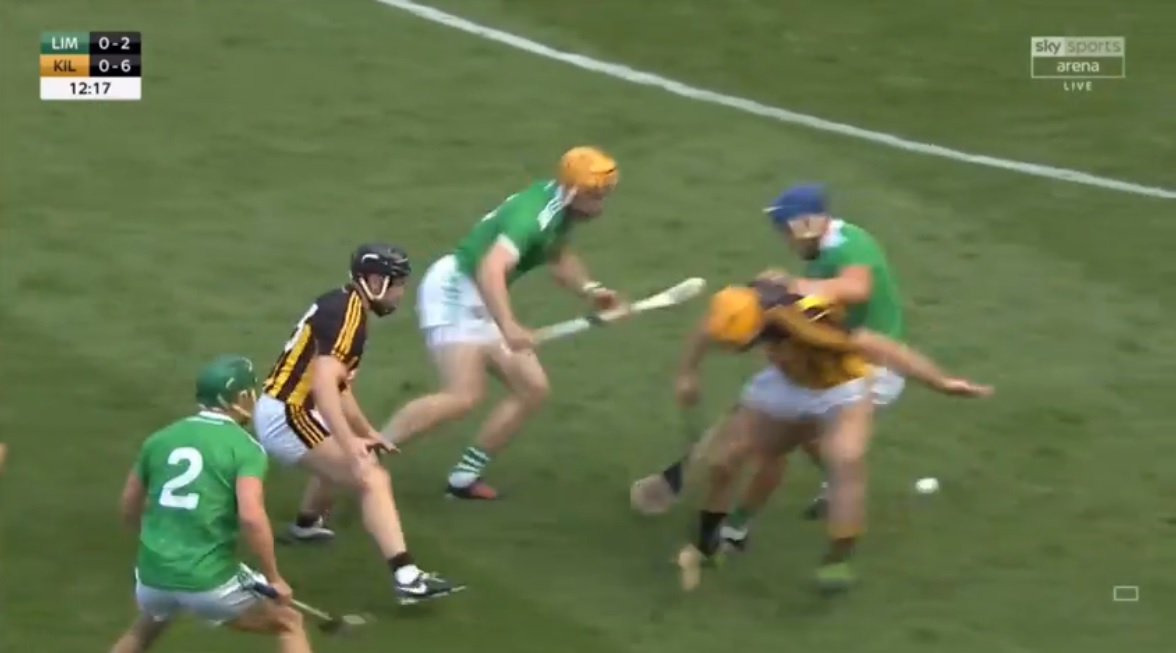 Fennelly and Mullen hunt after him and block down the clearance. 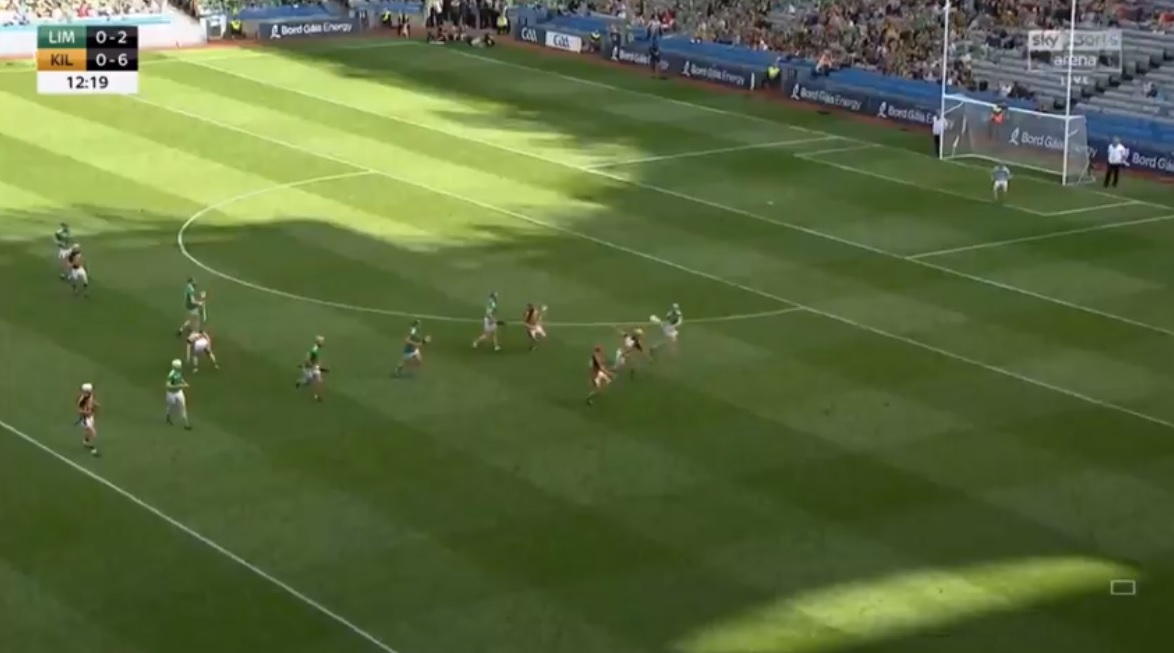 The attempted pass falls short. Once again Mullen sprints to the ruck and the ball breaks again. 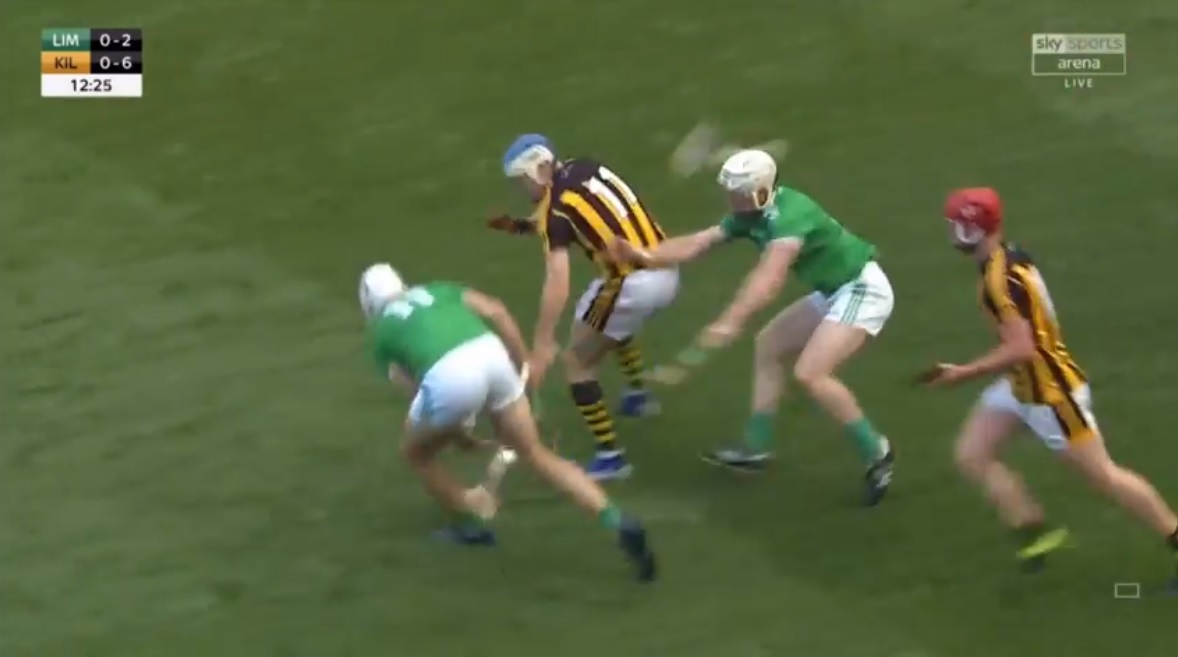 Mullen is first to the ball. He plays a brilliant pass to Richie Hogan, who handpasses to the oncoming Padraig Walsh. Walsh hits a score. 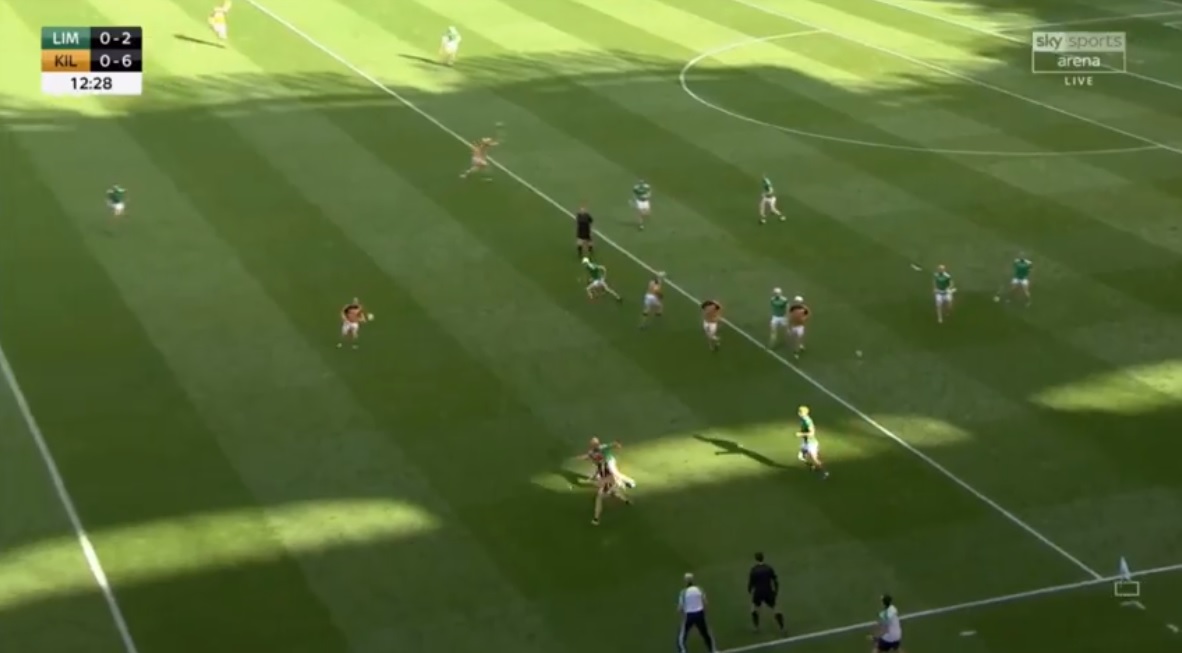 What's all the more incredible is the year Mullen has done it in. His first campaign as a Kilkenny hurler. Brian Cody's test is notoriously difficult. it took TJ Reid, Richie Hogan and Richie Power much-longer to pass.

Other underage prospects got opportunities at senior level and endured worse. Consider the case of talented minor and U21 Brian Kennedy, who in his Championship debut season was taken off after 28 minutes against Offaly for Kieran Joyce. he'd go on to make one more appearance before he was cut from the panel entirely in 2016.

Adrian Mullen looks like he is going to be everything Kilkenny hoped he would be and more!!

"Adrian was part of a talented crop," outlines O'Sullivan. "He's lucky to be coming along not just with his brothers but with a wider generation. Eoin Cody, Evan Shefflin and Dean Mason are all on the current U20 Kilkenny team with him. He has won a Minor A and two U21 As. There's a generational swell in Ballyhale." Familiar with success and hungry for more.

Adrian Mullen was breed with hurling in his blood and he was forged in the Brian Cody cauldron. The last challenge is securing the only prize that matters in Kilkenny to mark it.