Dublin and Kerry meet this weekend in what could be an All-Ireland final for the ages.

It sees a history seeking Dublin team aiming to win a fifth consecutive All-Ireland title while Kerry's young guns look to inflict the pain on Dublin which Offaly did to the Kingdom in 1982.

The Dublin defence is amid its stingiest championship of the decade. On average this summer, Dublin have conceded just 12.1 points per game. That is a sharp decrease from last year's number of 15.4 points per match.

In contrast, a Kerry defence has never conceded more points per match this decade than this year. 17.2 points allowed is a 2.6 point increase from last year. Though that was one in which the Kingdom did not advance beyond the Super 8 stage.

In attack, Dublin are averaging 27 points, 4.8 more than Kerry. It is, in terms of average points score per match, Dublin's second more prolific of the decade. Just last year, with 27.5, have the Dubs managed more. Should this year's number rise above 27.5, it will mark the third consecutive year in which Dublin have increased their scoring average. 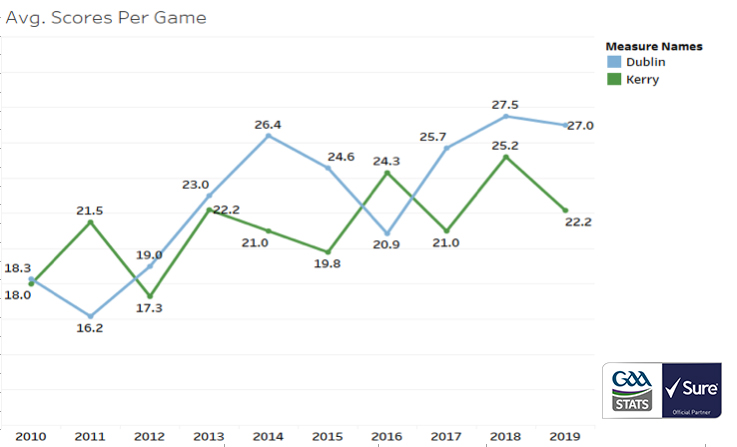 Only twice (2011 and 2016) this decade have Kerry scored more points per match than Dublin.

This summer, 72 per cent of Dublin's scores have come from play. Kerry are slightly lower with 69 per cent. Despite taking 50 fewer shots - 233 vs 183 - Dublin's shot efficiency (67 per cent) is two per cent better than Kerry's.

Though, when it comes to placed balls, Kerry have been more accurate with 86 per cent of kicks scored compared to Dublin's 81 per cent.

If Kerry are to win on Sunday, they need to take care of the ball as Mayo did in the first half of their semi-final against Dublin.

The good news for the Kingdom: they match-up well to Dublin in retaining possession. Both have averaged 50 per cent of the ball in the championship while both also have 90 per cent foot pass success.

80 per cent of Dublin's attacks have resulted in shots and 53 per cent in scores. Kerry's numbers are similar with 76 per cent and 50 per cent respectively.

Dublin's ability to pilfer opposition kickouts is better than Kerry's. The Dubs have nabbed 30 per cent, while Kerry's is considerably lower at 22 per cent.

Some of Gaelic football's most exciting forwards will be involved this Sunday. Two of them will wear the number 13 jersey: Paul Mannion and David Clifford.

Remarkably, in 27 fewer championship games than the 26-year-old Mannion, the 20-year-old Clifford has scored only 2-19 less.

Mannion has made 37 championship appearances since his debut in 2013, racking up 6-59. That's an average of 2.1 points per game.

Clifford made his senior debut last year. In 10 championship appearances, he has scored 4-40, an average of 5.2 points per match. 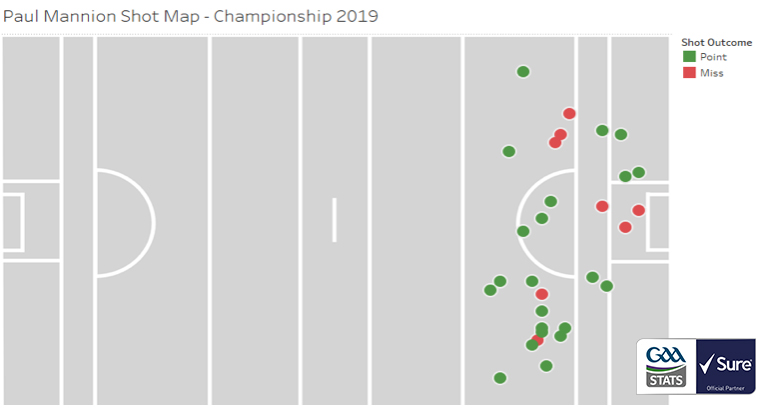 Both have scored 0-22 this season. All of Mannion's scores have come from play, while six of Clifford's have been from placed balls.

Both players favour their left foot, though Mannion (83 per cent) more so than Clifford (66 per cent). 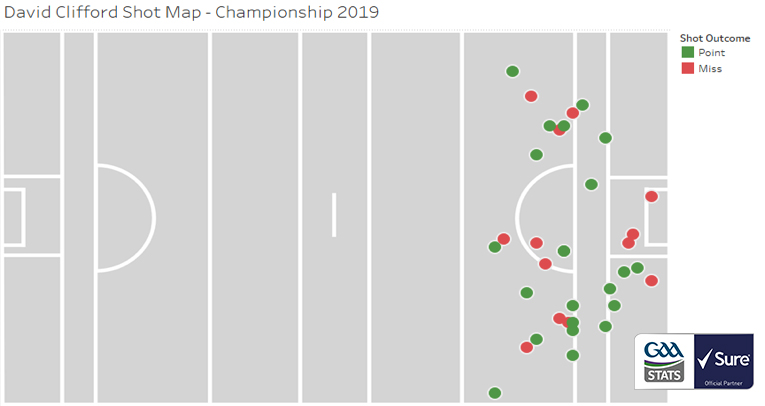 There is a chasm in experience when it comes to the men between the posts for Dublin and Kerry.

Stephen Cluxton is the master - the all-time record championship appearance holder and six-time All-Ireland winner.
Shane Ryan is the rookie, he made his championship debut this season.

Clubmate and Kerry teammate Paul Murphy told Balls earlier this year that Ryan is a "reluctant goalie". The Rathmore man, a minor All-Ireland winner in 2014, never played in goals for the club. He was converted to a keeper when he joined Kerry's underage development squads.

Cluxton is the launching point for Dublin attacks, the man who creates a stable platform from which Jim Gavin's side land blows.

"When you get into these pressure cooker environments midway through the second half - full house - Stephen is the best in the business at that and he does it so calmly and so effectively," 2011 Dublin All-Ireland winner Barry Cahill told Balls this week.

The guys out the pitch know that as well, the middle eight in particular. They're all well tuned in, whether it's making dummy runs or selfless runs away from the ball to create space. Stephen with his pinpoint kicking just nearly lands it on their chest.

This season, 83 per cent of Cluxton's kickouts have been won by Dublin players. Brian Fenton (15) has been his top target, followed by James McCarthy and Davy Byrne (both 12).

Kerry have won 76 per cent of Ryan's kickouts with Paul Murphy and Gavin Crowley (both 14) being his main targets. Tadhg Morley has been targeted 10 times. 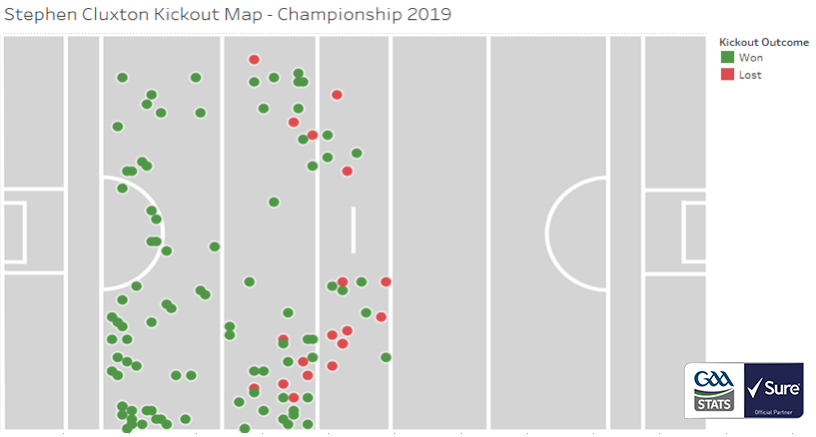 Remarkably, not one kickout which Cluxton has landed within his own 45 has been lost. In contrast, Kerry have lost eight kicks which Ryan kicked to the same area.

In terms of kickout selection, Cluxton has gone short (inside the 45) with 46 per cent of his kicks while Ryan is higher with 55 per cent.

The right-hand side of the pitch - and in particular close to the sideline - is Cluxton's favoured area with 65 of the kickouts won aimed there. 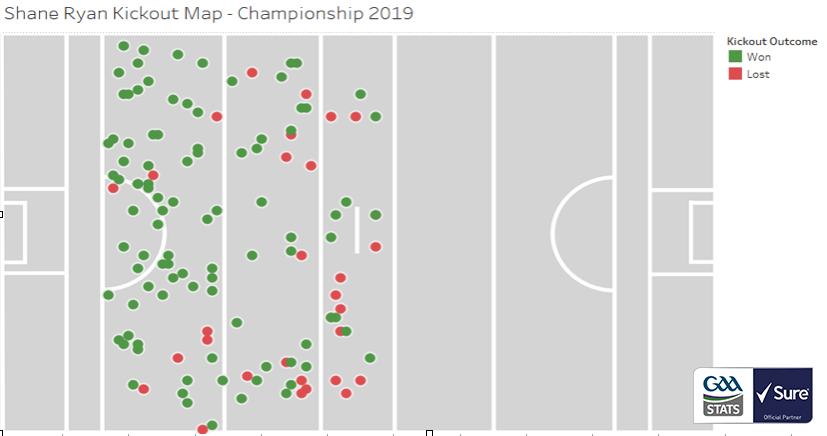 See Also: 'I Love Speed. Liam Challenged Me To Bring Some Element Of That To The Team'