Lads, It's February: Calm The Feck Down About League Results

After a 13-point humiliation at the hands of Clare - their second defeat on the bounce - not a single daring soul has decreed Kilkenny to be 'finished'.

Rightly so, too. We're all aware that, as tempting as it might be to blindly write them off in one fell swoop, they'll make us eat our words in August and September. Similarly, had the Dublin footballers lost to Tyrone on the back of a short preseason, it's unlikely we would have heard the chimes of doomsday bells from fans or media outlets - even allowing for the obvious furore that would have surrounded the conclusion of their unbeaten streak.

Our general acceptance that the league is largely a transitional, feeling-out process for the perennial winners begs the question as to why we don't apply the same pragmatism to the rest. For the love of God, it's only February.

Pat Spillane's a divil for the sweeping write-off. When Mayo - minus Lee Keegan amongst others - lost their first league game to Monaghan, he rendered them all but done for the year.

Spillane later addressed the inevitable backlash, calling out the 'keyboard warrior' contingent amongst the Mayo faithful. He wrote in his column:

My message to all the Mayo fans out there is simple: don't be jumping on your high horses every time I criticise the team.

Forget about the messenger and instead focus on addressing shortcomings.

Remember, as well, that while one defeat doesn't necessarily make Mayo a bad team, one victory doesn't make them a great side either.

And what happens in February will certainly be long forgotten come September.

All of which takes us nicely back to Spillane's comments which had so effectively riled the Westerners less than a fortnight prior... 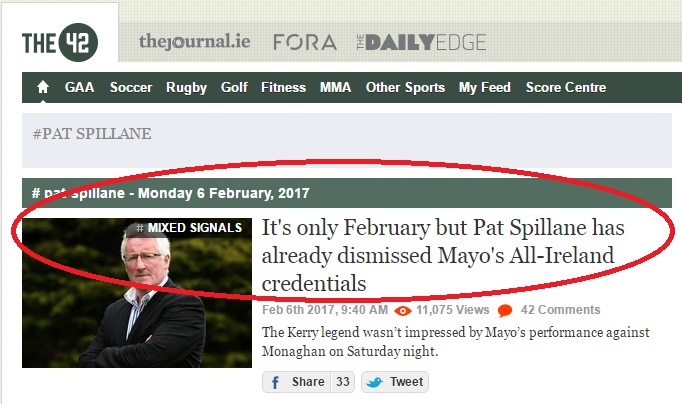 The Kerry legend was speaking on RTÉ's League Sunday when he announced that Mayo's opening day defeat had been a wasted opportunity to 'send signals' that they were a side with All-Ireland credentials. And God be with the days when a poor league campaign didn't destine a side for Championship failure.

Sadly, the signals were mixed and poor. Monaghan were up for it mentally, physically, bullied Mayo out of the game. As signals and signs go for the year ahead, not good signals out of Castlebar last night.

For years you hear ‘it’s only the League, everything will come right by the championship’ but nowadays the League is so competitive. Full-strength, close to fully fit.

Jesus, Pat. You said it yourself. It's February.

What he neglected to mention, however, is that Mayo themselves didn't even make the league semis last year, instead finishing fifth in Division 1, and later came within a hair's breadth of beating all-conquering Dublin in an All-Ireland final. And as for Mayo's All-Ireland semi-final opponents, Tipperary? Third-last in Division 3, having drawn with Limerick, Westmeath and Sligo, and having been beaten off the park by Longford and Kildare.

Cavan flew up from Division 2 alongside Tyrone before being beaten out of sight in an Ulster semi-final replay against the same side, ultimately succumbing to fellow Ulstermen Derry in the qualifiers. Conversely, Westmeath were relegated from Division 3, and went on to face Dublin in the Leinster final. And if ever there was a county which symbolises the frivolity of football league success relative to Championship, it's Roscommon.

Even with all of this in mind, a brief reminder that it's February.

The incessant need to build teams up only to eviscerate them again is equally prevalent in the small ball game.

In week one, Shane Kingston's Cork debut brought a resounding victory over Clare, and was heralded as a Rebel yell of sorts; the beginning of hurling's resurgence on Leeside after a relative aeon of depravity and despair had seen Cork amass more league points in one night at Páirc Uí Rinn than they did during their entire campaign last year. Conversely, the problems were mounting for last year's league champions Clare, who were deemed rudderless and lacking in intensity, and in February of all months.

Fast forward to week two, and Cork are absolutely shagged again, while high-flying Clare's destruction of Kilkenny must surely mean the post-Davy era will bring silverware.

Ger Cunningham's Dublin were considered to be - by a considerable margin - the most hapless team in Division 1A, and arrived on the banks of the Lee following a 16-point defeat to Tipp on opening weekend. They were so bad that fans and scribes alike scoffed at the mere notion that they could come away with anything from the game. Bear in mind this is a Cork team whose only two significant victories in the past 12 months have come in a league relegation playoff last March, and in the first round of qualifiers last July - the latter albeit arriving against Dublin.

The media narrative subsequent to Dublin's victory at Páirc Uí Rinn dictated that Cork 'had been brought back to Earth', even though having attended the Rebels' victory over Clare, the extent of pre-Dublin optimism amongst Cork supporters went about as far as, 'maybe this young team won't be as irredeemably shite as we've been in the last few years'.

Alas, back to the doldrums go Cork with their litany of defensive problems, while a buoyant Dublin welcome Waterford to Croker on March 4th. Clare, Cork, and Dublin. Three seasons turned on their heads within two weeks. And in fecking February.

And as for Galway... Jesus, poor ol' Galway can't catch a break. They put 6-23 past Offaly in week 1 (4-09 in the first half alone) in a predictably facile victory, and yet one Galway wildman took to Northern Sound midweek to declare that defeat to Wexford would signal the end for this current crop of Tribesmen.

A shame, then, for one of the game's greats in Joe Canning, who could only manage 20 minutes off the bench having spent the past five months battling back from literally tearing his hamstring muscle off the bone. Sure he needn't have bothered; Galway are a million miles off All-Ireland contention, having been relegated to 1B by lowly Cork last season, and having only come within a puck of a ball of eventual champions Tipperary in an All-Ireland semi-final five months later.

Perhaps it's the frenetic nature of both codes, or the passion and emotions they evoke, but GAA fans, pundits, and writers alike absolutely revel in blasting teams to hell at the end of 70 given minutes.

A rabid lust to roar about 'bottlers' and under-achievers festers over the course of late autumn and early winter, the silence of the inter-county off-season uncomfortable and unbearable. But then, while Dublin warm the legs in Jamaica and the rest of us flex our thumbs for the exciting year ahead, word reaches us from the north of the increasingly loud, annual McKenna Cup purge. 'Oh Christ. We've lost Donegal'.

Then comes the league. And the dam breaks. It's a goddamn free-for-all, and dozens of seasons are washed into the abyss long before they have a chance to get started.

That is until they begin again in the summer, all of February's woes forgotten, and the team known almost exclusively throughout the spring as 'Fecking Mayo' go on to reach another All-Ireland.

It's competitive. It's enthralling. It might actually be more entertaining than the Championship, and it can certainly point teams in the right direction. But for the love of all that's holy, it's still only the league, and it's February.