Balls Remembers: When America Worshipped At The Altar Of Christy Ring

Authorities at Shannon Airport never saw it coming. It was mid-May in 1966 and nothing could have prepared them for the busload of Blackpool folk, pulling up outside the departure lounge alongside a cavalcade of overflowing cars, immersed in pride and ecstasy, and intent on giving their own Christy Ring a worthy send-off.

He wasn’t emigrating. He had just been invited to take part in the Cardinal Cushing Games which, given the world was a significantly smaller place, were viewed as a privilege for every man and club and parish represented.

The event was organised as a fundraiser for Cardinal Cushing's Missionary Society of St James, with the funds gathered being directed towards the society's missions in Peru. As a devout Catholic, Ring was never going to sidestep the adventure, despite being at a stage of his career when joints and muscle took a little longer to get going in the morning and despite the fact that he was carrying an injury sustained in the no-victims-spared terrain of the Cork senior championship.

The eight-time All-Ireland winner was still honoured to be asked by the event's organiser, John 'Kerry' O'Donnell, as were family and friends, and Blackpool and Cloyne locals who saw the veteran hurler as one of their own. The burning pride of that end of the county ultimately led to the unexpected invasion of Shannon where they swooned and hollered for the understated Ring, feral scenes that made it difficult to believe that he would only be away for just over three weeks.

And the fanfare didn’t stop at the gates of the Irish airport, with news of Ring’s itinerary travelling across the pond and subsequently greeting him appropriately upon his arrival in New York. In fact, the scenes on US soil made the antics in Shannon seem like a Victorian tea party.

Red Smith, a Pulitzer-winning sportswriter, wrote of the arrival of “Hurling’s Babe Ruth”, and of the sports journalists awaiting the man they had heard so much about. A healthy assortment of American hacks had assembled in the lobby of the Times Square hotel, having heard all the legendary yarns, all of which had piqued their curiosity within the newsrooms of the city.

“He would look, they assumed, like a man suited to pound a beat in Hell’s Kitchen," wrote Smith. "Then they met him.

Christy Ring is slightly bigger than a scupper of Guinness. He has small compact features, bright blue eyes, and thinning blond hair. He does not talk much and when he does it’s well to listen sharply, for County Cork softens and broadens its accent, blurring it for American ears.

Upon seeing the legendary hurler in the flesh, a Sports Illustrated writer described a man “with strong legs and hands that could choke a bear.” The magazine continued to write in glowing terms of the Leesider, and though perhaps having a tenuous grasp the sport they were able to distinguish Ring as a truly extraordinary athlete.

“He is by far the best of an exceptional group of athletes because he possesses to an extraordinary degree the physical attributes of a great athlete, plus a competitive urge that after 16 years of championship play, still makes him leap in the air with glee when his team scores.”

The exaltation of the 45-year-old had yet to summon the masses though. It wasn't until the Cork hurler arrived to a sold-out Gaelic Park did the extent to which his mythical status stretched become apparent. Hordes of Irish-Americans squeezed into the venue dubbed by some in those times as the Bloodpit of the Bronx, like the congregation of a Southern evangelical conference, inspired to get as close as they possibly could to the deity. Over 8,000 crammed into the grounds to be dazzled. And for all the talent on display, some of the very best players in Ireland making the journey across the Atlantic, there was only one show in town.

Years of toil playing for club and county and province didn't deprive the expecting spectators of Ring's magic, the following morning's Irish Independent reporting that he “displayed much of the wizardry of his earlier years when he spurred Limerick to victory over Galway.” 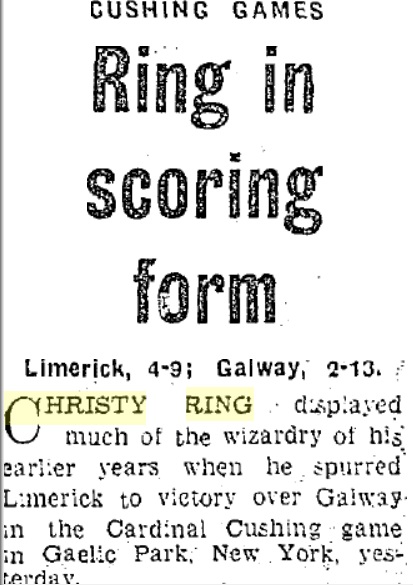 His haul of 2-3 when crossing county lines for Limerick was enough to see him carried off the pitch by players and supporters - not for the first time in his career - and began the calls for him to be recalled into the Cork senior hurling squad before the start of the 1966 hurling championship.

Even for the quadragenarian it was a formidable feat, especially given that fact that he was still feeling the after-effects from taking on eager players half his age only weeks previously. But as O’Donnell told journalist Val Dorgan, a close accomplice of Ring, years later for the unofficial if not definitive biography of the hurler's life, he would “bring him over if he was on crutches.”

Alas, Ring informed Cork’s selectors shortly after he came home that he was not fit enough to tog out with the intercounty side and, with that admission, the dream died. Fortunately for those who crammed into Gaelic Park, they were gifted with what they saw as a once-in-a-lifetime opportunity at a time when Muhammad Ali, Pele and Wilt Chamberlian were picking apart opponents in their own respective spheres.Ring wasn't one to disappoint his disciples and he duly delivered in the Bronx.

The Cardinal Cushing Games were a rip-roaring success. But, in truth, it was always  a one-man exhibition. Organisers knew it, attendees knew it and the ever-humble Ring could, quite simply, never deny it. 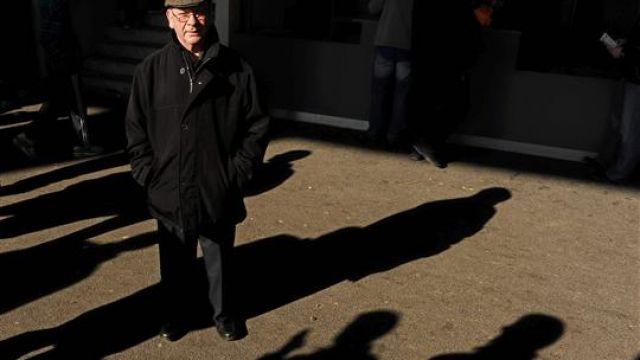 GAA
2 years ago
By Maurice Brosnan
How Cork Legend Diarmuid O'Sullivan Helped The Down Hurlers This Year
GAA
5 years ago
By Conall Cahill
The Christy Ring Saga Is Now At An End As GAA Make Final Decision On Replay
GAA
5 years ago
By Conall Cahill
Opinion: We Need To Stop Blaming The GAA Over The Christy Ring Mess
Popular on Balls
Basketball
7 hours ago
By Eoin Harrington
Kieran Donaghy And Tralee Warriors Claim National Basketball Cup Title In Tallaght
Rugby
7 hours ago
By Colman Stanley
Michael Lowry Backs Up Farrell's Faith In Him With Superb Display For Ulster
Rugby
10 hours ago
By Colman Stanley
Jimmy O'Brien Announced His Arrival On The Biggest Stage This Afternoon
GAA
11 hours ago
By Eoin Harrington
Watch: Outrageous Score Helps Ardscoil Rís To Dr Harty Cup Victory