RTE's big guns, the guys those in the game deride as 'the entertainers', delivered their opening turn in Championship 2016 yesterday.

The GAA's curious decision to schedule only one half decent game for this weekend left more time for chat. A little more conversation, a little less action.

So bare was this weekend's programme, that the evening Sunday Game didn't even last an hour. For today, we will analyse both the afternoon and evening edition. 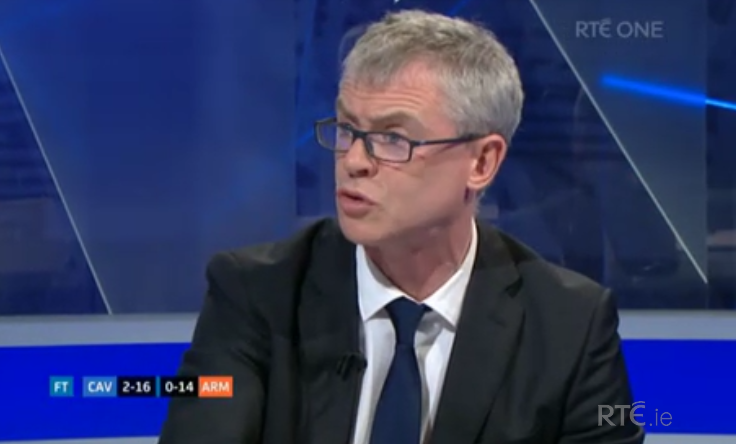 The afternoon show was 80% devoted to hammering home the notion that the'Geezer' isn't anywhere near good at this management craic. Unfortunately, that includes the game itself as well.

In fact, it wasn't enough to say McGeeney was no good, the lads set about saying he was actively harmful to the sport. He just about stopped short of saying that he was a cancer within the game (as Dunphy labelled Ronaldo once).

Joe and Colm O'Rourke used to spend their days on the Sunday Game panel poking and jabbing and contradicting one another. Yesterday, there was an almost glutinous degree of harmony between the pair. Both subscribed to the view that Kieran McGeeney's management style is an abomination and encapsulates everything that's wrong with modern Gaelic football.

Joe laid it on heavy, insisting that McGeeney was the axis around which all that is bad in Armagh football turns. His testimony was replete damning anecdotes picked up from conversations with insiders and jabs at the GPA. It was a televised version of his recent Sunday Independent columns.

Colm continually referenced Jamie Clarke and Aaron Kernan's absence, leaving the thought hanging in the air like a question mark. The implication was that McGeeney's approach drives these lads away - despite the fact that Jamie Clarke is no longer playing for Crossmaglen either.

Spillane and Brolly managed to disagree this week, while not even appearing on the same programme and also agreeing on the central point.

Pat going out to bat for Kieran McGeeney on the evening show was interesting, especially when he asserted that Brolly was talking horseshit on the Crossmaglen claims, saying that it was his understanding that McGeeney had nothing to do with their decision to opt out.

Cognisant of the fact that half the GAA world is now boycotting the Sunday Game, Des spent the evening show trying to get the lads to say nice things about Kieran McGeeney as a tactician, without much joy.

Des's tone resembles that of a well-meaning parent gently trying to persuade his surly, sulking kids that they did have a good time at the museum after all.

They upped it on the craic front this week, principally thanks to the genius of Joe Brolly. The man is wasted on the social media audience.

Naturally, his and Colm O'Rourke's long discussion - which rambled across terrain such as Kieran McGeeney, Armagh's exiles, Tyrone's development, Kieran McGeeney, Seanie Johnston, and Kieran McGeeney - incorporated a reference to the Land Commission of the 1930s.

He reminded the world that Colm O'Rourke's people, of Leitrim stock, had, like so many westerners, been given a few acres out in Meath in the early days of the state.

It was the first reference to the 1930s Land Commission in the current season of the Sunday Game.

Elsewhere, he praised Seanie Johnston as one of the finest dual players in the game, noting how far he had come in the past few years.

This guy, after all, was a club hurler.

Lyster interjected with a belter of an anecdote, saying he heard about one guy who had pushed through a transfer so he could break a certain opponent's nose.

The efforts at craic had a more conventional feel on the evening show, with Des Cahill welcoming Pat back from his holiday with a hearty reference to thongs and walks along Californian beaches. Following the Cavan-Armagh highlights, Pat revisited the comment by thanking Des for the loan of the thong. 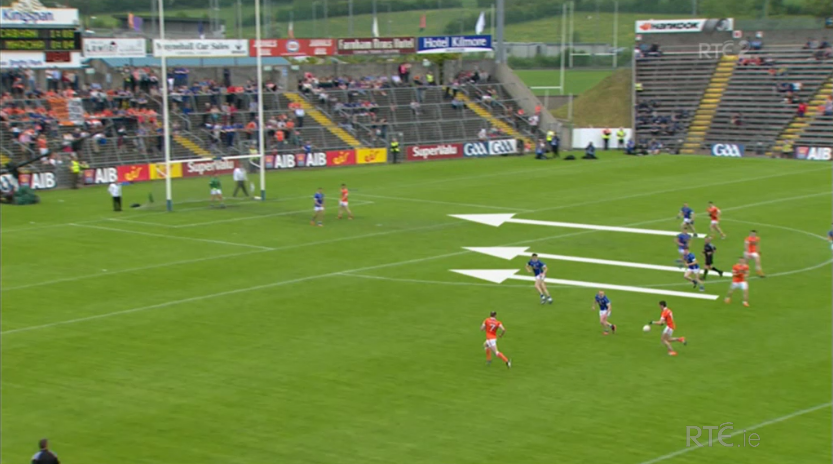 We turn to what the RTE graphics department dubbed 'Armagheddon'.

Spillane and the lads in the evening made the graphics department work for their money. Pat was contemptuous of Armagh's forward movement. Lateral, slow, cumbersome, all his favourite pejorative words present and correct.

As he has been doing for the guts of twenty years, he speculated that their real problem may be too much time in the gym and too little time on the pitch.

Gym work remains the blight on the game.

Dessie predicted an Ulster semi-final defeat to Tyrone, highlighting their loose defensive system and the lack of cover they offer their full-back while Whelan's grinding intelligence was on show at all times.

Pink ties galore. The older set tend not to be engaged in a battle to upstage one another in the fashion stakes. Our style correspondent found their suits run-of-the-mill and unprepossessing. They may even stop watching the programme from now on.

Dessie Dolan was docked a point for this shameless post-show fashion plug.

Thanks to Remus Uomo for 3 piece suit shirt and tie&tan Bugatti shoes all supplied by Donnellan & Co Roscommon pic.twitter.com/Q18ZrvKyZH

Brolly unchained. Romps to victory again. Expect to see the motormouth from Dungiven (Londonderry Lip? Best not call him that) at the top all year.

Any Other Business: Mayo for Sam count

For whatever reason, Des Cahill was particularly scandalised by Pat's description of Mayo of All-Ireland title 'dark horses', and refused to let him away with it.

For all that, Pat let us know he has a strong fancy for Mayo this year, expressing very high regard for their current management.